Apollo bubble regulator watch – a kickstarter for the heavens 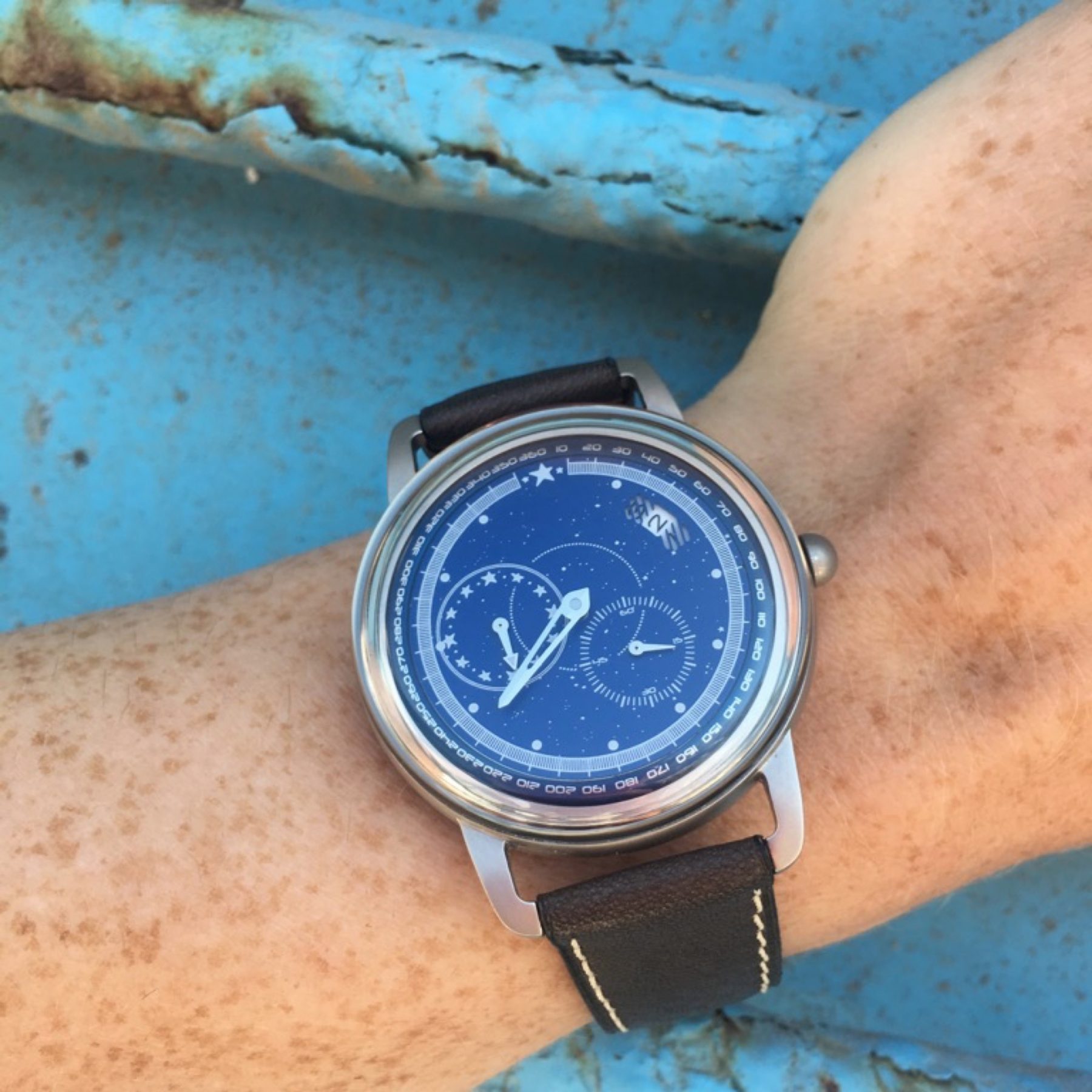 It would be unusual to compare this watch to the Patek Phillipe ref. 6102 – but the two share two things in common – they’re both timepieces, and both depict the stars, fiery balls of flame so far away that we only can see what they looked like in the past. Instead of a Patek, what we have is the Apollo, named for the Greek God of Sun and Light. Housed in a case similar to the CJR Commander we reviewed recently, or the The CJR Airspeed Regulator we reviewed last year, the bubble covers the dial and the movement in lieu of a case back. The mid case is steel and carries the lugs as well. The lugs aren’t straight, exactly – they’re more like crooked fingers, pointing in towards the strap and spring bar, something we’ve seen on some of the Rebeltime watches we’ve covered in the past. Straps will be leather and employ quick-release spring bars. The dial is where the fun lies. There’s a large star at 12, accompanied by two smaller stars on either side of it. The seconds and 24h subdials sit among a sea of other, lesser constellations. The 24H subdial is composed of a star at each hour. The minute track lines the periphery of the dial, and outside of that at the circumference are the 360 degrees of the circle, demarcated every ten degrees. Somewhat unusually for regulator watches based on the Miyota movement, there’s a date window at the 2 o’clock position. The movement is one we’ve seen before. It’s our old friend, the Miyota 8219, seen in CJR’s regulators, the Spinnaker Hass, or even the SEVENFRIDAY regulator we reviewed recently. This is a movement that gets around from the affordable watch up to the expensive, because it’s reliable, if not highly accurate. We would feel comfortable wearing any one of these watches with the 8219 in it, so it should be right at home in the Apollo. It’s worth remembering that the Miyota is not a classical implementation of a regulator. A regulator clock used to be comprised of a central minute hand, a sub dial second hand at 6, and a subdial hour hand at 12. When it was 12 o’clock, all the hands would align in a straight vertical line. Watchmakers would have such a clock on the wall in their atelier, so that they could regulate wristwatches to match the time of the clock on the wall. The Miyota movement used here places the seconds subdial at about 4 o’clock and the 24h  subdial at 9 o’clock.

The Apollo is a 38mm watch, 12.75mm tall, although the two hesalite crystals will fool you into thinking it’s thinner, because it’s bound to be such an easy wear – just as some of its forebears have been. The design was performed by Dubai firm iDEA and Associates. We must give them credit, the dial is excellent, and the lugs don’t follow any that we’ve seen on the double hesalite cases in the past. They’ve done good work. Apollo hope to raise 20,000 USD for this watch on Kickstarter. If you’d like a comfortable wearing regulator watch, this is a very good option. There are four variants available. Full Moon is a white dial with black print on black leather with a silver case. Eclipse is a black dial with white print, excepting the stars at 12h and the 24h subdial ring of stars, printed in yellow. These are both Kickstarter exclusives, limited to 999 pieces. Also available are Uranus, a white dial, silver case, on brown leather, or Neptune, a blue dial with white or silver print (it’s a little difficult to tell) in a silver case, with brown NATO strap. So far, Neptune is an early favorite of ours. Early bird pricing is set at $199 USD. Check out the kickstarter.