Bumping Along with the Automat Oro Dato 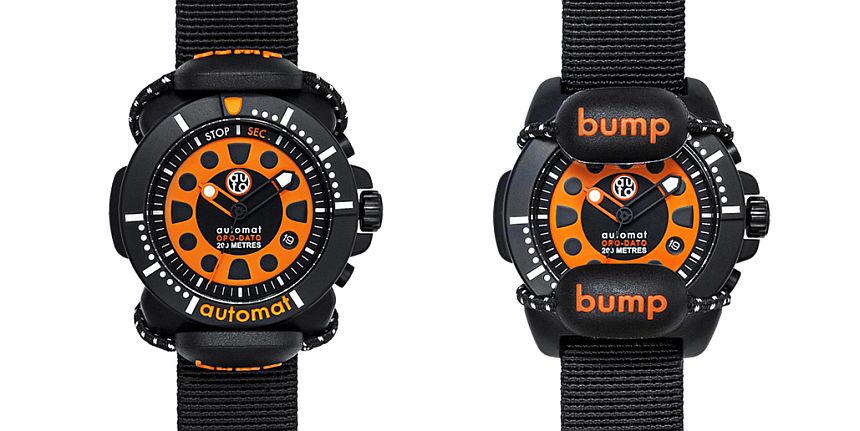 There are certainly no shortage of watches popping up on crowd-funding sites these days. There are so many there days that we have actually dialed back our coverage. A lot of that is due to an abundance of very (VERY) similar watches coming out with little differentiation past a dial color and logo. Then you have something like the Automat Oro Dato that is rather unlike what has come before it, and then it merits some discussion here on these pages. Let’s just get one thing out of the way – the Automat Oro Dato is not – I repeat, it is not – a watch with an automatic movement inside. This name actually comes from an 18th century French toy. Apparently it’s that playful aspect the brand is going for, as they expect you to be playing (or fiddling around with) the straps and shock protection system. Additionally, the brand’s motto (“Nothing Should Be Automatic”) belies what sort of movement we should be expecting. So, now that we have that out of the way, let’s see what brought this watch to our attention. For starters, the Automat Oro Dato is a sport watch that is built for toughness and reliability (as opposed to the ubiquitous slimline three-handers crowding the funding sites). How it accomplishes some of that toughness is actually what drew me to write about the Automat Oro Dato, and that would be the bumper system they have come up with. Most watches that tout some sort of shock resistance have it built into the case and/or movement holder, such that you never see it.

On the Automat Oro Dato, the shock proofing is front and center, in the form of a pair of bumpers that are on a single piece of shock cord, and can be moved onto the watch face (for when the going gets tough), and either moved out of the way – or completely removed from the watch – when you are not going to be, say, bashing up against some rocks. While the bumpers may not be the most elegant way of building shock resistance into a watch, it certainly seems like it would do the job. It calls to mind those watch protectors that were quite popular (mostly on Swatches, if memory serves) in the late 80s / early 90s – albeit a good bit puffier. Suffice to say, the Automat Oro Dato is intended to be a beater (literally), one that hits the trails and waterways with you. The 46mm case is made of a polycarbonate (reinforced with carbon), so it should be a fairly lightweight watch (70g) on the wrist. The mineral glass on it may not be the most scratch resistant, but it would be a material that you could buff scratches out of if need be. On the dial side of things, it is bold and legible, so reading the time should not present an issue. Well, I take that back. I am a bit torn about the semi-skeletonized hands. While the tips of the handset are filled in, and they ostensibly have different shapes to tell them apart (circular for hour, home plate for minute), keeping the handset sorted could be slightly tricky on the models that have a black handset on a black dial (when the colors contrast, I do not think it would be an issue). For the movement in the Automat Oro Dato, we have a Miyota OS11, which is a quartz chronograph. This is a curious inclusion, as you will notice that there are no registers for actually recording the elapsed time. Looking through the spec (and asking the brand about this), it seems that the central seconds hand is actually the only chronograph register. So, if you want to time something, it had better be under a minute. Or, I suppose you could use the bezel to mark where the minute hand is to get something upwards of an hour recorded. Just an odd choice, to me, as a non-chronograph movement would be a simpler route to go. Of note, there is more of a pure chronograph version (the Chrono-Oro), for those looking for that. Now, lets talk about the price of the Automat Oro Dato. When it comes to a “beater” watch – especially one that is purpose-built to take some abuse – you likely are not going to want to drop a lot of money. Well, this French-designed watch definitely kept that in mind. Pricing on Kickstarter is starting out at around $115 (depending on currency conversions), which is about a 50% discount on what the expected retail is. Frankly, at this sort of pricing (at least at the earlybird levels) makes this sort of watch almost an impulse purchase for anyone who spends time active in the outdoors. I guess the project (which ends on January 1, 2016) will tell us whether or not this bumper system is a hit. For our part, let us know in the comments what you think, and if the bumpers are something you would see yourself using. automatwatches.com