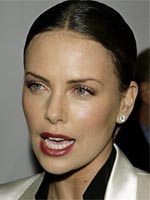 Oh no! Raymond Weil, watchmaker to the Sears, is suing Charlize Theron for wearing another watch or something. I’m saying BFD.

In court papers filed late Monday in state Supreme Court, Weil said Theron signed an endorsement deal saying that from October 2005 through December 2006 she would only wear Weils high-end watches.

That deal allowed Weil to use Therons photographs in its advertisements in exchange for “substantial funds,” court papers said.

Meanwhile, Theron had an endorsement deal to promote a Dior perfume, Weils lawsuit said. The 31-year-old actress “was actually photographed wearing a watch from the Christian Dior line” at a March 14, 2006, news conference at a film festival in Austin, Texas, court papers said. A photo of her wearing the watch is included as an exhibit.

The HourTime Show Asks, What Should Watches Be?

The HourTime Show Wants to Know: How Do You Pronounce Prospex?

In Review: The Casio GSWH1000-1 smartwatch