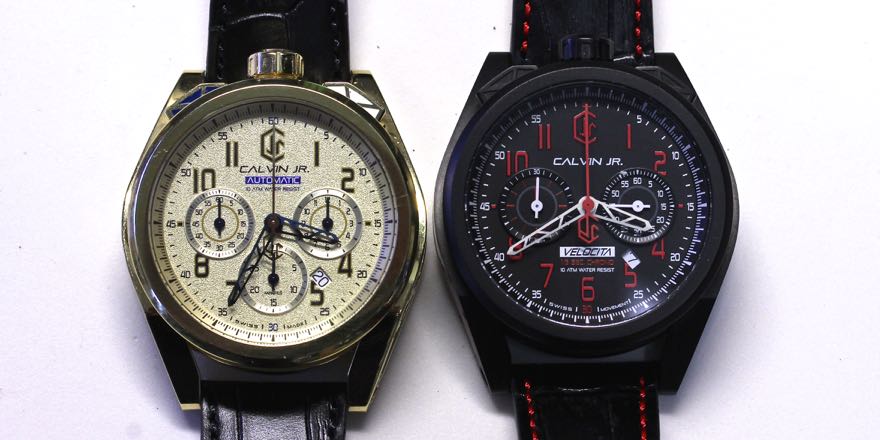 Chronographs are one of the more popular complications for watches, though their actual usefulness can be debatable.  I have one chrono which I wear quite often, though I use the chronograph function fairly infrequently when it is on.  As a timing device, I find that a rotating bezel is usually good enough to time when I put the meat in the smoker, when I need to get back to the parking meter, or how long I have until the laundry is done (have I missed anything?).  But if you want a chronograph to actually time things, the bullhead arrangement, where the pushers are located at top of the watch, is a useful arrangement.  Which brings me to the CJR Watches Velocita currently seeking funding on Kickstarter.  CJR was nice enough to lend me their two prototypes for a hands on review before the funding period ends on August 20. The watches come in two versions, quartz and automatic, with a common case, but unique dials and colors between the two versions.  The quartz is available in grey/green, blue on blue, green/silver/black and black and red.  The automatic is available in gold on gold with black chapter rings and black on black with white chapter rings.  The case dimensions are otherwise the same, with a 45mm diameter case with either a filled or open skeleton side wall and a max thickness of 17mm.  I say maximum, because the watch tilts away from the wrist at the top of the watch, increasing the thickness, but also providing a little extra room to operate the pushers if you leave the watch on the wrist.  It is one of the design concepts that definitely makes sense with this type of watch. As you can see above, working the pushers while the watch is on your wrist leaves the dial open and easy to read.  I definitely prefer the bullhead design if you are actually going to use it as a race timer.  The more standard design with the lap timer pusher at 4:00 makes me crack my right wrist in an unnatural way, while the bullhead feels better. In the hand, it really feels like a stopwatch, albeit a small one.  For single times, I would keep it in the left, but for a lap timer, the right hand feel more natural, with the thumb hitting the pusher and the dial upright and open to read.  The quartz watch has a Ronda 3520D movement, and the Automatic houses an ETA 775 movement.  The two watches I have are prototypes, and the markings on both watches will be modified in final production.  The quartz movement does not have 1/5 second timing, so that label will be removed, and the markings on the chapter rings on the sub dials on the automatic will be swapped, with the 6:00 register as a small second hand and the 9:00 register as a 30 minute chrono hand.  These are some of the hiccups that get ironed out going from prototype to production, and Calvin was already aware of the issues when I reached out to him about them. Probably my biggest quibble with the watch was with the strap.  The strap is has alligator embossing, which just looks a little out of place on a watch that is this sporty.  It is also a little too thin in my mind for a watch of this size, and it is a pretty large watch.  The 22mm lugs might be OK, but the included strap tapers down to 20mm, fine for a slim dress watch, but less so for a big sports watch.  This is also perhaps the only time I am going to recommend against a deployment clasp.  This one works great, but with the watch in hand as a timer, the strap never really gets out of the way.  It is better when the strap is disengaged so the watch can lay flat in the hand.  Again, I contacted Calvin and he understood where I was coming from with this observation, but isn’t sure if he can change the strap and keep the watch at these price points.

(Update) CJR is now offering a free NATO strap to backers of the project.  The project page has images of the watches on the NATO strap. With the design aesthetics, there are a number of features which I liked, starting with the open lattice work on the gold automatic.  The red quartz fills the lattice with a resin, which adds color, but doesn’t otherwise add anything in my opinion.  There are 4 other color options, and the blue and gunmetal quartz, as well as the black automatic, all have open lattice work of the gold review watch, which the stainless quartz is about 1/2 way, with the lattice in relief against a more filled in metal case.  The handset on most of the watches have a similar skeleton look as the lattice, though three of the options are filled and lumed.  The two I had did not have any lume.  I am torn between the open look of the handset and the need for lume, but with the line as it is, there are options if this is your deciding point.  As I mentioned previously, I also liked the way the watch tilts up and away from the wrist , giving more space to operate the crown and pushers, but it does mean that this is going to have a tough time fitting under some shirt cuffs. On the automatic, there is a semi-exhibition caseback, which is probably good enough.  You get to see the part of the movement with very little bridging, but the rotor does end up obscuring a large part of the view if it is not rotated just so.  The quartz has a solid back, which is fine for a quartz.  With about a week left for the campaign, the project is sitting at about 50% of the goal.  There are still early bird quartz watches available at $199 to $299, depending on the model, and the automatics are $1,299.  Overall, there is a lot I like about the watch, though there are also things that don’t resonate with me.  One thing that I do really appreciate is that this is a project that really shows off Calvin’s desire to design his own watch.  So many Kickstarter projects make mention of how they couldn’t find a watch like theirs on the market, and then sell a pretty generic design.  The CJR Watches Velocita is anything but generic. facebook.com/CalvinJrdesign