Diving into the Ocean Crawler Champion 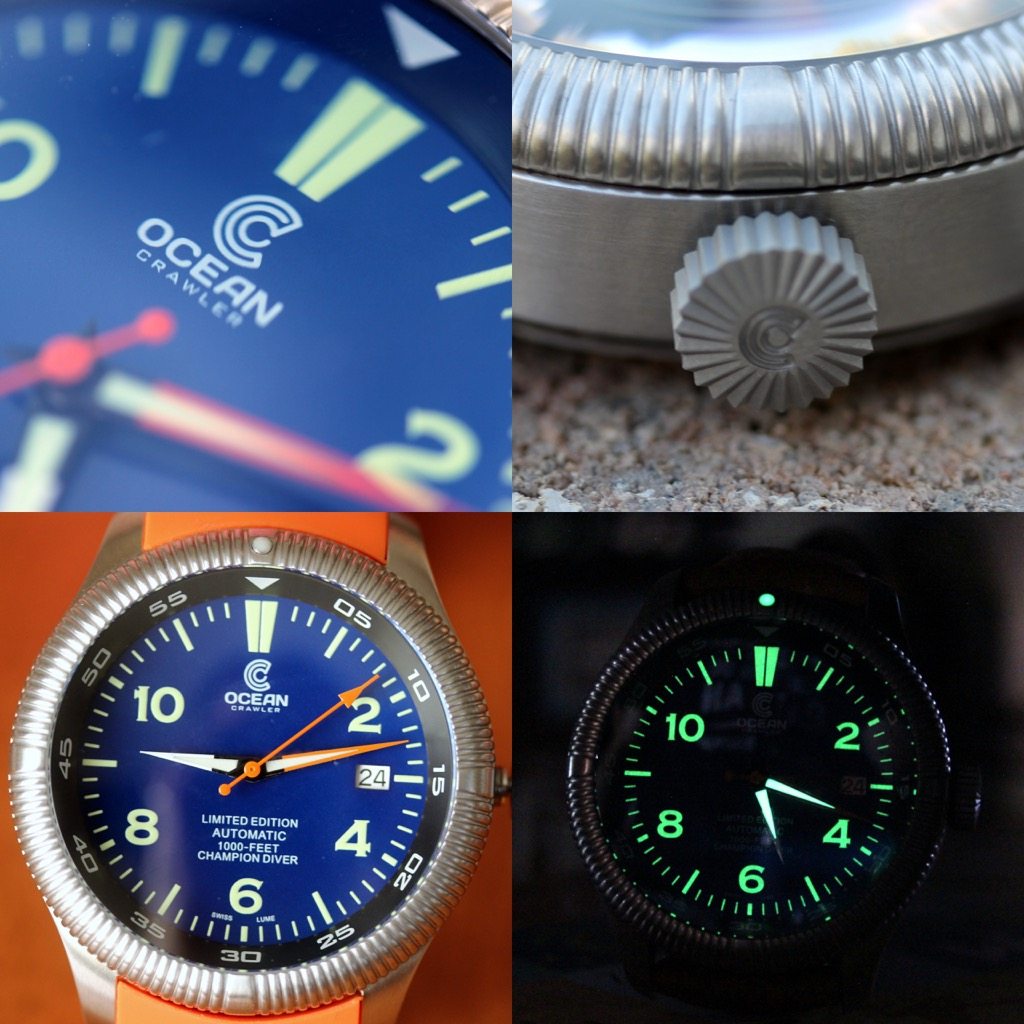 Dive watches are a favored creation of the indie crowd, and for good reason.  For starters, they’re always a popular design.  Even for people who do not dive (such as myself), there’s something about the idea that the watch can handle more than I’d reasonably throw at it is compelling.  Then again, the looks of the watch have a large part to play, and dive watches have some classic cues that appeal as well.  One of the more recent entries into the dive watch segment is the Ocean Crawler Champion Diver. Before I ran across the Ocean Crawler Champion Diver on Instagram I had not heard of the brand.  From what I was seeing in the photos there, I felt there was something worth checking out in person (that blue dial didn’t hurt, either).  I reached out to the brand, and even though the watch is actually sold out (more on that later) I was able to spend some time with the watch. The first thing that struck me on the Ocean Crawler Champion Diver – and likely will for most folks – is the size.  Now, sure, a 44mm case (15mm thick) is not out of the realm of the ordinary for independent dive watches.  Perhaps it’s just my own movement away from reviewing them as much (not a conscious decision, it just worked out that way), the size becomes a bit more of a shock to the wrist, I guess.  Then again, when you get into those bigger cases, you can do other things. For starters, the Ocean Crawler Champion Diver carries a 300m WR rating.  While 100m will be reasonable for most folks, the extra couple hundred meters nets you a bit more peace of mind.  Next up is the shock resistance rating, which in this case is 6000G.  Prior to this, the highest rating I’ve seen on a watch that I’ve reviewed has been 5000G (most of theBallwatches carry this level of protection).  Some of this, no doubt, comes from the steel.  More importantly, though, is the movement the steel is surrounding. For the Ocean Crawler Champion Diver, they’ve used a modified Seiko 4R36b movement to help net that protection from bumps, bangs, and drops.  While I’m not movement expert (that would be Victor, for those keeping score at home), this level of protection along with an accuracy of +/- 5 seconds per day (in three positions), well, that just seems like a good movement to have on the wrist.  And it’s not like Seiko is unknown for competent, reliable tick-tocks. Let’s move on to the aesthetics of the Ocean Crawler Champion Diver.  As I suspected from the photos, I did really dig the deep blue dial the watch has.  Stacked on top of that you’ve you the internal counter bezel, something we’d be more used to seeing on a dual-crown watch.  Here, the ring is locked in place.  What isn’t locked in place is that coin-edge bezel.  That’s actually a 120-click uni-directional bezel, along with the lume pip (which you’d then align to the minutes on the chapter ring).  This mixes things up a bit, and I think the bezel design works well for us desk diver types. Under the thick domed sapphire crystal of the Ocean Crawler Champion Diver, you’ve got some thickly applied lume, with numerals and indices that stand out nicely against the dark dial.  The hands are also lumed, of course, and they contain another design surprise.  When you first look at them, they look almost like arrows, or perhaps stacked triangles.  This is just a matter of how the hands are painted.  Nearer to the pinion, they’re outlined in black, and then they transition to another color – white on the hour hand, and the oh-so-dive-watch orange on the minute hand.  It’s an interesting look, and one I’m surprised I’ve not seen more of in the past. Now, when I started talking about the Ocean Crawler Champion Diver, I mentioned that the $999 watch is sold out.  That’s true, at least direct from the brand.  They do have a partner on Amazon that has some in stock for $949.  However, lucky reader that you are, you can use the coupon code OCEAN201 (which is valid until October 28) to drop that price down to $711.  If you want to pick one up, and miss out on that remaining stock, just be patient.  We’ve gotten word that the brand will be introducing three new dial designs in this case at the end of October. And with that, we’ll wrap things up with our review of the Ocean Crawler Champion Diver.  It has a design that mixes things up a bit will still retaining classic dive watch cues, and brings a movement into the mix we do not commonly see from independent brands.  It is a big watch, so it may overpower smaller wrists, but on either the included rubber or leather straps, it will be a bold everyday sort of a companion.  oceancrawler.com