Eone Bradley: A Tactile Timepiece For Everyone 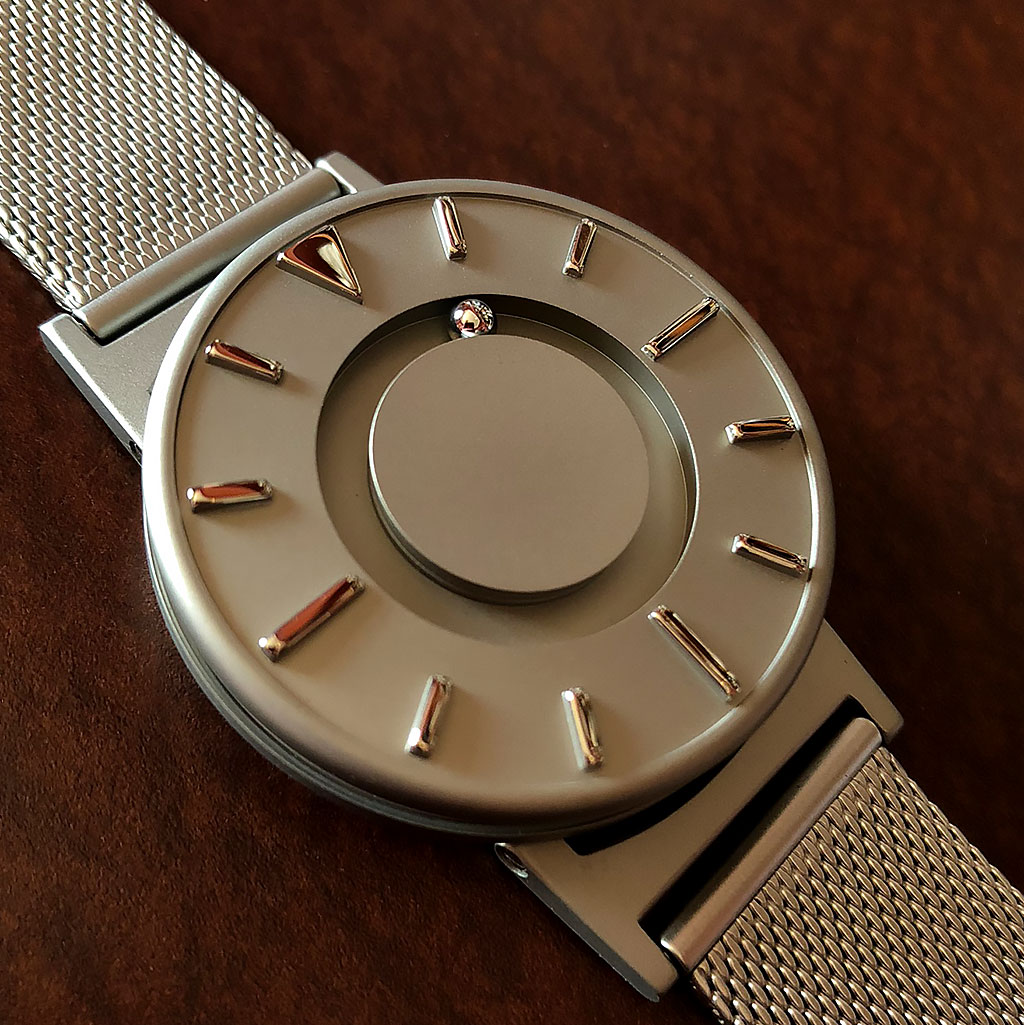 When I first saw the Eone Bradley tactile timepiece, my first thought was that I was looking at an Art Deco sculpture you could wear on your wrist. I immediately wanted to know how it worked, who it was for, what it was made of and what was the story behind it. To answer those questions and more for us, the now-5-year-old startup sent me its latest Eone (pronounced “E-One”) Bradley Silver Mesh watch, and it’s been a learning experience for me in more ways than one.

The Eone Bradley tactile timepiece lets you feel the time with your fingers. It was offered and successfully funded as a Kickstarter project in 2013. It was named in honor of U.S. Navy lieutenant Bradley Snyder, a veteran of the Afghanistan war who was severely injured while diffusing a bomb, losing his sight. That didn’t stop this guy, though. In 2012 and 2016, he won a total of five gold and two silver medals in the Paralympic Games and broke a world record. Eone honors Lieutenant Bradley’s perseverance in speaking out for those who are blind, emphasizing that the stigma of blindness in our society is often more difficult to overcome than the disability itself.

How Does the Eone Bradley Work?

The Eone Bradley watch indicates the time with two small magnetized ball bearings, each rotating in its own concentric track. They can’t fall out of those grooves and magnetically latch onto the point designating the current time. The inside ball on the watch face shows minutes and the ball that rotates around the perimeter of the bezel displays hours.

As a sighted person, it’s fascinating for me to close my eyes and try to detect the position of each of these ball bearings, realizing that my sense of touch is nowhere near as developed as it could be. Sometimes the ball bearings lose their grip to the underlying magnets, but a quick flick of the wrist rolls them back into the proper position. It felt awkward at first. However, within my first week with the watch, I got better at it. I also learned a lot about tactile sensation, as well as about myself and how much I depend on sight at the expense of touch.

Who Is the Eone Bradley Watch For?

It’s for anyone. For sighted people, the watch can serve you well. It’s not easy, though. After a short period of adaptation, you’ll be able to visually spot where both of the ball bearings are positioned at a glance. But a drawback is that there are a limited number of angles where you can plainly see the hour ball, embedded out there on the bezel’s rim. But I was surprised at how adaptable I was at determining the exact positions of the small ball bearings by using my fingers.

For those who can’t see, the Eone Bradley timepiece is a godsend. It must be a persistent frustration to always need to ask someone what time it is while going about your daily life. Sure, there are talking watches (there are dozens of them available at Walmart) and don’t forget the Apple Watch, which can get as talky as you’d ever want. There are other tactile timepieces available as well, but the ability to help yourself to such ordinary information as the time of day while wearing a stylish watch like this is bound to be an uplifting experience.

For those of us who are sighted, the Bradley’s unique characteristics come in handy as well. For instance, when you’re in a meeting and it’s running way too long, it’s a little tricky to check the time with a conventional wristwatch. With the Eone Bradley on your wrist, all you have to do is surreptitiously feel the position of these two little ball bearings while they’re safely out of the sight of your overly talkative colleagues. No one will be the wiser that you’re checking your watch. It’s a subterfuge that we’ve all tried to accomplish in plain sight, but you’ll be able to easily get away with it while wearing this burnished bauble.

What Is It Made Of?

Underneath its buffed and semi-sparkly titanium exterior with its highly-polished raised titanium markers is a Swiss Ronda quartz movement that keeps that movement type’s typically dead-on accurate time. It’s quite a tactile experience all around, with its sleek titanium body and face that feel so silky smooth to the touch. With some practice, it gets easier to feel the different shapes of its raised, elongated three, six and nine markers and triangular twelve marker, which contrast well with the shortness of all the others.

For it to be able to accommodate this pair of tracks inside which the balls rotate, the watch needs to be noticeably thicker than most timepieces we review here on Wrist Watch Review. Notice in my photos that this is quite the tallboy, measuring 11.5mm thick. But after that initial adaptation period, I noticed that the watch still fits underneath my sleeve and slides out easily whenever I need to check the time. Nevertheless, I see that thickness and the awkward closure of its stainless steel mesh bracelet as drawbacks. Both take some getting used to along with those tactile functions and the location of that hour hand, which is not always readily visible from the front.

What Do I Think?

This is a unique timepiece. At $285, it’s reasonably priced, and sometimes it even goes on sale. I must applaud its makers for their empathy, thoughtfulness, and inclusiveness of those who are not able to see. Beyond that, for the sighted, this is an eye-catching wristwatch. When I wore it to a party last weekend, it was quite an attention-getter, receiving lots of compliments. As soon as people found out the watch’s purpose and story, they all wanted to try telling time with it with their eyes closed. It was a learning experience for all, and quite the conversation piece. I think it’s well-constructed, accurate, original, and eminently useful, whether you’re blind or not. If you’re a person who happens to be blind, it could serve as a life-changing tool.