Flying along with the Tutima M2 Pioneer Chronograph 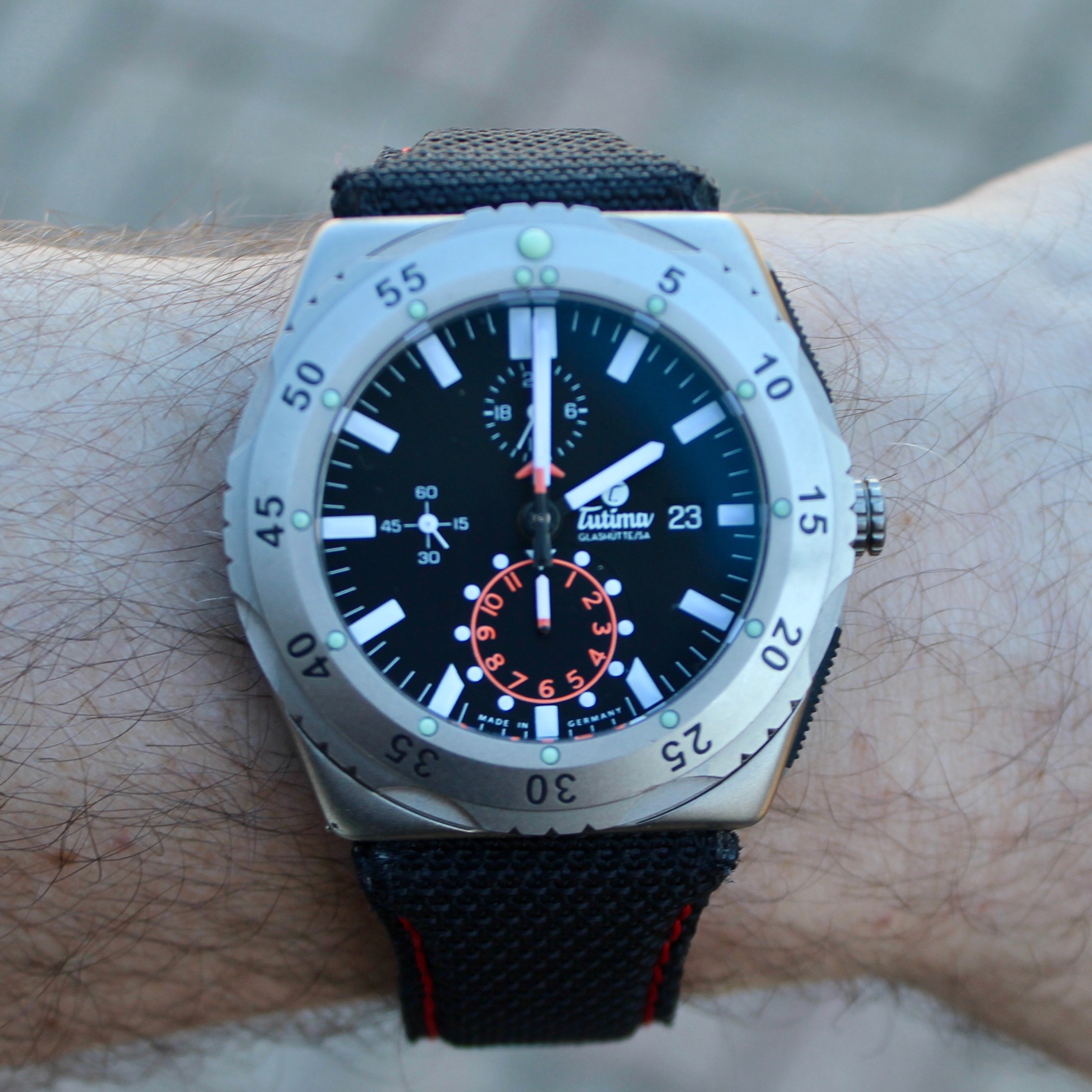 While I?ve had the pleasure of reviewing a number of watches from German brands, Tutima is one that has not really graced my wrist. Fittingly, then, as I was in the midst of a few different chronograph reviews, I was contacted about a loan of the Tutima M2 Pioneer Chronograph. Suffice to say, we brought it in and spent some time with it, and have our thoughts on it for you now.

Now, as I?ve said before – and I?ll no doubt say again – while I understand and appreciate (in the academic sense) chronographs, they?re not a complication that I have a lot of use for in my day-to-day. That said, what really struck me about the Tutima M2 Pioneer Chronograph is how it looks nothing like what we expect a chronograph to look like. First up, the dial. All of the normal subdials that we tend to expect, they look like they?re not there. I mean, yes, they sort of are – there?s a 24-hour display up at 12 o?clock, and the running seconds at 9 o?clock. But those are subdued, and they eye really only catches the one down at 6 with it?s bright orange circle.

This anti-chronograph look is further cemented by how the Tutima M2 Pioneer Chronograph has done up its pushers. First off, they barely protrude from the side of the case, giving it a clean look from the top. When viewed from the side, you can see neoprene inlay on them, which gives it more the look of some bumpers or something. In other words, this is a chronograph that hides it?s capability in plain sight, while not actually reducing the usability of the function.

You see, those buttons are big, and that?s helpful as this watch has it?s roots in the NATO Chrograph the brand developed for the German Army in 1984 (and still in use today) so you have a watch that can be manipulated with gloves on. When you engage the chronograph then things spring into motion. The first central hand starts moving, and you?re tracking the seconds. As it goes around, the second central hand kicks in, tracking the minutes. Finally, you?ve got that orange-ringed sundial, and that?s where the hours are recorded. Add in the fact that the bezel is bi-directional as well (and has the lume pips that echo those around the 12-hour subdial) and you?ve got some flexibility in how and what you?re tracking.

All of this does add up needing to be a larger watch (as most pilot watches are). Here, the Tutima M2 Pioneer Chronograph comes in at a hefty 46.5mm in diameter, and an equally healthy 16mm thickness. Fortunately, once it?s on the wrist, you don?t feel all of that, because the case is made out of titanium. It still makes for a 124g package on the stock kevlar strap (which has a titanium clasp), which isn?t necessarily light, but it?s worlds lighter than anything you?d see if this were in steel.

All that space in the case of the Tutima M2 Pioneer Chronograph means they were able to put some soft iron in there, to help protect the movement (their Caliber 521 automatic) from magnetic fields, so you?ve got that going for it. There?s no getting around it, though – this is an overly large watch, one that is blocky and robust. Then again, plenty of folks spring for dive watches in this size (this is not a diver with a 30m WR rating), so it?s a matter of what it is you?re looking for in a watch.

While I enjoyed my time with the Tutima M2 Pioneer Chronograph (strictly casual and office wear), and appreciate how it doesn?t necessarily look like a chronograph, it?s ultimately just too large of a piece for me to consider it comfortable for daily wear. Add in the fact that the chronograph complication adds complexity to maintenance (for something I wouldn?t regularly use), and this one would end up being a pass for me. That?s just me, though. If you?re looking for a chronograph with solid aviation roots – and doesn?t look like what you?ve seen before – this titanium titan can be yours for $6,100. tutima.com