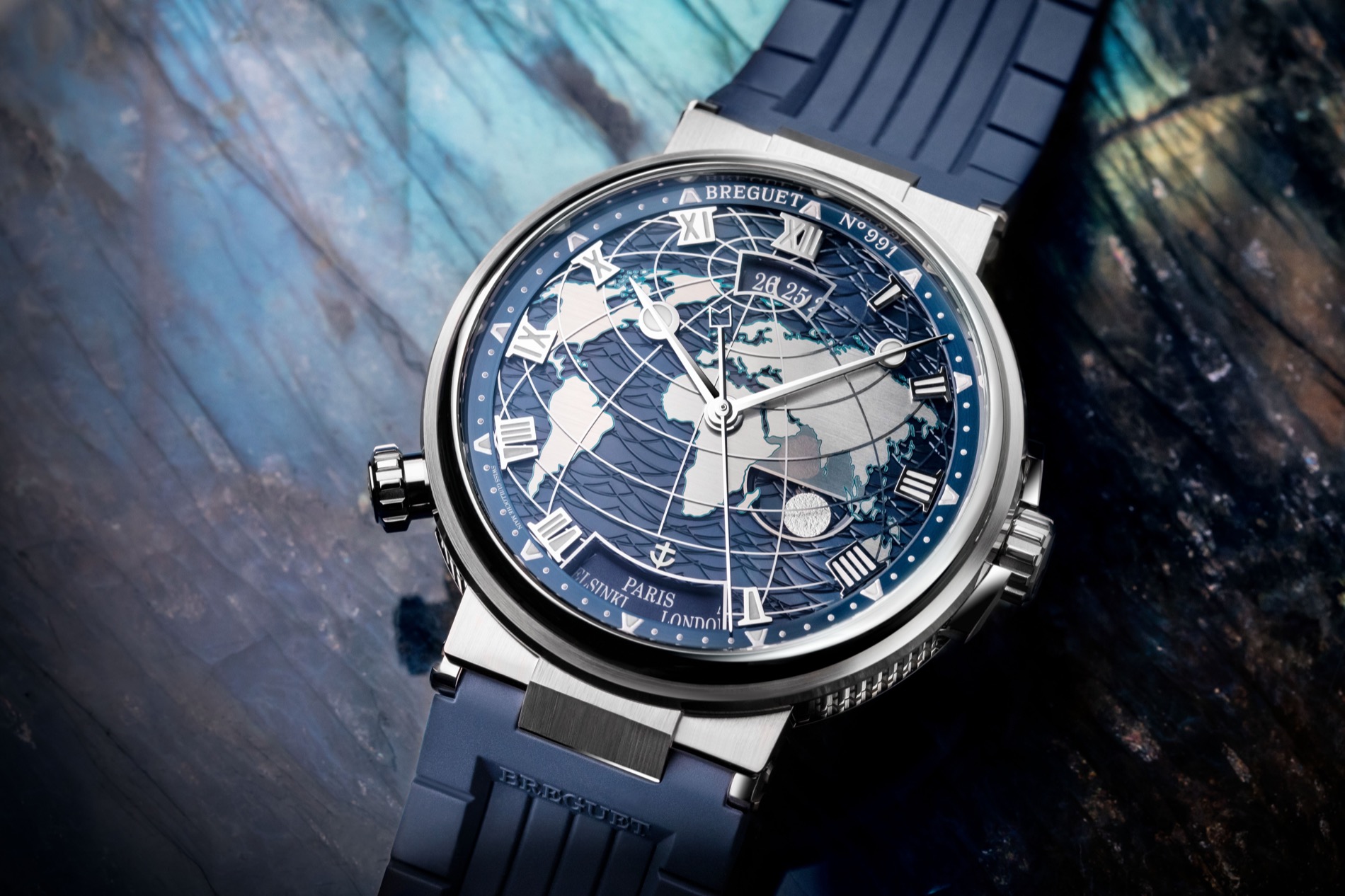 Those who know me – and my proclivity for watches – also know that I tend to favor watches with a GMT complication. Whether it’s for travel or tracking server times in UTC, I find them handy. Worldtimers, not quite as much, though. What if you had a watch that looks like a worldtimer, but acts much more like a GMT, even without a visible fourth hand? That’s what you get with the Breguet Marine Hora Mundi.

Breguet has always been known for high-end, sophisticated wristwatches, the sort of pieces that didn’t stray far from what the eponymous creator first made centuries ago. Still, that can start to feel a bit too staid, so the Marine line came in in 2019, giving us something that was a bit less formal, and leaned (at least a little bit) towards a sportwatch sensibility. I’m not saying you would go rock climbing with one, it’s just that… Let’s put it another way. If traditional Breguet was showing up in black tie formal wear, the Marine ditched the bowtie and undid the top button. With the Breguet Marine Hora Mundi, you’ve thrown on a blazer (to extend the analogy) and are ready to go travel the world and the seven seas.

Now, Breguet sensibilities are still in full force here. The case is made of gold, Roman numerals adorn the dial, and even the classic Breguet handset appears. Though, here, we see changes. The pommes on the hands are filled, as are the numerals – we’ve confirmed that both are luminous. Reminding us that the Breguet Marine Hora Mundi is meant for world travel, you’ve got a globe prominently printed on the dial. So, how is it that this three-hander can track a second timezone?

That answer lies in the pusher on the left side of the case, as well as the world city window at the 6 o’clock position. Whatever city is shown there, that is the time that is displayed on the watch. Also note that the day/night indicator – right off of the Horn of Africa – is locked to that city as well. When you press the pusher on the left side of the case, the city changes to the second one you’ve selected to track. Not only that, the handset moves to show the time there, and the day/night indicator changes as well. Another press of the button, and you’re back to the original view of the world and its time.

For you to get a sense of how this function works, you really should see it in action, as it’s quite startling how quickly the time changes. And it’s not just the time – the city indication changes, and the day/night indication also moves forward or backwards. For that, check out this video (which goes through the whole watch) from WorldTempus; we’ve got it starting at the point where it shows the pusher in action:

This is a supremely clever approach to dual time zones, and I like what Breguet has done here. All of this is made possible by their 77F1 caliber, which runs at 4 Hz and can net you a 55 hour power reserve – so no worries if you’re just lounging by the poolside after a day of travel. There’s also a date display tracked by the movement (shown up at 12 o’clock), and a few other niceties in the movement (see the specs below). Of course, that’s not to exclude the mechanical bits that allow that almost instantaneous change of time.

You already know that, since this is part of our “For your consideration” series, this is a watch that is entirely aspirational and firmly in the realm of luxury goods. So, on to the pricing. On the leather or rubber strap, it goes for $72,700. Want to upgrade to the bracelet? That takes you to $95,200. I know I always say go for the bracelet, but that is quite a steep 30% jump. Then again, if you’re shopping in this bracket, it’s probably not a concern. While you can check it out online, you’ll most likely need to head to your local shop to actually pick one up. breguet.com

For Your Consideration: Breguet Classique 7337