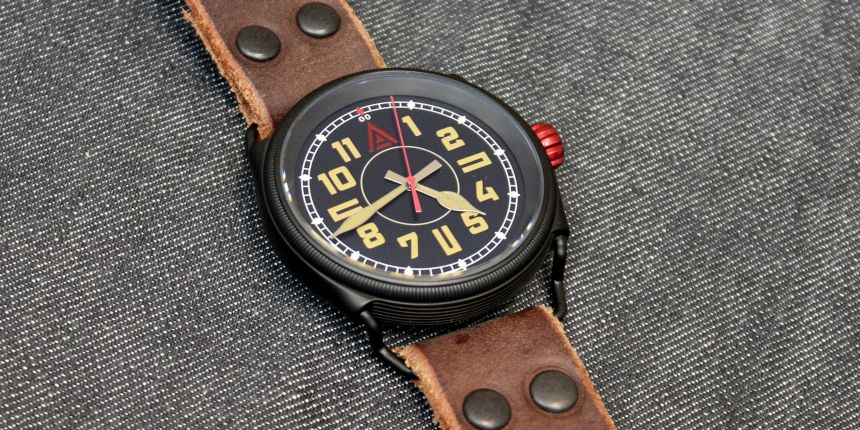 Today, we are going to walk through the most recent creation from British brand WT Author. This young company has an ambitious goal, to create models that represent periods across 130 years of watchmaking. Their first was the 1905, which we talked about here. The second one, the WT Author 1914, see us leap forward nine years, and that of course brings some changes to the design. It is also worth noting that, as they build up this watch collection, they are writing a sort of historical fiction in the paperwork that comes with the watch. I won’t spoil it for any future owners, but the 1914 has the story centering around Archduke Ferdinand (and that’s all I’ll say about that). This means by the end of the run, they intend to have a 13-chapter book following the fictional WT Author, as well as a 13-song album available. An ambitious goal, but it does add an extra creative touch to the whole process that you really do not see these days. There’s also a lot of physical touch to these watches being made. For example, the screen printing that appears on the packaging? That was all done by hand. Also done by hand are the buffalo leather straps that are riveted in to place on the watch (more on that a bit). For the creation of these straps, they actually had tools specifically made up so they could create the straps in-house. In other words, WT Author is trying to put as much of themselves into these watches as they can, and I think it shows in the end product. That end product, that is what we are here about, right? The WT Author 1914 is an intriguing watch. As I noted in the earlier overview, it really seems aimed at someone who likes the trench watch look, but wants to go for something a bit more modern. I will admit, I have been tempted by those older watches and the stories they carry, and the WT Author 1914 scratches that itch – and also manages to bring along modern reliability. When I opened up the packaging, I was first struck by the dial. Our sample came in the blue color, which is really quite dark. With this color choice, you get the aged yellow numerals and filled handset. Looking at these, I fully expected them to be lumed, given how raised the numerals appeared. Alas, that is certainly not the case. So, I asked the brand why this was the case. In short, it boils down to appearances. While luminous materials certainly existed in 1914, they felt that customers might perceive it as a more modern creation, and feel it would be out of place in a watch set in that era. On the one hand, I do admire the dedication to preserving that look and feel. On the flip side, I do really wish that the WT Author 1914 had some lume to it (just not radium, of course!).

Lume aside, the dial really is quite nice. The numerals are quite large and make a sort of inner “hours” track, and then you of course have the railroad tracks around the outer edge to mark out the hours. The handset (which has a writing implement feel to them, sort of like we saw on the Visitor Watch Co Duneshore) reaches out to those tracks without issue, which means to my eye that they are appropriately sized to the dial, as well as each other. The dial design is also reminiscent, at least to me, of a scope sight. You have the central circle with the lines (well, in this case, narrow U-shapes) radiating out in the cardinal directions, with the WT Author logo taking up the position up at 12 o’clock. This does a few things. First off, it establishes a subtle military connection (which of course a trench watch would have). It also allows for that branding to appear on the dial without it being overt, which is not what you would have seen in watches of the day – no walls of text or anything like that. With it’s wire lugs, the 46mm case also speaks of an bygone era. As does that case size, I suppose, given that it was pocket watches being converted. Normally, I would dismiss a watch at 46mm as being simply too big for my wrist. Here, however, the wire lugs make it seem much smaller than it actually is, somewhere more in the 42-44mm range, actually. The case itself is only 10mm high, so it slips easily under a shirt cuff. And, while the side of the case is not quite as wildly styled as the 1905 was, it is still replete with grooves, which links it to the earlier model. The caseback also calls to mind the 1905, as the presence of the “poker chip” assures. This was a styling decision WT Author went with on the 1905, sort of symbolizing their commitment to go “all in”. As it was successful, it sounds like this design cue will be continued forward on the casebacks of future watches, as it is here on the WT Author 1914. Also showing up again? The red crown, which here echoes the red used for the applied brand logo on the dial.

One of the biggest design elements of the WT Author 1914 is new to the model, though – the wire lugs location and the attached buffalo leather strap. First off, let’s talk about those wire lugs. While the 1905 had the lugs attached at the top and bottom of the case, on the 1914 they instead extended them to the sides. Also of note is that, just like they would have been in 1914, they are true wire lugs – continuous loops, if you will. In other words, there are no spring bars here. This was a nod to authenticity, as well as making the lugs something that was truly necessary to hold the strap in place. In their words, if they had gone with spring bars, it would have made the lugs feel purely ornamental. This means that the strap (which is quite comfortable) has to be riveted in to place. For those who love to change straps out, this may come as a disappointment. Again, this was a conscious decision by the brand. For one, the riveting is period correct. Second, even if you did remove the strap, about the only option you would then have would be a NATO, which would look out of place. Again, the whole goal with this watch was to call to mind the specific watchmaking era of 1914. Good thing for us that these handmade straps are quite nice.

Out of the box, the leather is quite pliable, and the (mostly) unfinished back of the strap feels comfortable against the skin. To add some variety, the leather keepers are reversed, and the buckle is a squared-off design I do not recall having seen before. It is worth noting that when I first got the watch in, the strap was rather squeaky in the lugs. This is something that I am more critical of on watches, so I again had a conversation with the brand. After some assurances that this was normal, and that letting the strap “bed in” would address it, I continued on. Wouldn’t you know it, they were right. Like any good piece of leather, time and wear allowed it to break in a bit and get settled in on the lugs and buckle. While I can still cause some squeaks if I move the case around (more than it normally would in regular wear) manually, in regular daily wear it is as quiet as any other strap. Which is a good thing, considering you will not be changing the strap out. I will say, if you have small wrists, the strap (along with the case size) may preclude you from having this fit well. On my 7.25″ wrist, I had it at the second from smallest notch – so I am guessing any wrist under 7″ may have problems with this one. Wearing the 100g WT Author 1914 around was a simple affair, and I feel that it works well as a casual, every-day sort of a watch (the Ronda movement and sapphire crystal help in that regard as well). Overall, the watch gives you a presentation that is rather unlike anything else you already have (that is, unless you already have some vintage trench watches kicking around). At an asking price of $564 (£350.00), you are getting unique styling, as well as a representation of an era of watches that does not often get much consideration these days. As far as “old school” homages go, this is an excellent example in my estimation, and it certainly makes me curious about the next edition that they will be producing.  wtauthor.com