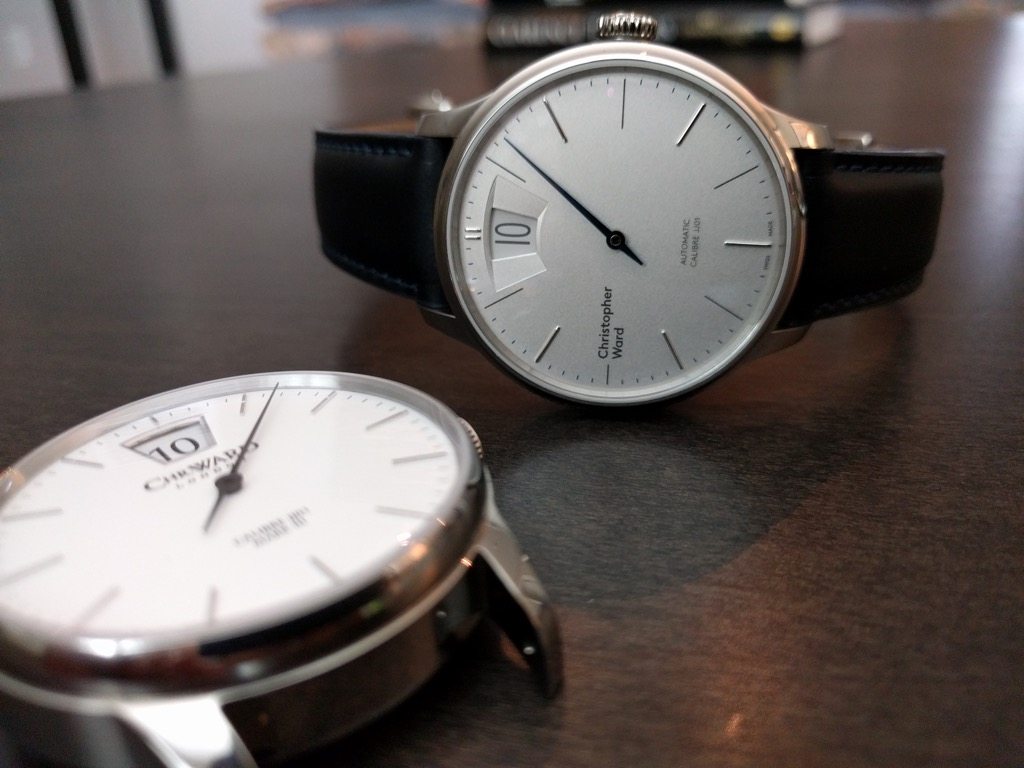 Like a subtle sonnerie, the jumping hour complication audibly announces each hour. Instead of chiming like a grand sonnerie—and costing tens of thousands of dollars—a jumping hour clicks at the top of the hour as a digital hour wheel “jumps” to the next hour. Not unlike the sound of a date wheel snapping into a new day, the jumping hour’s click is easy to pick up in a moderately quiet environment. It’s a pleasant reminder that “you’ve just squandered another perfectly good hour,” as the Tappet Brothers used to say. And, as I’ve alluded to, a jumping hour needn’t cost an arm and a leg—especially if you pick up one of these pair from Christopher Ward. 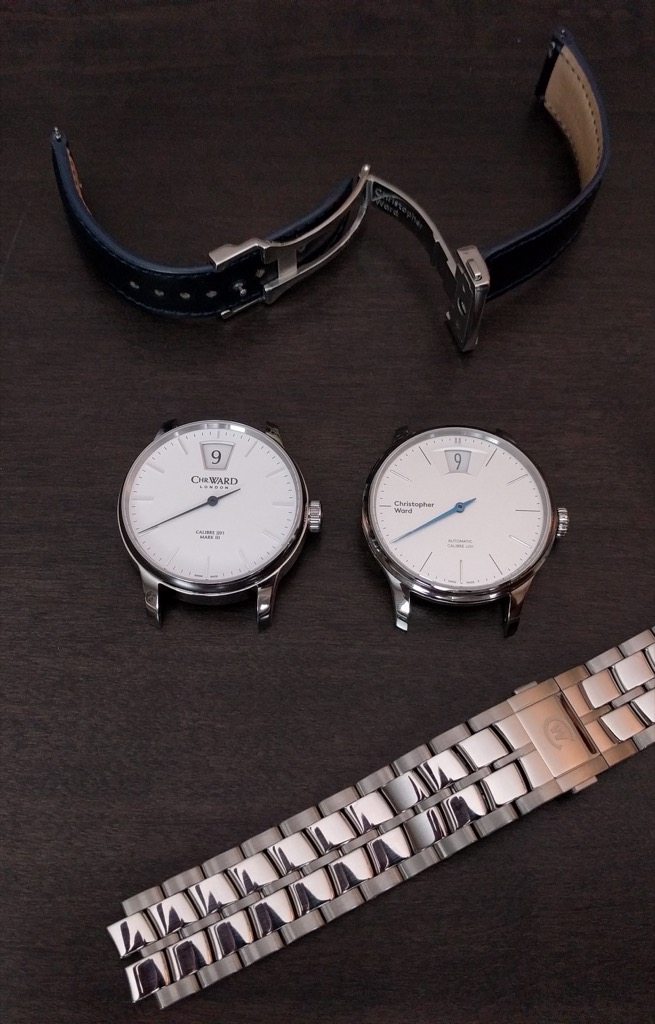 I bought a C9 Jumping Hour MKIII (shown on the left, above) as they were clearing out the old stock to make way for the new C1 Grand Malvern Jumping Hour, so this review will be a head-to-head look at my old C9 vs. the new C1. In nearly every respect, the new watch is better—more usable, more wearable, and more stylish. 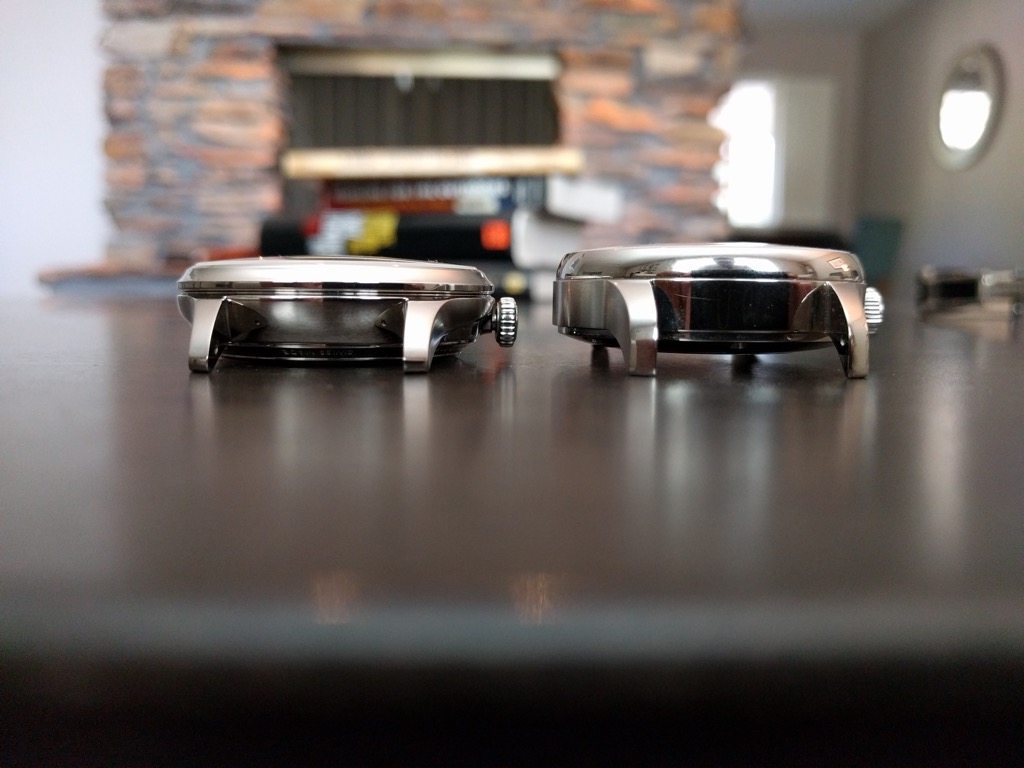 Height is a real issue with the C9. The problem comes from the modified Sellita SW 200-1/ETA 2824 movement at the heart of both these watches. The SW 200-1 is 4.6mm high, and the Johannes Jahnke-designed JJ01 jumping hour module adds 2.5mm. That leads to a beefy case. The C1’s 12.65mm case trims 0.65mm off the C9’s 13.3mm girth, which makes a difference when trying to slide that bulk under a shirt sleeve. More noticeable, though, are the svelte lines of the C1 case. From the bezel on down, every surface is sliced and diced to turn the slab-sided C9 into a modern machine—and a lighter one by 9 grams. The case looks exactly like the C1 Grand Malvern Power Reserve and measures the same. Although here, the dial sits higher on the rehaut to make room for the thicker movement. The result is still a tall watch, but it looks and feels much thinner than its older brother. 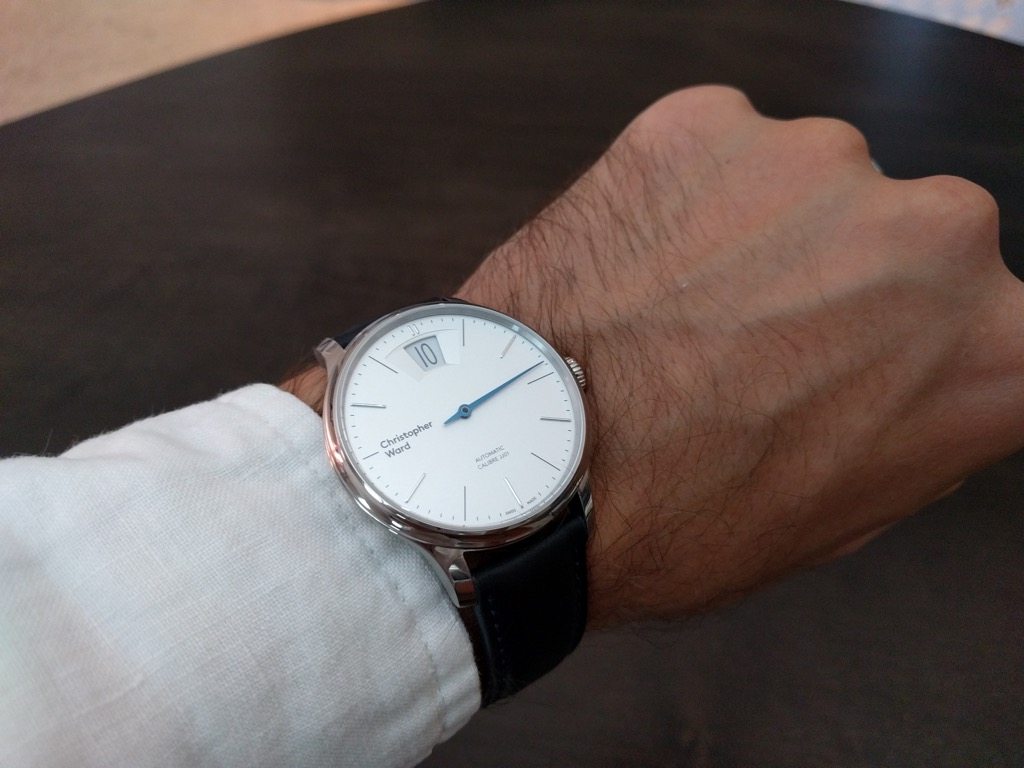 The dial, too, is on a visual diet. Like the C1 Grand Malvern Power Reserve, the new indices are alternatively applied and printed; the C9’s are all applied. I suppose that is a downgrade, but it gives the dial a more modern appearance. The hour window at 12:00 is dished in the new style we saw on the date windows of the C3 Malvern Chronograph MK III and the C5 Malvern Automatic MK III, also a “downgrade” from the larger chrome-trimed C9 hour window but, again, this is an aesthetic improvement. The smaller hour window flanked by depressions on either side looks grounded and symmetrical. The C9 hour window looks larger and dominates the face. 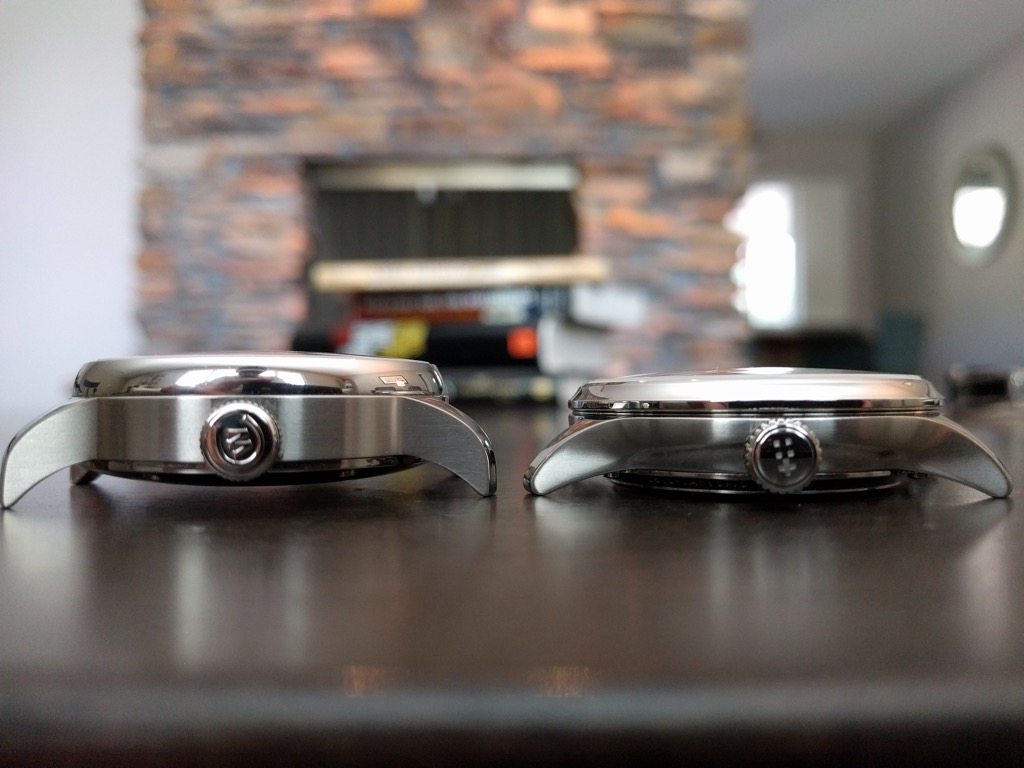 The crown on the C1 is a marked improvement in both proportionality and usability. It’s thinner, but the knurling is better, making the C9’s chubby tough-to-grasp crown all the more frustrating. Especially in a watch like this, that I don’t wear every day, a good crown is key. 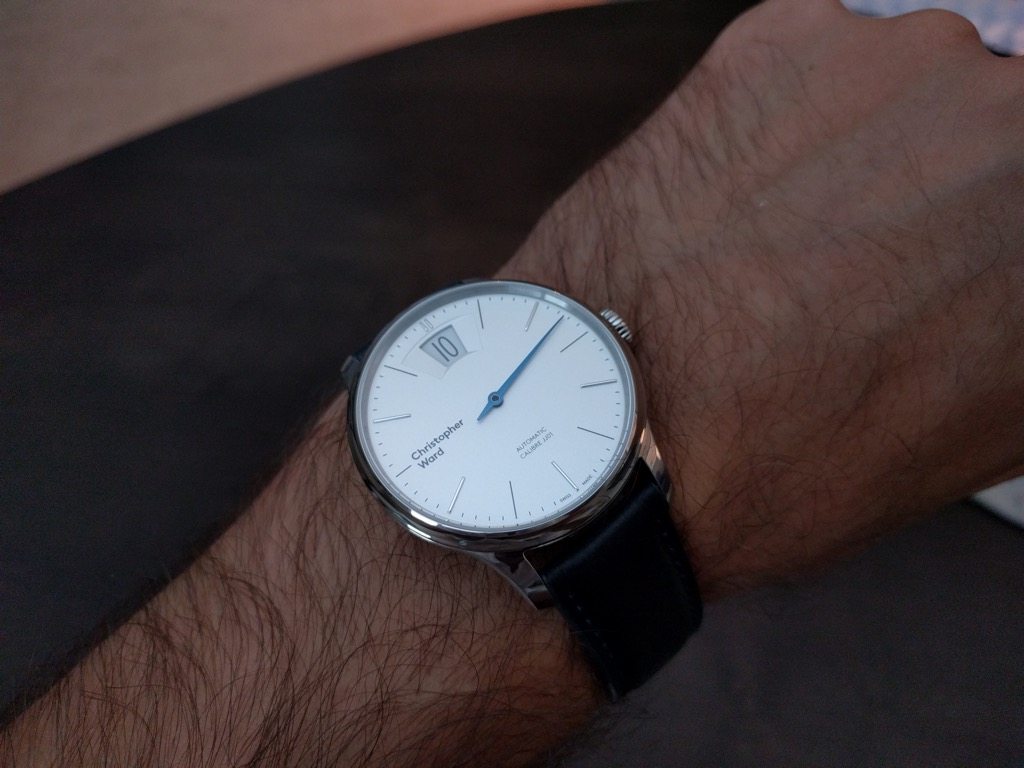 The only negative I see about the C1 is the minute hand. Seemingly borrowed directly from the C1 Grand Malvern Power Reserve, it comes up a little short here. The C9’s hand is a dramatic pinpoint with a long counter weight—the whole thing streaks across the dial with a rakish assertiveness that reminds me of those old Laurence Fishburne Tanqueray ads. The C1’s hand is shorter on both ends. It just barely overlaps the minute track and appears stubby without the longer counter balance of the C9. The bluing is beautfiul and gives the watch some personality, but I wish the whole thing was just a bit longer. 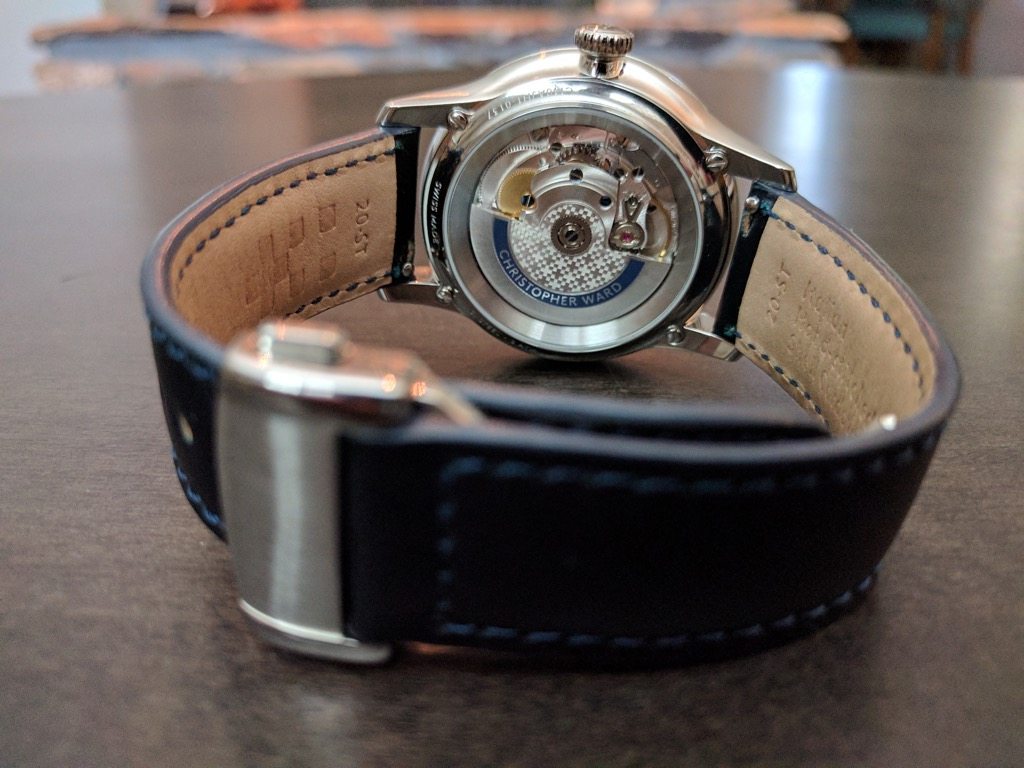 Despite that flaw, the C1 is the clear winner in this prize fight, but the minute hand makes it a TKO, rather than an old fashion flattening. The C1 case wins a lot of the victory, but the modern facelift of the dial helps, too. And the excellent Bader deployant is a welcome bonus. The blue Cordovan version on my tester was nearly black, but blue enough to give it a bit of punch. At $1,595, this is among the least expensive jumping hour watches available and a big improvement over its predecessor. I wonder if CW has a trade-in program? christopherward.com 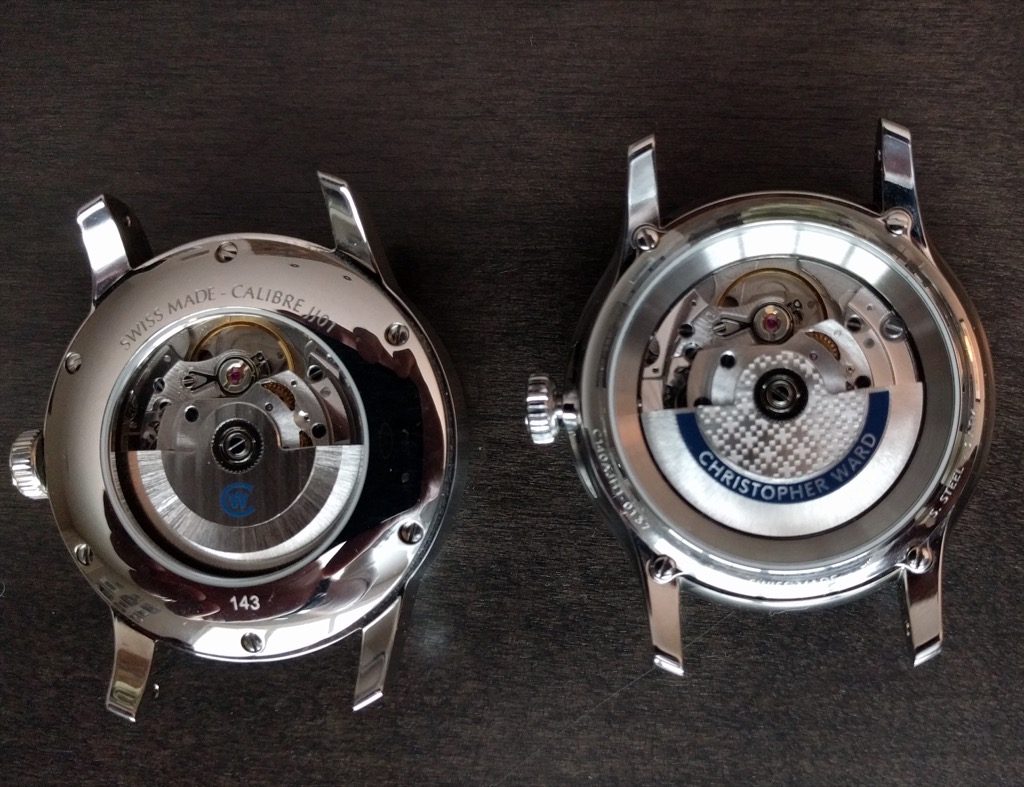