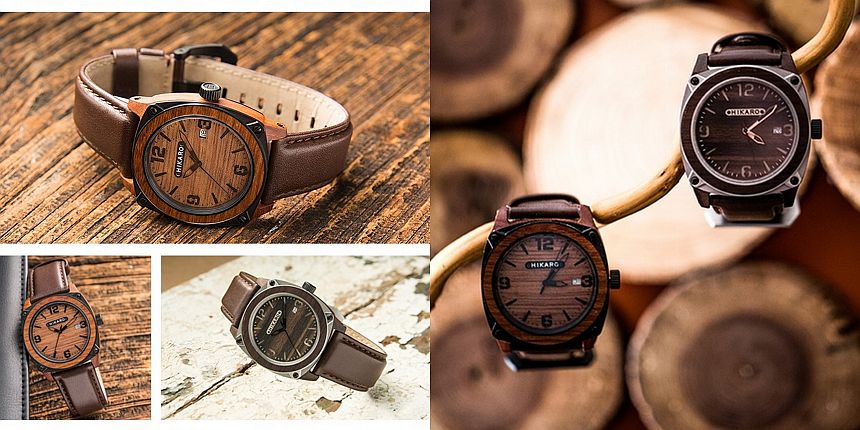 We have curtailed our coverage of Kickstarter watches, as too many of them have suffered from a case cookie cutter-itis, and frankly, did not look all that different from each other. Prior to that self-imposed restraint, we also stopped covering wood case watches, as there simply was not enough interesting about what we were seeing, as compared to what came before them. Managing to get past our defenses on both counts, we have the Hikaro Watch, currently funding on Kickstarter. I’m going to skip past all the background on the brand (which you can read for yourself on the project page), as it is not all that different than the stories we have heard before. Instead, I want to focus directly on the Hikaro itself. The 42mm case is indeed made of wood, but it evokes the cushion case style which I have known to be fond of. Unlike many other cushion case watches (which have been of steel), the Hikaro is rather thin – only 8.5mm. As you might guess, that means that it’s quartz inside (a Ronda 715), but that’s ok by me. Watches like the Hikaro are really more about the style of the thing, than some long-lasting heirloom you’re passing on to the next generation. Not to say that I think the Hikaro looks to be cheaply made. I have not seen them in person, the prototypes they’ve photographed look well-sorted. Add in the fact that there is a steel bezel on top – as well as a sapphire crystal – and you have a watch that should stand up to being knocked around a bit (if it comes to that). Regardless of the color of the metal bezel, it does look like the wood tone / finish is consistent across the case and the dial, which itself is a sandwich construction (unfortunately, it does not look to be lumed, as it’s not called out in the specs, nor are the hands lumed). All in the all, the Hikaro watch is the first wooden watch that I have read about in a while that I felt merited bringing to your attention, dear reader. Will it be for everyone? No, it won’t be. But, with early bird tiers starting at $165 (for what is available as of the time of this writing), it is something that is an affordable and, dare I say, fun, diversion from the watches available out there. No, I do not think the Hikaro is going to be a long lived watch in anyone’s collection (just due to the nature of a wooden case), but while it is in the watch box, it could be a nice change of pace. You can check out the full project details here; funding closes out on April 20, with delivery anticipated for August 2016. hikarowatch.com