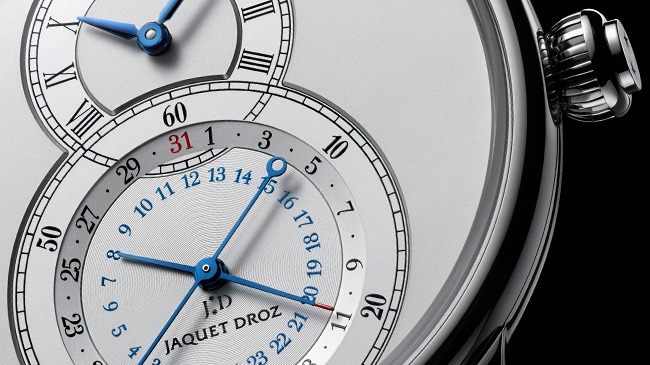 As a lover of Jaquet Droz I’m smitten by whatever the produce. A Tweeting Bird? I’m there. A watch with stars all over it? Hand it over. So I’m equally smitten with the Grande Seconde Dual Time.

This sweet piece has a large seconds dial with “reference time” at six o’clock below a central “local time” dial that is easily set via the crown.

Droz has some things to say about this whole thing:

?Remaining true to the aesthetic principles of the brand, the Jaquet Droz artisans conceived a classic, sophisticated display, starting with contrasting yet complementary indexes: Roman numerals on the upper counter and Arabic numerals on the lower. They also added a further complication – the date – indicated by a red-tipped hand that exploits and enhances the recessed lower subdial in a delicate structuring of form highly characteristic of Jaquet Droz. Such a choice is equally reflective of a desire to achieve improved readability. At Jaquet Droz, aesthetic concern always goes hand in hand with convenience and technical excellence. This is why the Grande Seconde Dual Time is fitted with a silicon escapement with unrivaled chronometric performance and unaffected by magnetic fields.

The company is connecting Pierre Jaquet-Droz’s unique position as the first watchmaker to trade with the Forbidden City with the watch, calling him the embodiment of “globalization before its day.” I’d also argue that because eight is a lucky number in Asia this watch might be aimed at some globe-trotting PCB magnates.

It’s a really beautiful piece – more attractive, I think, than the new Pateks with the writing on the dial and, thanks to the lucrative watch blogging profession, I’m sure one day I’ll own one before my death.

A boy can dream. 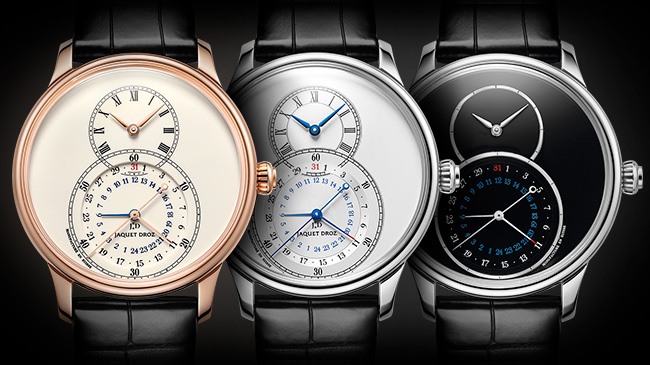