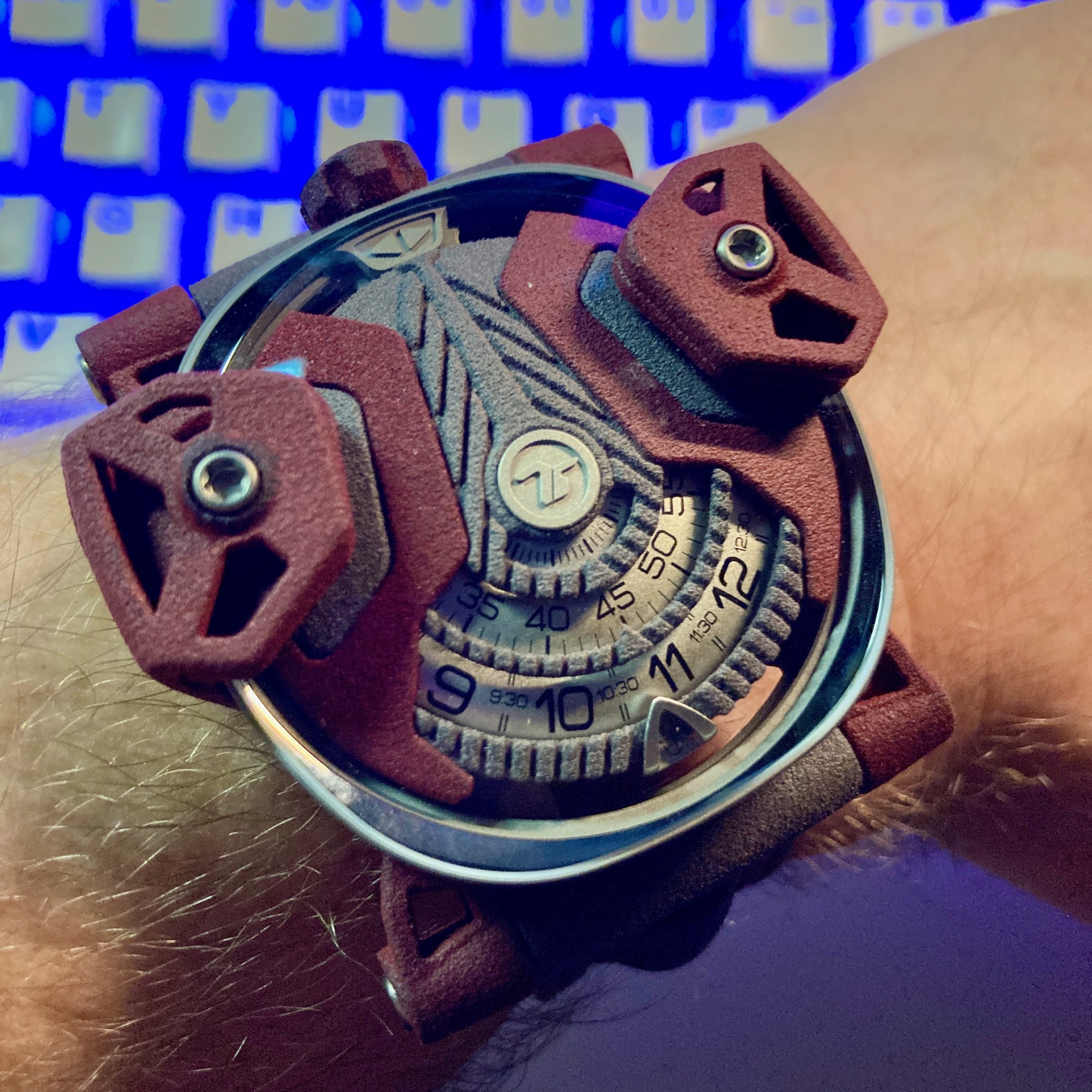 As we mentioned in our recent writeup, we were working on getting a loaner in of the SevenFriday Free-D 2 to get a better sense of this funky, 3D-printed creation. We’ve spent some time with it, and have some thoughts to share.

Now, first things first – the SevenFriday Free-D 2 is not going to be the watch for everyone. In fact, I’d say it’s not even going to be the watch for fans of SevenFriday, necessarily. This is a watch design that is definitely exploring some new territory, and it makes for a very unique look. While the squared main case and even circles for timekeeping (as we saw on, say, the Caipi) evoke the other SevenFriday designs, this is primarily it’s own thing.

While the central case is a bit more traditional (and made of titanium), that’s not what you notice first with the SevenFriday Free-D 2. No, that would be all of the extra red bits, which are made of a 3D-printed polyamide. Aside from being a stylistic exercise, they also form a cage around the titanium case. This is how things are held onto the strap, and they also provide some additional protection to the case itself. When you pair that with the stacked discs for the timetelling, this really does have the feel of something like an Urwerk or maybe even an MB&F.

On the wrist, the SevenFriday Free-D 2 definitely sits tall. Part of that is with the two bumps on the top, but it’s also the printed pieces on the reverse of the case that combine for that bulkiness. Still, between the cage, titanium case, and sapphire crystal, it should hold up to the bumps of life. It’s not a watch that will fit easily under a shirt cuff, but then again – if you’re wearing this watch, you’re going to want to be showing it off.

Telling the time with the SevenFriday Free-D 2is something that you’ll need to get used to as well. Not that timekeeping via discs is anything new. Rather, it’s just training your eye where to look, rather than interpreting a traditional handset. You’ve got a large triangle drawing your eye where to read the hour, and then you just go up from there to read the minutes and see the running seconds going. You’ll notice that the color and texture separating those discs is actually the same as the inserts on the strap, which is a nice bit of continuity.

At the end of the day, you need to decide for yourself if the SevenFriday Free-D 2 (or the other color variants) is the watch for you. While I was glad to see it in person, and applaud this sort of outside-the-box thinking, it’s ultimately not one I’d look to purchase and put on my wrist. It’s just a little too out there for my own personal tastes, but that’s just me. It’s definitely a very fun watch, and one that will catch the eye of anyone who sees it, no matter if they’re into watches or not. As we’ve mentioned before, the SevenFriday app is the only place you can buy the SevenFriday Free-D 2 for 4,500 CHF (approx. $4,700), one of 50 that are being made. sevenfriday.com