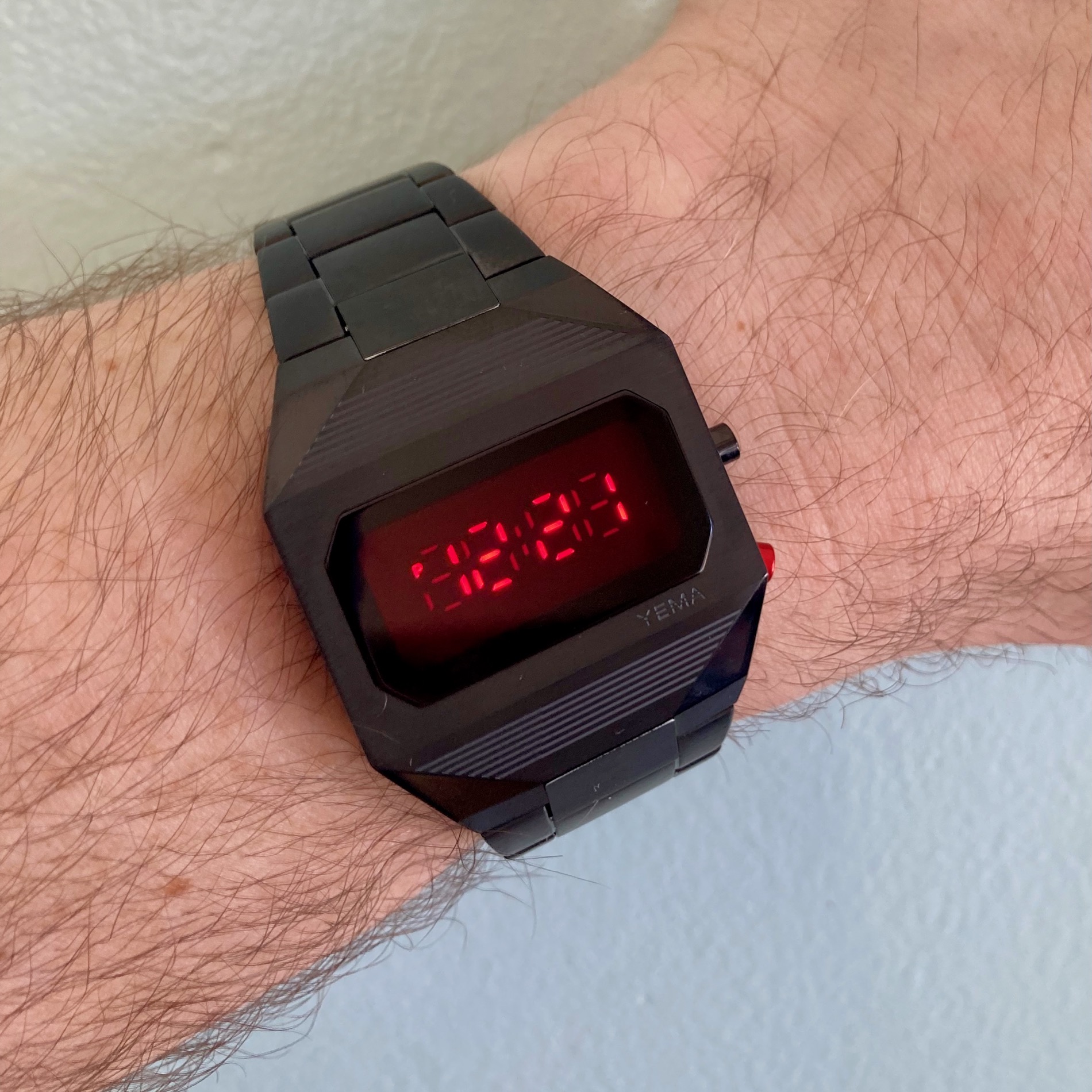 Earlier this month, we told you about the Yema LED Kavinsky, which was about to hit Kickstarter. Well, it’s out there now for backing, and we’ve been spending some time with a prototype. So, if you’re thinking about picking this watch up, read on to see what we thought of it.

As we’ve mentioned in the past, being able to check out prototypes is fun, and it’s a great way for us to tell you about watches that you can’t quite get yet – but arming you with the information you need to decide if you want to get it once it’s available. Here, of course, you’ve got just about a week (or less, depending when you read this) to get in and back the watch if you want to get one.

Going into watch like the Yema LED Kavinsky, you already have some expectations. Or to put it another way, you know what you’re going for – a push-button LED display that calls to mind the watches (and calculators, in my own history) of the 80s that lit up with this red glow.

As compared to the original Yema LED, this version is a lot more angular and refined. I rather like that they’ve moved to a lens/crystal that’s set into the case, rather than stretching all the way across. This feels like a more mature decision, and fits better with my memory of watches with displays of this nature.

Even with that, we’ve got all sorts of angles. The corners of the lens are clipped, you’ve got stepped angles going down from the case to the bracelet, and there are even more angles on the case itself. Think of it as a sort of very rough vector approach to the design. Though the bracelet tapers, it still fits into the overall look, and the signed Kavinsky clasp holds thing secure, and it’s not bulky at all under your wrist.

Wearing a watch like the Yema LED Kavinsky reminds you that checking the time can be a conscious thing. If you’re the sort who likes to sneak a glance at your wrist if the meeting is boring, well, this isn’t the watch for you. To get the time, you’ve got to press the pusher on the side of the case to get the display to light up. That’s mostly due to wanting to save battery life, but it’s also a nod to how these watches have worked all along, rather than wiring in a gyro sensor to kick it on automatically.

So, what’s that other red pusher for? That one is what you can use to set the watch, as well as cycle through the other pieces of time that the Yema LED Kavinsky is recording – the date and running seconds. Once you’ve got things set, the watch just does it’s thing, and there’s nothing else to mess about with.

If you’re looking for a relatively simple watch that carries those retro 80s / electronica vibes, it would be hard not to say you should have a look at the Yema LED Kavinsky, which offers a more straight-edge take to the design than we’re seeing from other brands producing watches like this these days.

As this is on crowd-funding, you’ve got limited time to back the Yema LED Kavinsky. This campaign closes out on March 31, 2022 – and yes, it’s way over-funded. For $216 you can back one of these, and have something that feels like a transformed K.I.T.T. (from Knight Rider) on your wrist. Check it out over at Kickstarter or Yema.