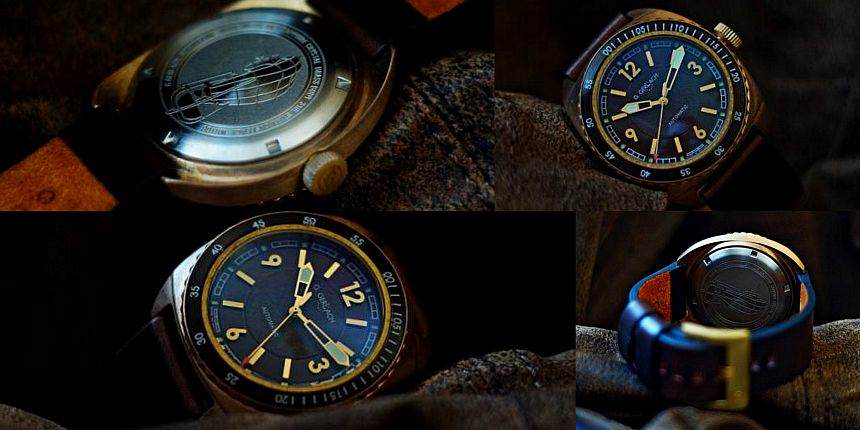 Now, if you are going to introduce a new watch, and want to ensure that people know it’s a diver, calling it a Submarine is certainly the way to go. That’s what we have here with the recently-announced G. Gerlach Submarine. As you recall, the brand has indeed released watches named for submarines before (such at the Otago). This more generic naming was done on purpose. Rather than honor a specific military vessel, the G. Gerlach Submarine instead is in honor of a scientist and inventor, Stefan Drzewiecki. Along with his aviation inventions, he was also behind the build up of the Russian submarine fleet, including the first sub that featured a periscope.

In keeping in theme with the era that Drzewiecki worked in, the brand has gone with a brass (yes, brass, not bronze) case for the G. Gerlach Submarine. In this implementation, I think it works rather well. There’s a brighter orange hue that you pick up around the bezel (which is surrounding a sapphire crystal) as well as the brighter, more yellow tone, of the applied indices and the handset. Once the 43mm case starts to pick up some oxidation, then you’ll have quite a mix of earthy tones which should make for a rather nice look. And this is coming from a guy who avoids yellow tones in watches at most all costs! Styling aside, the G. Gerlach Submarine should be a decent watch for taking for a swim. It only carries a 100m WR rating (so no deep dives), and is powered by the Seiko NH35A movement. This is not a movement that we see in a lot of watches, but it shows up now and again, and it’s not an unknown quantity at this point. All told, it’s a tidy package that you’re getting. And when you realize that the watch is only running at about $350 (depending on currency rates)? Well, it’s quite the bargain if you’re on the hunt for brass watch for the summer. Also, since it’s brass (rather than bronze) you should have an easy enough time keeping the case polished, should you want to do that. Just good luck with the crown – while it has a steel core, it has a brass outer, so it will pick up patina as well (and likely be a tough one to polish). Suffice to say, the G. Gerlach Submarine is another watch from the brand that I rather like. It may not be one that I myself might strap on, but I think there are a lot of things to like here (and we here rumors of more good things in the pipeline). Until we learn about whatever else they’re cooking up over there in Poland, sound off in the comments and let us know what you think of the G. Gerlach Submarine, and brass/bronze watches in general. gerlach.org.pl