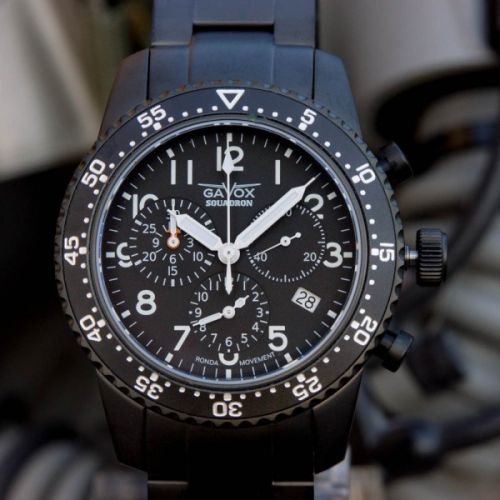 When it comes to military-inspired watches, we really don’t have a shortage of options. When it comes to watches that have actually been issued to a military force, and then made available to the general public, well, that’s a much smaller pool of companies. One of the latest to join those ranks is the Gavox Squadron. In 2013, the Belgian Air Force commissioned Gavox to create a chronograph that would meet the needs of their pilots. Some of those needs should be familiar to the users of chronographs – a 12 hour chrono register, 5-minute marking bezel, AR-coated sapphire crystals, and a WR rating of at least 100 meters. The one new wrinkle, from a pure spec perspective, would be the inclusion of a 12-hour alarm function. To meet all of this functionality, Gavox went with a Swiss-parts version of the Ronda 5130.D So, that takes care of the features and functions of the Squadron. What about the looks of the watch? They went back to the pilot chronographs of the 1950s for their inspiration, and have come up with a very crisp and legible look – matte black dial (so no reflections) with white numerals, indices, and hands. Of particular interest to me in this design is the handset. While I would’ve maybe adjusted the hour hand a bit (lengthen a tad, and widen it to differentiate from the minute hand), they are very visible against the dial, which would be of particular interest to anyone who’s looking to get the time at a glance. While the military-specific version of the watch has been produced in rather small numbers, the one that we have available to us has a wider (though still small) release of 500 pieces of each version. This edition is limited to two versions – either in a steel finish, or in an PVD all-black finish; this finish applies to what shows up on both the case and the included steel bracelet. Of note with that bracelet – each component of it had the PVD applied before it was built, so you’ve got great coverage. Should you want to cut the weight of the watch down a tad, the Gavox Squadron should be easily paired with any of the leather or textile straps that Gavox offers. You can pick yours up today at a price of $480 for stainless, or $520 for the PVD, directly from Time2Give.be. time2give.be