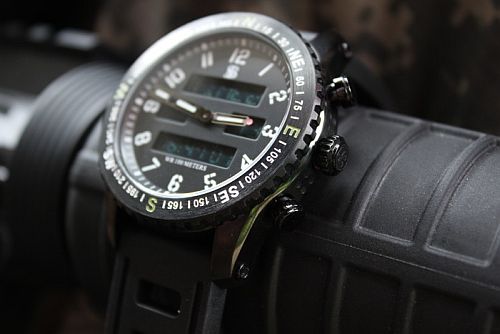 Ok, so that last Kickstarter project I put up was a bit of a last minute affair (that’s what we get for having me cover these instead of Matt, eh?), so I’m making amends this time around. We’re giving you plenty of advance notice for the latest US-built watch on Kickstarter, the Smith and Bradley Ambush.

While we’ve seen a sports/diving watch in their Atlantis, they’re headed back more to the tactical roots that we saw with their Sans-13 model (speaking of, you can win one of those right here). This time around, they’re gone for something new for the brand – an analog-digital display. This, of course, is a popular feature for quite a few brands (say, Breitling or MTM). If they had stuck with a simple analog readout, the watch could likely have had a lot of the functions we have in the piece, but the digital readout really makes things easier to use. This is especially of importance to those who would be using this truly as designed – in law enforcement, for example. At first glance, the digital readout gives you a simple way to pick up a second time zone – or just read the time at night via the blue backlighting. So, why not just go full digital? Certainly, that would be an option, but then you’re into full-scale LCD design and manufacturing, and this is a simpler route to go – plus it’s a cleaner look. The analog hands also contain another bit of utility – when you put the watch into compass mode, the hands will indicate true north, while the digital readouts give you your current heading. Used in conjunction with the uni-directional bezel, you can orienteer pretty well, I’d imagine. Yes, a standard watch can do something similar (by using the sun), but this is a much easier feature to use, as it’s implemented here. This particular watch also incorporates alarm and chronograph functions, so you’ve got quite a suite of abilities with the watch. If you jump in on the project (lowest tier is currently at $315), they’re estimating having the watches shipping out by the end of November. As their project page states, this isn’t their first rodeo, so as long as funding hits before the project closes on September 11, this is a watch we should see getting made (and it’s already 90% funded). Of course, when that happens, I’ve a feeling we’ll be able to bring you a hands on review as well. For now, check out the project page for additional details.  smithbradleyltd.com