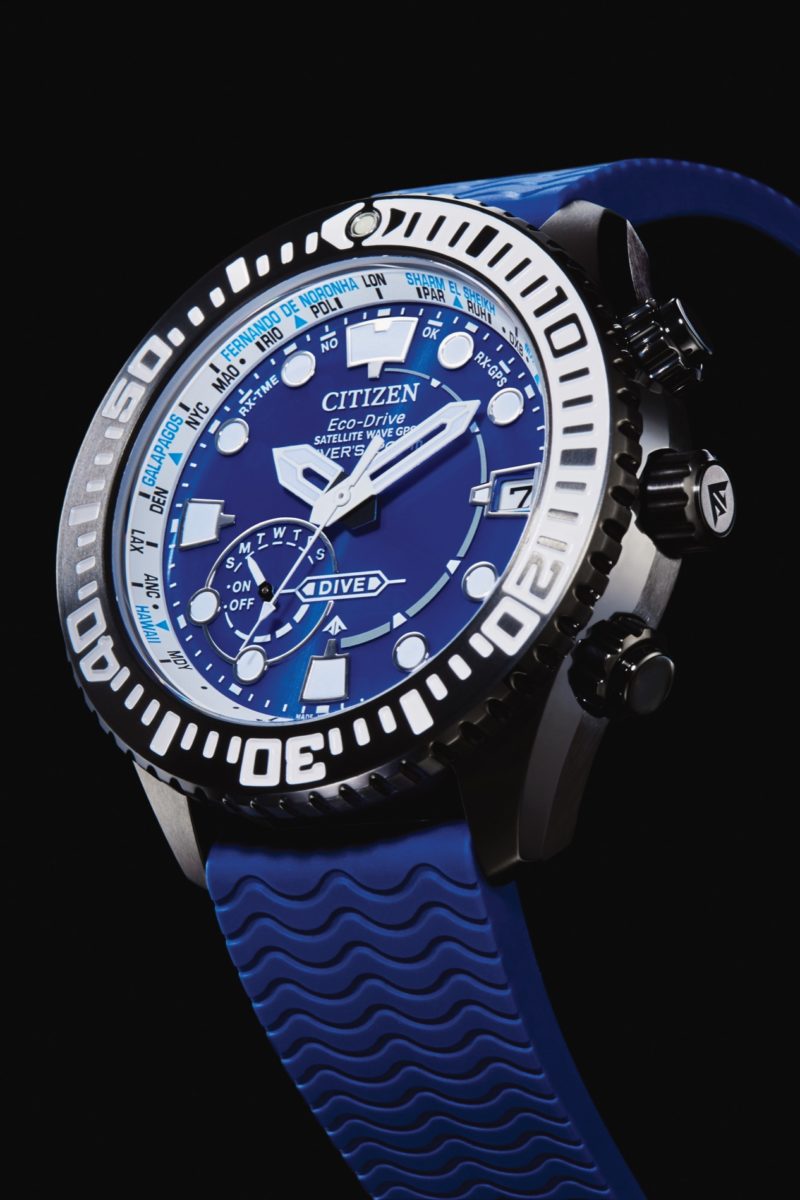 When people think about cool and capable dive watches, for some reason I don’t think many of them consider Citizen – and you know, that’s a shame. They’ve got a wide variety of watches that can fit the bill, but their latest release – Citizen Promaster Eco-Drive Satellite Wave – really packs a lot of tech into it’s titanium case.

So, yes, let’s start with that – titanium. As we’ve said here before, titanium really is a wonderful material for a watch. It gives you all the strength and durability you’d want from a steel watch, but with a LOT less weight on the wrist. Not only that, it’s also scratch and rust resistant, which is helpful for a watch intended to spend time under water.

Now, by the rest of the name of the Citizen Promaster Eco-Drive Satellite Wave, you can figure out there’s some fun stuff from a technical perspective built in. With the Eco-Drive name there, that tells us it’s a solar-powered watch. Satellite wave? That means that the watch can talk to the GPS satellites to get the time and date, and automatically correct itself if you’re traveling around a bit. I’ve long maintained that having a solar-powered, automatically syncing (either via atomic clock signal or GPS satellites) watch is a great bulletproof watch to have in your drawer, and everyone should have one.

Then again, with a lot of tech packed into a watch, knowing which pusher to use to do the right thing can be a complicated affair on a watch like the Citizen Promaster Eco-Drive Satellite Wave. Now, for you divers, they’ve considered this, and created a sort “dive mode” lockout feature:

?By pressing the push buttons at 2 o’clock and 4 o’clock simultaneously, the watch enters Dive mode. All functions, except time display, will be ceased to prevent erroneous user time operations at the push of a button. The watch itself is waterproofed to up to 200m, conforming to ISO standard.

Additionally, the watch is equipped with a charge-level display function and light-level indicator. It will not enter into Dive mode if the charged battery amount is insufficient so that diver knows if the watch is not in optimum condition before diving. It runs approximately seven years on full charge when power-saving mode is activated.

I’m not a diver, that but sounds like a handy set of tricks – keeping you out of dive mode if the watch doesn’t have enough charge, and then ensuring it remains in dive mode while you’re diving. There are two versions of the Citizen Promaster Eco-Drive Satellite Wave currently available, with a green dial ($1,350) or a blue dial with black treatment on the titanium for $1,395. Again, I’m not a diver, but this does look like a serious tool for serious swimmers. Or world travelers who like to pretend they dive. citizenwatch.com