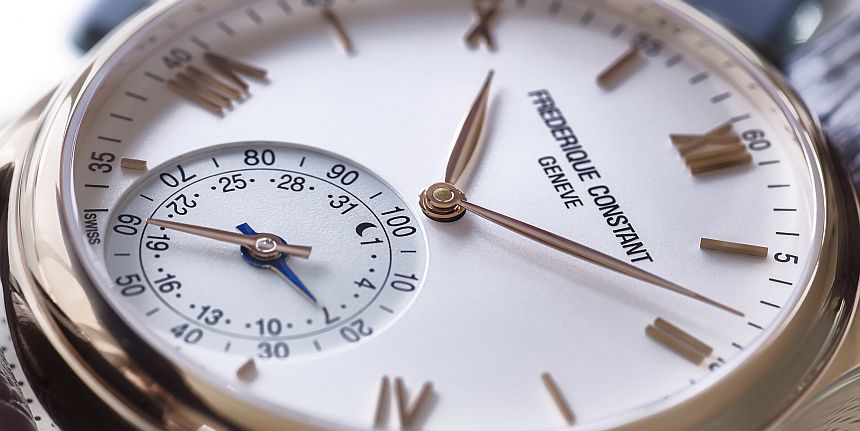 When it comes to the world of smart watches, one of the big complaints I have heard (and read about) is that they simply are not designed to be appealing to those who appreciate watches. Many of them are gadgets first, and just happen to be able to be strapped to your wrist. That argument is losing a lot of steam now, especially with the announcement of the Frederique Constant Horological Smartwatch.

That’s right – the purveyor of affordable Swiss luxury watches has entered into the world of activity and sleep tracking. Really, that is probably the more accurate way to think about this watch – it is an activity tracker that is hiding inside of a rather sharp watch. For the tech portions to come to fruition for this Horological Smartwatch, a new joint venture was formed. This venture has Fullpower Technologies (of Silicon Valley) and Frederique Constant coming together to form MMT (MANUFACTURE MODULES TECHNOLOGIES SÀRL). Through MMT, headquartered in Geneva, the Fullpower technolologies are combined with the watch movements for Frederique Constant (and, of note, Alpina). Fullpower is also responsible for the creation of the smartphone applications (both Android and iPhone). If you’re unfamiliar with the name, you probably are aware of their prior work, which has included wearables for both Nike and Jawbone, among others.

While this initial implementation is limited to Frederique Constant, Alpina, and Mondaine (in their Helvetica line) the goal of MMT is to integrate with the wider Swiss watch industry. I think that is something to keep an eye on, especially as the Swiss brands are all making noise about getting into the smartwatch waters; something like the MMT venture could be an easier route to go.

This could certainly work because the MotionX component is simply another module to be integrated into a watch. It is of course up to the brands to design something appealing to fit it into, but that is what the brands do best. In fact, looking at the Frederique Constant Horological Smartwatch, you could very easily dismiss it as another analog watch. You’ve got a two-hander setup (no seconds shown here), with applied indices on top of a white dial, all with a liberal dose of gold all around. While it’s a nice, dressier, watch, it may not be all that intriguing if things stopped there. The subdial is where it starts to get interesting. First off, we have a date indication showing up there. Not my favorite way to display a date, but it is what it is. What about that other hand there, though?

That’s an indicator of your activity from the day. As you go about your day, that hand will swing around indicating what percentage of your goal you have hit. The moon, well, that’s another trick up the sleeve. As I mentioned earlier, the Frederique Constant Horological Smartwatch can track your sleep as well. To engage that, you depress the crown (more on that in a second) until the hand moves to the moon, and then the watch is in sleep mode.

So, about that crown. Turns out, it is actually a pusher. That means that, on the Frederique Constant Horological Smartwatch, you cannot actually set the time on the watch with the watch. For that, you will need to use the app on your smartphone. On one hand, I appreciate that, with this method, you’ll always have an accurate time. Flip side of that coin is that not being able to set the time on the watch is a drastic shift, and would take some getting used to. Plus, with a quartz movement, it’s not like the timing should drift that far off regardless. I suppose it would be a neat trick when travelling – once your phone picks up the new time, the watch should adjust to reflect it. Given the connection to a smartphone, battery life would be a valid concern. Since we’re not relying on any screens, or notifications going from the phone to the watch, the battery is expected to last a solid two years. That’s right, not days, but years.

Another benefit of the smartphone lashup is that they will be able to release new firmware for the Frederique Constant Horological Smartwatch. I cannot say that this will add a ton of new functionality to the watch itself, but it should allow them to tweak and refine things over time. Additionally, it sounds like there are plans for the guts of the watch to actually be upgraded. This is a nice concept for any future owner, knowing that your watch can (and likely will) be upgraded over time.

The Frederique Constant Horological Smartwatch is definitely an interesting option in the burgeoning smartwatch market. If this takes off, it will show that making something a watch first, and then adding smarts after, really is a good route to go – at least for those of us who are really in to watches. Something like the Frederique Constant Horological Smartwatch I think makes the most sense for a watch lover who wants to start tracking their fitness, but really doesn’t want another band strapped on their wrist.

At this point, pricing is not exactly known for the Frederique Constant Horological Smartwatch. In the writeup over at aBlogtoWatch, they venture that the opening price should be around $1,200, with the full range estimated from $500 to $2,000 for the high end pieces. Availability is expected sometime around May or June; I know I’ll be curious to see how these are received when they do come out. frederique-constant.com One thought on “Introducing the Frederique Constant Horological Smartwatch”