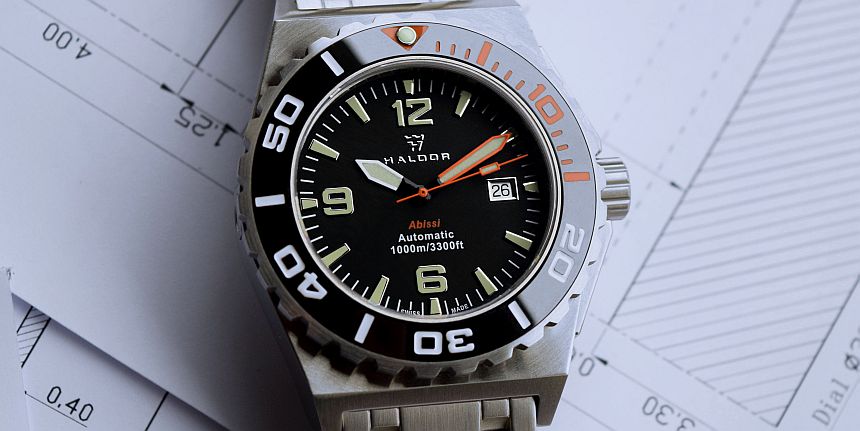 When it comes to dive watches, especially those that we see showing up on the crowdfunding sites, they are decidedly more of an entry-level proposition. I am not saying that there is a problem with that (quite the contrary), just stating a fact. That makes it all the more curious – or interesting, depending on your view – that we caught word of a new higher-end sort of an option showing up over on Indiegogo. The Haldor Abissi 1000M just launched, and offers some rather nice specs especially for the pricepoint. First, let’s talk about movement. Many mechanical divers we see these days coming from the indie brands feature a Miyota of some form. This makes sense, as, while the movements are not the most aesthetically interesting ones, they are reliable, sturdy, and rather inexpensive. Then again, there are those who want only what the Swiss produce. If you find yourself in that camp, then the Haldor Abissi’s ETA 2824-2 will be of interest. Yes, the 2824 is another well-known (and, at this point, entry-level) Swiss movement, but that makes servicing it a relative non-issue. This one is top grade, so that elevates it a bit over the standard version. The next spot on the Haldor Abissi that differentiates it is the bezel. At first glance, you might think that the 120-clicker has your standard insert, due to the higher gloss. This is actually ceramic (ZrO2 for those into materials), which, along with the high gloss we see, will offer a great deal of scratch resistance. Unfortunately, the only lume on the bezel is the pip (perhaps v2 we will see it on the numerals). The insert is set into a very gear-like bezel which should be fairly easy to grip and turn. Likewise, the larger crown should not present any manipulation issues. Those particular features are helped along by being a bit oversized to match the 45.5mm diameter of the watch. This comes courtesy of the rather angular stainless steel case, which is an interesting study in contrasts. Up top, you have the rather sharp edges on the sides, and where things drop down to form the lugs. When you flip the watch over, though, things are very rounded and smoothed off. This apparent dichotomy has a rather good reason (or at least what I think is a good reason) – smoothing it out makes for a more comfortable watch. Not that the 15.5mm thick watch will be disappearing on your wrist, but it should be comfortable. Which is good – given the amount of steel necessary to hit a 1000m WR rating, this is a watch that should be somewhere closer to the 200g mark. As I mentioned, the Haldor Abissi does carry a 1000m WR rating. This is a bit of overkill for most of us (especially those who do not even dive), and is helped along with the inclusion of a helium escape valve. That particular feature is truly useless to all but a very select few (saturation divers, I believe), but I think has almost become a sort of inherent marketing for those less well-versed in what it is actually for, and has become almost de riguer for these “rough and tough” divers. Topped off with a relatively thick sapphire crystal, the Haldor Abissi offers some interesting dive watch styling. The dial itself looks crisp and legible (with plenty of Rolex-style text on it), and the case shape gives that vintage feel to it that many seem to be looking for. I also like the five-link bracelet, as , along with carrying forward the angular looks, has a different pattern on it (from left-to-right) than I would normally expect to see. Time will tell how the Indiegogo project goes, but you can get in on it now with introductory pricing starting at around $550. After the campaign closes, the pricing will go to it’s normal MSRP of $820, so it is a nice discount. We’ve not seen this one in person, but the specs and images are promising. Once product is available, we’ll work to get one in to give you our hands-on impression. haldorwatches.com