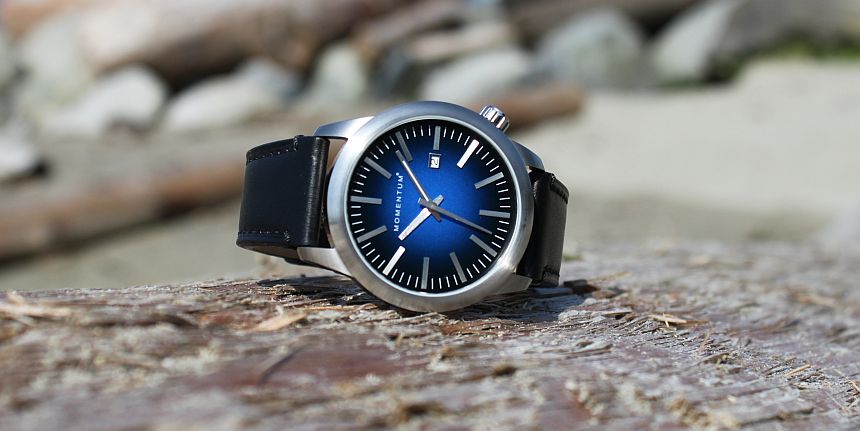 As I have mentioned previously , there is just something about a steel-encased three-hander that makes for a very flexible watch. There are, of course, no shortage of options, and I have recently run across one from a brand that we have not had on our pages in some time – Momentum. With the Momentum Logic, there also exists the possibility for you pick up a his-and-hers combo, were you so inclined. For today, we will start with the men’s model, the Momentum Logic Steel 42. As you can surmise from that product name, the stainless steel case comes in a 42mm diameter – a good modern size that tends to be “big enough” for most wrists without being overly dominant on the wrist. The weight for the watch, even on the steel bracelet, is a rather manageable 138g. The astute observer will realize that there is really only one way for that lighter weight to be achieved in a steel watch this size, and that is be using a quartz movement. The choice of a quartz movement, aside from it’s inherent accuracy, gives the added benefit of allowing a slimmer case design – in this case 8.5mm, which is pretty thin. This should appear to be even thinner to the eye when taken in comparison to the diameter. The offset crown position calls to mind the layout often favored for Miyota mechanicals (not sure if that is what is included here), which also manages to get the crown to a position where it is less likely to dig into your wrist. The movement, of course, drives the time and date displays on the dial side, which are decently done. On the Momentum Logic, you have fairly basic stick indices around the dial, and a handset that mimics a similar shape (it widens as it nears the central arbor). While the handset features a narrow strip of lume (only on the hour and minute), it does not appear that the indices have any. So, while you might be able to read the time shortly after getting into a darkened room, do not anticipate all-night readability (in the dark) here. That said, the handset is well-sized for the case. The date display highlights that the movement is much smaller than the case (given its position), and unfortunately only comes with a white background. While I would have liked to have seen a darker disc here for the dark dials, it does not look too out of place, as there are a number of lighter elements on the dial. The Momentum Logic is also available in a 36mm diameter, which also drops the lug width from 22mm to 18mm. Other than that, the watches are virtually identical, in terms of the raw specs and basic styling. On the smaller version, there is an introduction of a gold tone version, and there are some more fanciful dial options. On the larger Momentum Logic, you have a choice of four dial colors (black, blue, white, wood) and either a bracelet or a leather strap; the womens model comes in either black or white (in steel) or white or rose (the gold version). The Momentum Logic represents a decent three-hander that offers 100m WR to boot. As it turns out, it is a rather affordable watch as well, with prices on the leather band starting at $145; going with the bracelet will bring the price up to $195. Then, inhabiting the top of the line for this model is the gold version, which comes in at a still very affordable $225. While the quartz movement may turn off some buyers, there is something to be said for the accuracy and 5-year battery life. Let us know in the comments what you think, and whether or not you seek out watches that make it easy for you and your significant other to have similar ones on your wrist. momentumwatch.com

One thought on “Introducing the Momentum Logic”