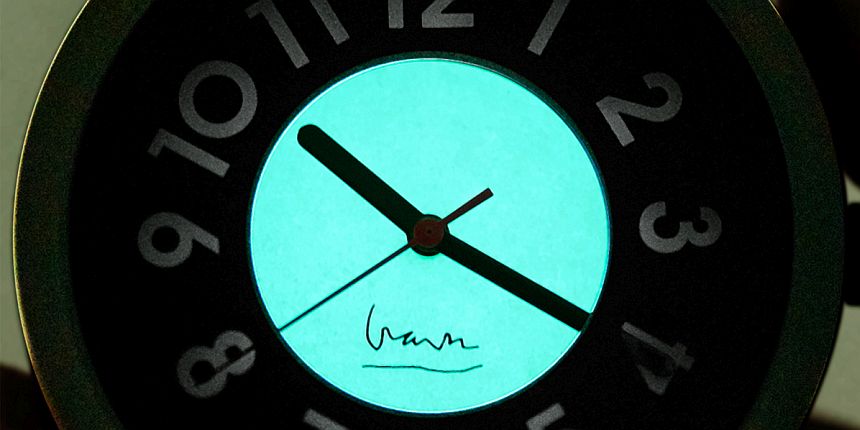 For those familiar with the watches that Michael Graves designed for Projects Watches, you might be wondering why we are talking about a watch that was designed and first released back in 1998. Simply put, the brand is re-releasing the watch (in two limited-edition variants) in a tribute to Graves. Let’s have a look at what this new Projects Watches Newark Museum Watch is all about. As you might guess from the name, the watch was designed for a museum in Newark. Having never been there, I cannot speak as to the specific inspirations, so we will just focus on the watch itself. This one in particular has a feature that is a fun one in the watches I’ve seen it on – printing on the crystal. Here, the outer disc that contains the numerals is actually printed on the mineral crystal, which lets the hands then float underneath them as they spin around. This, of course, adds quite a level of depth to the Projects Watches Newark Museum Watch. Apparently Graves also felt that the illumination (here provided by the EL function of the 6N30 movement) provided an additional level of depth:

“In the Newark Museum Watch, there is a feeling of depth that one doesn’t usually associate with timepieces, between the rings emphasizing the face of the crystal, and the actual watch face beyond the “glow” feature, with its blue colored light which increases the feeling of depth.” – Michael Graves

For my part, I simply like the looks of that glowing blue disc in the center which then gradually bleeds out to the edges of the dial, giving the numerals just enough light to make them visible. While you might be concerned that a 17 year old design might not work well in today’s preferences, there should not be a worry – the steel case comes in at 40mm, and is paired to a 20mm strap (leather or silicone, depending on the model chosen). I think that the design has aged quite nicely, and should not stand out as being from a particular era, just as one that was well designed. There will be 150 numbered pieces of each variant (300 total) at a price of $159; they open up for pre-order on August 15th, with shipment expected by September 15. projectswatches.com