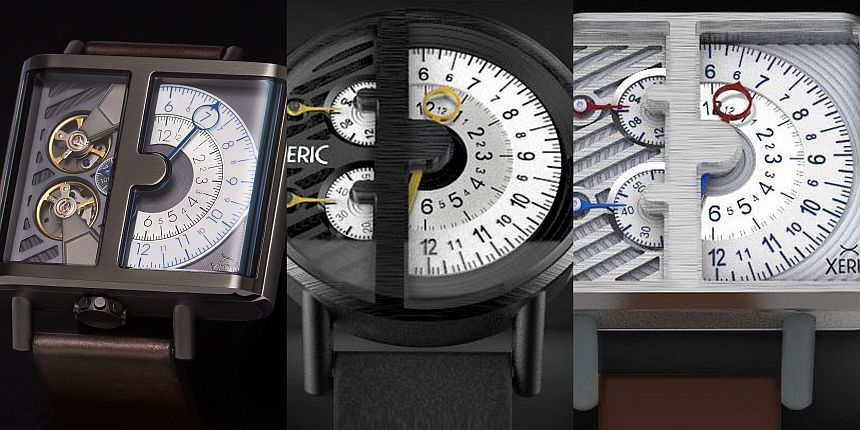 After what seemed to be a drought of interesting watch-related projects on the crowdfunding sites, we have been seeing a flood of more interesting things cropping up. Xeric (which the guys from Watchismo started up) has been creating watch designs that break from normal conventions, keeping in line with the quirky and interesting designs that they offer on their site. Their latest designs, in the form of the Xeric Soloscope collection, mix in some elements of previous models and bring some new things to the table. The most prominent design cue that is pulled forward from prior Xeric models is the handset of the Xeric Soloscope. Well, more precisely, the hand. There is a single, double-sided hand that pivots around, indicating the time, with indices marking out the 5-minute marks in time. On the automatic version of the Xeric Soloscope, this is fairly straight forward. With the quartz versions, there is a 24-hour movement that gets into the mix. Yes, that’s right – there are two movement options here (quartz and auto), with the quartz offering two different styles; all 3 of the styles have various colors on offer. For me, the automatic version of the Xeric Soloscope is the most visually stunning, due to the twin balance wheels of the PTS S-05 movement that show up prominently on the left side of the case. If I can see some part of a movement at work (preferably not with a cutout on the dial, though) that is a big bonus to a watch. Also nestled in between those balance wheels you have the running seconds dial, so the left side of the 49mm x 42mm case of the Xeric Soloscope Automatic should be rather kinetic, and let you know the watch is still running. The right-hand side of the case is where you have a half-dial, with two tracks to indicate the time. As the hand moves around, it will have either a longer or shorter side on the correct track. In theory, you could use the light and dark differentiation as a sort of subtle day/night indicator as well. Of course, not everyone may be as enamored of mechanicals, and would instead prefer the reliability (and price discount, more on that in a bit) that a quartz movement brings to the party. To that end, the Xeric Soloscope is also available with a Miyota 24h quartz movement, in both round and square implementations. The square version looks very much like the automatic, though it is a touch smaller (41mm square), and you have two dials (they appear to be hours on top, and seconds below) taking the place of the twin balance wheels. The round variant of the Xeric Soloscope follows that same quartz layout, but presents in a 44mm round case instead. All told, the Xeric Soloscope looks to be the most visually interesting of the Xeric watches to date. The handset keeps it firmly in the family, but expands out to explore some new things. The automatic version of the Xeric Soloscope has earlybird levels starting at $359, while the quartz versions (round or square) start out at $239. Regardless of the movement, you look to be getting a quirky but functional design (I say looks as we’ve not seen these in person). Also of note? The straps on these watches should be quite nice, as they’re made from leather coming from Horween. As of the time of this writing, the project, which closes May 27, is already 350% funded. Adding that to the track record of the brand, and these should be watches that will be getting produced. Do let us know if you jump in the project, and sound off in the comments below as to what you think about this new design. xericwatches.com