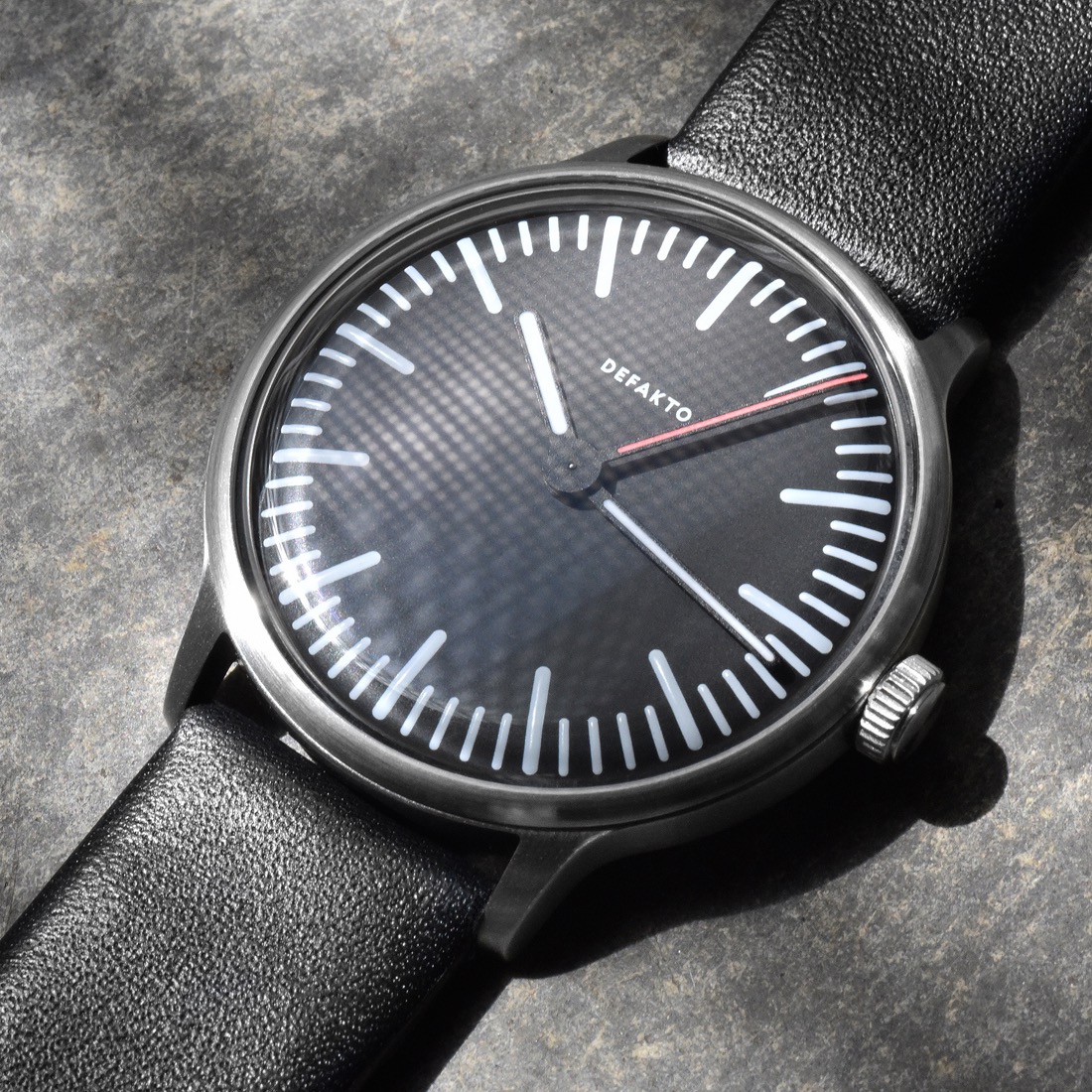 When it comes to watches, and particularly three-handers, there is a lot to be said for the classic look and styling – it’s timeless and it gets the job done. But what if you’re a fan of minimalism, and want to avoid the carbon copies floating around on Kickstarter with very loose claims to the aesthetic? What if, above that, you want something that’s – shall we say – a luminous beast? Well, friend, you are in for a treat, as the Defakto Transit Standard was just recently announced.

Over the last year or so, I’ve become quite familiar – if not enamored – with the watches coming out of Pforzheim, be it from Archimede, Limes, or Defakto as we have here today. There’s a delightful consistency in the designs they produce, stemming no doubt from the Ickler-designed case. This time around, we’ve got a tidy 40mm case (44mm lug-to-lug) that manages a very svelte 9.8mm tall – which is inclusive of the domed sapphire crystal. You might think they went with a manually-wound movement in order to get things thinner, but that’s not the case here. Full automatic mode is engaged courtesy of an ETA 2824-2.

So, yes, the Defakto Transit Standard is starting off with a very solid foundation. The dial side is where things get truly elevated in my book. Under that domed crystal, it looks as if the dial itself curves down at the edges as well, mirrored by hands that curve down as well. And, speaking of dials, this is a very, very nice one. In the daylight, you’ve got a flat black standing crisply against the plush indices, which, wouldn’t you know, are actually Superluminova paint. That means, when the lights drop, this is one glowing beast. The hands are practically all lume as well, and mirror the look and shape of the insides on the dial. With the large disc on the seconds hand covering the pinion, the effect is to give you a handset that almost looks to be floating, or something of an ever weird nature, ala something from Ressence or an oil-filled Sinn. These are all very good associations in my book, and I’m sure will sit well with you, dear reader.

Unlike those other aforementioned brands, however, the Defakto Transit Standard is definitely much more affordable. If you’re in the EU, pricing with VAT comes in at 1080 EUR, or about $1,014 for those outside the EU and not subject to the VAT. Sure, at around a grand, you’re on that knife edge between affordable and entry-level luxury, and it’s going to be your own mindset and interpretation of those that will be what camp you put it in. For me, I quite simply am a fan of the simultaneously clean yet bold design paired into an extremely thin case. This is one we’re working to get a loaner in to do a full review, and it’s one I am very much looking forward to checking out. defakto-watches.com