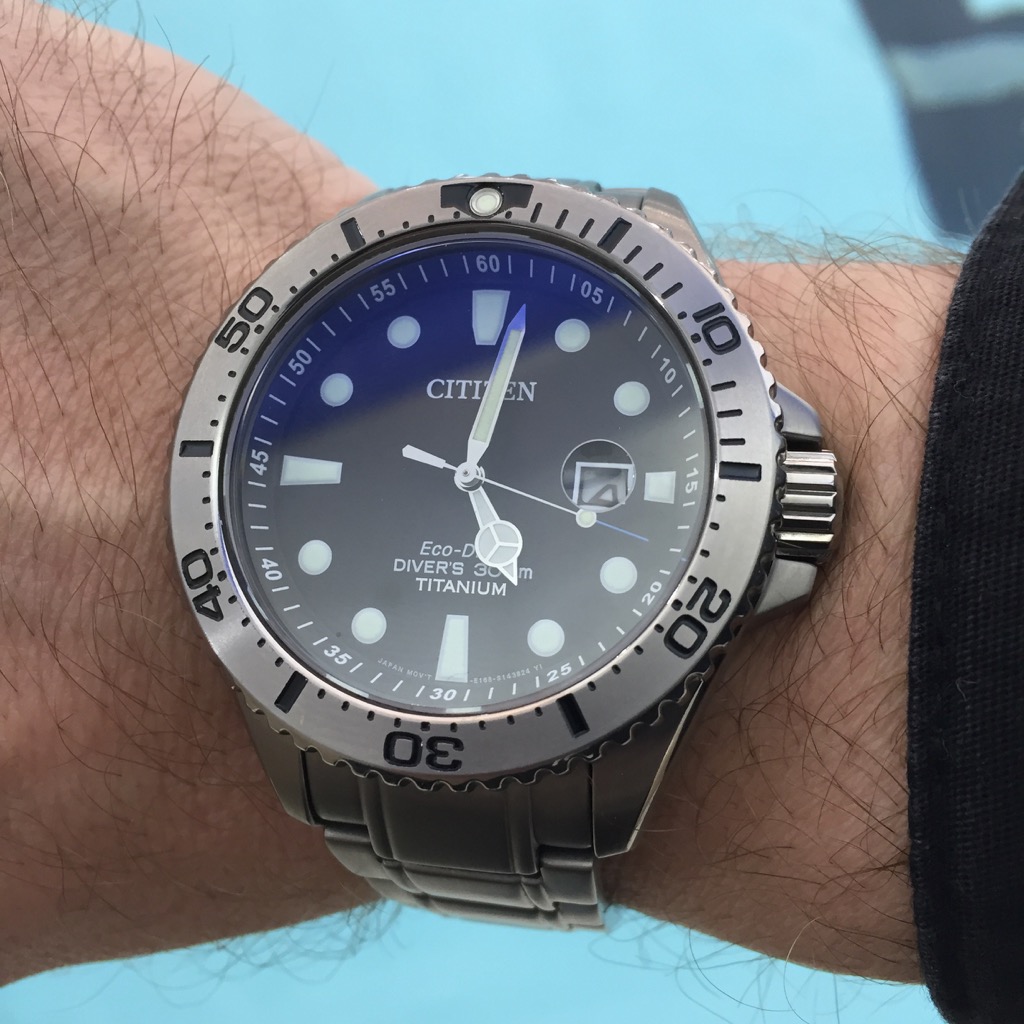 I want to talk about Citizen. Citizen has made a lot of impressive moves: they make Super Titanium, a hardened-surface treatment to titanium bracelets and cases, Eco-drive movements, and they bought Alpina and Frederique Constant. That’s not all bad. They also make the Miyota 82xx and 9015 movements, which are used in many of the micro-brand watches we review here. But Citizen has a problem, and it’s time to do something about it. Citizen’s own branded watches are boring, but it wasn’t always this way. It’s time to make Citizen great again.

The Nighthawk is the Nighthawk. It’s a premier aviation watch, and one that will always be memorable. But what of the Titanium Eco-Drives of years’ past? What of the truly good examples that aren’t available anymore? What should Citizen do? Let’s lay down some rules.

Points 5 and 6 are incredibly important. Suppose someone likes my watch, and wants to look for a similar one? I can’t tell them, “Oh, it’s a “Chandler”, because Chandler could mean one of four (or more) different types of watches. I can’t say, “it’s a BJ6500-12L,” because that’s not marked on the watch itself. There’s no practical way to actually recommend a Citizen watch to a friend or acquaintance. That seems like a significant failure.

Here are some things from the back catalogue:

The BM7080-54L – This watch retains the Squircle bezel shape that feels uniquely Citizen-like, but has an excellent 12-6 dial with sharp numerals, a lovely blue dial (other variations had a white dial, silver-gray dial, or black dial) and while large, feels very comfortable due to the light weight of titanium and the thinness of the watch height. It’s a 43mm watch, but wears so much more comfortably than any other 43mm watch I can think of. The letter at the end of the model number indicates the dial color: A is silver, E is black, and L is blue.

Here’s what’s the best of the current catalogue, and what’s wrong with it:

AW7036-51L is a lovely looking blue dialed Eco-Drive, co-branded with the US OPEN to celebrate a 25th anniversary. It isn’t exactly clear what the anniversary is, but it’s limited to 1,150 pieces. I like this watch a lot, although I’d be happier finding it without the US OPEN logo. Unfortunately, it doesn’t seem to be in the catalogue in non-limited edition anniversary form. It’s got a fixed bezel with 5 minute increments marked around the bezel. Why does a fixed bezel need diving minute increments? Is this $250 USD limited edition meant to help people new to wristwatches learn to tell time? Is it a faux-diver element? It has yet to grow on me, on what is an otherwise nice watch. It’s from Citizen’s PRT family, which I can only guess means “Power Reserve Something-or-other”, but there are no watches similar with the 12-6 dial, or the nicely angled hands. If you wanted this watch without the US OPEN logo, you’re out of luck. Citizen, listen to me: Plain dials are beautiful. Take off the US OPEN logo, remove the Eco-Drive script. Let it stand with just the two fonts in use (CITIZEN and the numerals), instead of the four I see here: CITIZEN, numerals, Eco-Drive, and the serif US OPEN text. It’s graffiti. Stop it.

AW7030-57E and AW7038-04L come close, but it has a 9 numeral, different hour indices, and still has the goofy numeral-marked bezel. In Citizen-speak, the L at the end of the model number means “blue dial” and E means “black dial.” No one should have to figure this out. Also, the 12-6 on AW7036-51L are nicer than the 12-6-9 on the AW7030-57E. I love a 12-6 dial watch. I like it when Schaffen does it, and I like it when IWC does it. I like it when Citizen does it right – the typeface on the numerals matter. Don’t make them italic, don’t clip the ends of the numerals to make them futuristic, don’t make them 6-9-12 with a date. Do use the tuxedo / tapestry dial texture as seen on CITIZEN PRT

$275.00 AW7030-06E or CHANDLER $195.00 AW1430-86E
BN0191-55L is a nice diver, and listed among the Best Sellers at Citizen’s site. It’s a pale shadow of what the old BN0141-53E was. The original Rolex Submariner was a tool watch before it ever became high-dollar jewelry. There’s a use for a tool watch that isn’t a G-SHOCK. Seiko answers that question with the Orange Monster. This is Citizen’s opportunity to answer it with the BN0141-53E, potentially with different bezel colors… and they don’t even raise their hand in the classroom to attempt to answer.
CHANDLER $195.00 BJ6500-04L gets it right. It’s simple, utilitarian, and is well proportioned without added flair. Why can’t they use those as principles for all the watch family? Or even just “watches named CHANDLER”?
The first problem with the current catalogue is that you can’t identify a model easily. Several things that look completely different are given the same model name. The only way to identify a watch is by its model number. Except, no one really wants to refer to a watch as a convoluted model number. If you like a Citizen Chandler, heaven help you try and describe which one you like.
The second problem with the current catalogue is that it’s too diverse. In men’s watches alone, there are 253 watches listed. This number is a little misleading; they publish duplicates on the site, but not for most of them. Suffice to say, it’s not a stretch that Citizen has somewhere between 240-250 watches in the Men’s collection. This is nuts. Normally, this would lead to paralysis of choice: with too many options, you can’t choose, and buy nothing. Here, that’s still true, but it’s not due to paralysis: it’s due to the third problem.
The third problem is that the vast number of these watch designs are unappealing. There are a bunch of designs that somewhat mimic other brands, but nothing that nails that mimicry or improves upon it. The AXIOM models are more or less in the Movado / MARC BY MARC JACOBS realm. The BRYCEN is mostly in awful Breitling territory – except when it isn’t, because: see problem 1, model names are re-used without regard for whether or not watches look similar at all. It’s fine and well to attempt other brands’ designs and make them your own, but be more judicious in what you copy – pick the very best examples. You don’t need 37(!) AXIOM Movado-copies. Who is the customer who is buying it? Who should Citizen’s customer be? The Octavia looks somewhat like a Girard Perregaux Laureato or AP Royal Oak, but with graffiti on the bezel, marking 5 minute increments.
While we’re on the subject of other watch brands in relation to Citizen, there’s an opportunity here: Seiko, their close competitor, has a couple of models that watch lovers strongly identify with: The Monster and the SARB. SARB017 (the Alpinist), SARB033 and 035, are affordable, go-to recommendations for every watch fan. They come up all the time as a watch everyone should own at one point. Seiko is making the baffling decision to discontinue the SARB line, and instead is pushing the Presage watch family, which has a completely different (and worse) case shape. Citizen could take it’s place if they chose. I fully expect them to miss that opportunity. The real shame is that it’s not that far out of reach. They could do this. They also fail to bring the best of their Japanese domestic watches to the US. PMD56-2951 / -2952 and the limited edition BN0111-54E are quite nice, and a little more sporty than a SARB with wider lugs and sport dial.
What Citizen lacks is a uniform set of principles for design. For example, if they set forth rules that said, “Watches have to be readable at a glance. Designs should be made with purpose and without ostentation.” To achieve that legibility, they could focus on making designs that pull the eye to the center of the dial first, and then out through the hands to the markers. The hands need to have lots of lume, and the face can’t have any extra frippery. All information should be on the dial, with bezels kept plain, with three exceptions: aviation watches, diver watches with rotating bezels, and chronographs with scales engraved on a bezel. If they set design requirements in this way, they could follow through on those goals. If they really adhered to a specific set of guiding principles, we’d be able to tell just from observation. At present, there’s no clear idea of what makes a Citizen a Citizen.
Lastly, a word on movements. Citizen is proud of the Eco-Drive movement, in all its various iterations. That’s fine. They should be. But they also make automatic watches, something we favor here. Of the 253 watches listed for men on their page, only 9 are automatics, and not one reaches out and speaks to me. Of the 9, 7 are two-tone. There could be some real wins there with a few adjustments to the Octavia models, or the Grand Classic. Every one of these models is priced above $1000 USD. There’s nothing in the range for the person who wants to spend $500 or less. It seems strange that in order to have a Citizen automatic watch, you have to buy one from a competitor. For all these reasons, it’s time to make Citizen great again.