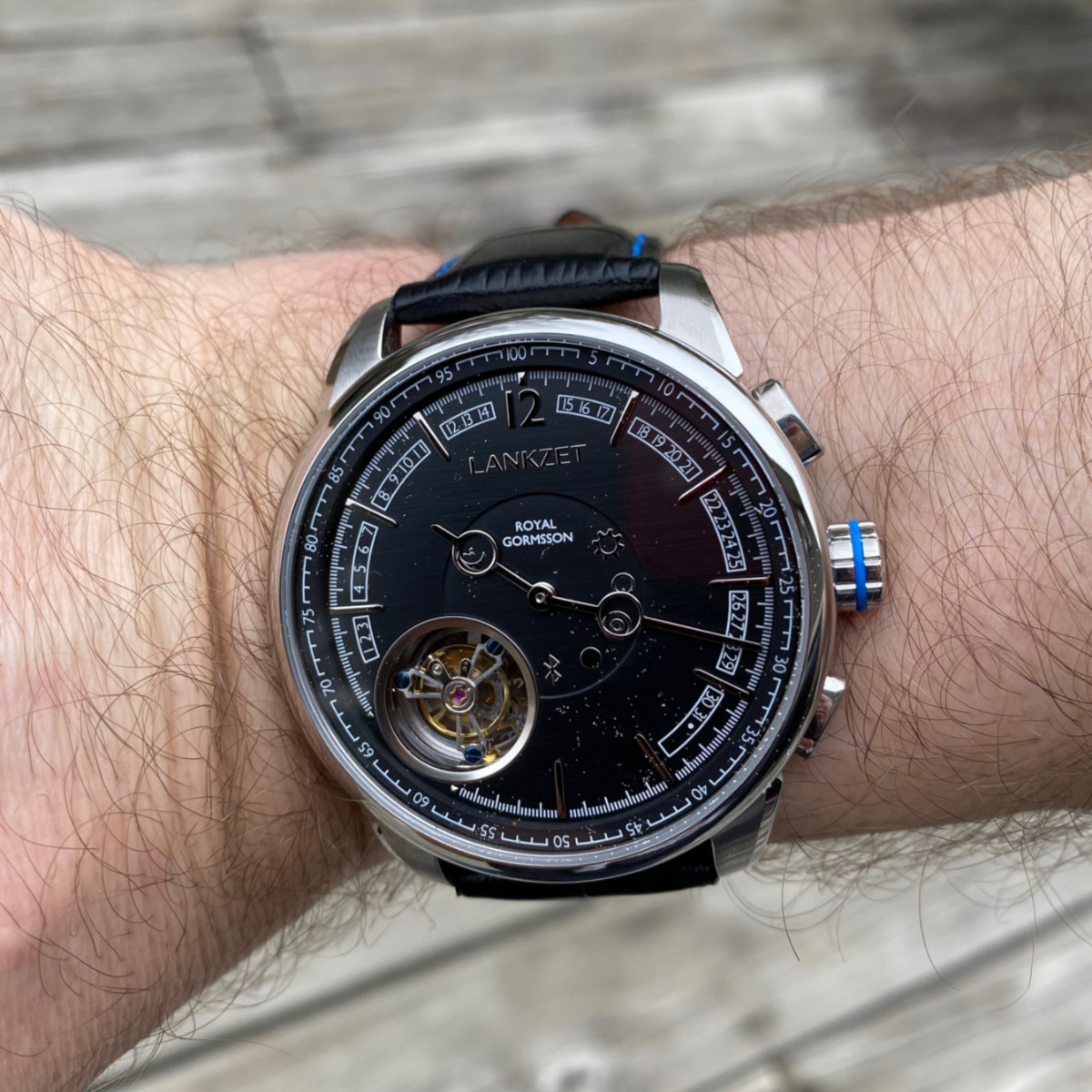 The Lankzet Royal Gormsson is a crowdfunded tourbillion hybrid smartwatch. What does this even mean, and should you want one?

A tourbillion is an invention originally used to make pocketwatches more accurate. Instead of a balance fixed by an arm or bridge, the escapement rotates. The idea is, by rotating the escapement as a whole unit, it minimizes any effects of gravity on a normal balance wheel held in one position.

And that’s cool, but the Lankzet is a smartwatch. The hour and minute hands are driven by motors, powered by batteries. The tourbillion is pretty, but it doesn’t actually make the watch more accurate. It’s a manual wind movement, so wind 10 or 20 times until you meet resistance and stop. When it runs down, wind it up again. It’s a very nice looking toy, but it’s a decoration here.

The smartwatch works with Android at this time. The app is not currently on the Google Play Store, which makes it a little more difficult to review.

The smart watch features are about what you’d expect from an analog face watch:

The Lankzet Royal Gormsson is water resistant to 5ATM, and the back of the watch is visible through a display back. The tourbillion is visible from both front and back, and is delightful to watch, dutifully spinning around in its cage.

Mechanically, there’s a keyless works wind the mainspring, the mainspring barrel, and the tourbillion escapement. Electrically, you set the hands by placing the watch in SET mode (both pushers) and then using the pushers to advance the hours or minutes. Alternately, if you have the Bluetooth connection paired, you can set the watch from the app, which results in the date and calendar data being synced as well.

The back plate of the watch movement covers the battery and electronics, and is nicely decorated with stripes. The side of the case is marked with the ROYAL GORMSSON name. The crown is signed and the whole thing is polished and brushed nicely, and paired with a brown leather strap with blue stitching.

What should you be concerned about here? The app and the battery. If you buy one of these watches, you’re relying on Lankzet to support and update the application. Without the application, you have a watch that has a number of features, but will be difficult to access or modify.

And, the battery. The battery is sealed in the watch underneath the back plate of the movement. In order to replace the battery, the watch is going to have to be sent to a service center. The manual suggests that the battery should last for about 2-4 years depending on use and power saving modes.

If you’re the sort of person who liked the Frederique Constant smartwatches, and want the playful elegance of a tourbillion, the Lankzet Royal Gormsson could be for you. $399 gets you in if you pledge through the kickstarter.