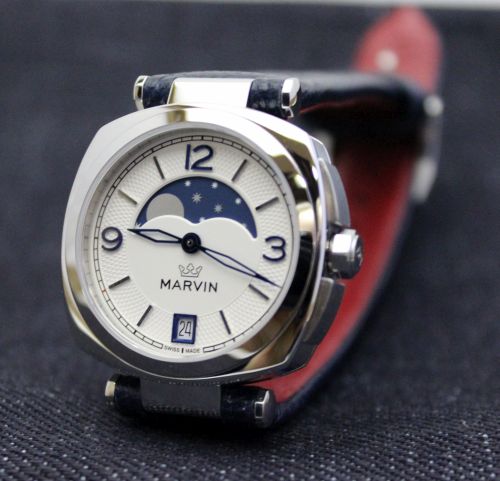 We recently had our first foray into review a ladies watch from Marvin, one from their M025 collection that followed a conventional style overall, and tweaked things a bit with dial layout and strap materials. In today”s review, we”ll have a look at a watch that features styling and functionality we”re more used to seeing in a men”s watch. First things first, though, let’s get the model name out of the way. As you recall, Marvin relies on model numbers (rather than names); this particular reference is the M022.12.39.75. For obvious reasons, we took to calling the watch the Moonphase, as that’s by far the predominant feature of the dial. It also happens to be the first thing on the watch I”d more commonly associate with a men”s model. The other, perhaps less obvious, feature is the case itself. For the M022, Marvin went with a cushion-style case that measures in at 30mm square. Case style preference is of course quite personal, but I was pleasantly surprised to see something other than a round or oval shape appearing in a women”s watch (disclaimer: I rather like cushion cases). While you might be tempted to just say it”s a men”s model on a smaller scale, I think it”s more than that. I”d call it, instead, a piece that references a larger watch, but takes things in a direction to make it unique in it”s own right. To do that with the case, they’ve changed the lug style over to an inverted orientation. This means that, rather than the strap slipping between the lugs, the strap instead surrounds the lug on each side, with a polished hex-head pins holding things together. While this does make it a little trickier if you want (or need) to swap the strap out, it does give the case a softer touch, and an overall more compact look and feel. Then again, this strap likely isn”t going anywhere in a hurry, as the patterned leather is in a deep navy blue, and features the sharply contrasting red leather backing. Inside the case (which of course has the finishing and engraving we see on all Marvin models), you’ve got a variety of textures and surfaces to catch the eye. The outer edge of the dial has an almost-guilloche look to it (and yes, if you look over at 8 o’clock, you”ll see a small tick of red), on top of which the numerals and indices are applied. You”ll also find the date display in this “track”, down at the 6 o”clock position. You”ll notice that, unlike (generally) a men’s watch, the date display is near the edge of the case, which indicates that there’s little to no empty space in the case itself. For the inner portion of the dial, you’ve got a smooth surface where the Marvin logo is printed, and up top, you’ve got a cutout that comprises about a third of the inner portion, wherein we’ve got the moonphase display. The artwork is neither ultra-realistic nor cartoonish; if anything, I’d call it simply elegant in how it portrays the moonphases (and, of course, a random starfield). This works just as you would expect on any other watch, with the disc moving it”s way from left to right.

I took a rather quick liking to the watch, even though it wasn”t one I was going to be wearing. So, it’s only fair that we get my wife’s thoughts, as she did the “real world” wear testing of this particular model.  While she wasn’t as initially “won over” as she was with the tweed strap of the other model, it was the dial of this watch that ultimately drew her in.

While the blue strap itself didn’t click, she did like the use of blue throughout the dial (handset, numerals, indices), as well as the uncluttered moonphase display.  The last component of the dial she commented on was the inclusion of the date display, which she appreciated, in just having a non-electronic way to keep on top of what day it is. Coming in at a price of $760, this is a quartz-driven (Ronda 708) watch that offers a bit of a break from the norm when it comes to women’s watches, but could easily be viewed as complementing a watch that a man would wear – in other words, a subtle way to perhaps get a his-n-hers set of watches without things being completely identical. While the large moonphase and skeleton handset may not be every women’s preference, I think those looking for a watch that eschews the typical women”s watch trappings (gems and hearts) will be pleased with what Marvin has come up with. marvinwatches.com * Why yes, that IS denim from Gustin showing up in the picture backgrounds – how observant of you!