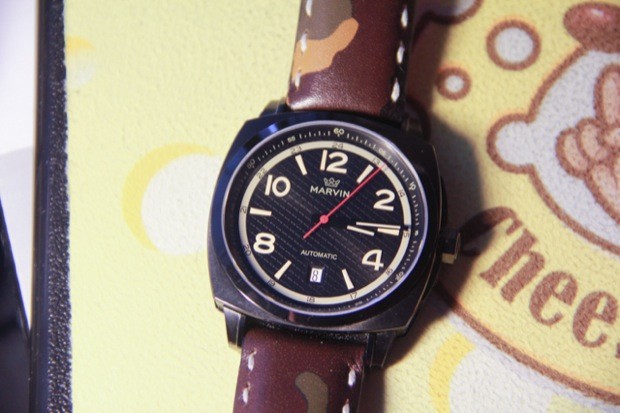 I’ve been following Marvin for a while and I’ve been impressed with the understated styling and acceptable pricing of this brand. This piece, the Military Cushion, for example, retails for about $1,500 which is more than acceptable for a hand-made, Swiss watch. It uses a non-manufacture Sellita SW 200 movement (Sellita is the AMD of watch movements, with ETA being the Intel) and features a nice, solid steel case and “camo” strap.

First, a bit on movements. This watch uses a very standard “ETA clone” Sellita movement with a seconds hand and hour/minute hands. ETA, a watch movement manufacturer, is owned by the Swatch Group and has slowly been cutting the stock it sells to outside manufacturers (it’s also why most watches cost so much because the ready-made movement industry is essentially a quiet monopoly). Sellita, then, is a relative upstart in the industry and makes attractive, nicely finished watch movements in relative bulk.

To be clear, there’s not much going on here mechanically. It’s an automatic three handed watch with no bezel – you won’t want to dive with this thing – and it features a date window at 6 o’clock. It has a 42mm face and guilloché dial. The entire case is PVD-coated and has lumed hands. The has very bold numerals at the five cardinal points and is very readable. What makes it expensive? Mostly the hand work that goes into prepare each of these for sale as well as the stainless steel and the sheer expense of acquiring the movement. This, not unlike many nicer things, is hand-made from stem to stern.

Like other personal favorites, Xetum and Bathys, I like this brand because it costs far less than similar three-handed watches yet offers superior build quality and movement. Like Tissot, Marvin is a quality watch vendor in the low end of the scale and that means it uses pre-made, popular workhorse movements and depends a lot on styling and marketing. That said, there is little in this watch to dislike and, if you like the style, it can become a solid first timepiece for a novice collector.

As a chronograph fan, however, I found the piece a bit modest. The military motif obviously a style play and there’s little new other than the colors. Marvin’s Cushion model has been around for a while (this particular model was announced in 2013 and is just now shipping) but it’s sufficiently unique and doesn’t look like the average Rolex. However, it’s nice to see a solid watch with clean lines come in at under $5,000 and it’s definitely worth a look if you’re looking to spend some of your liquidity.