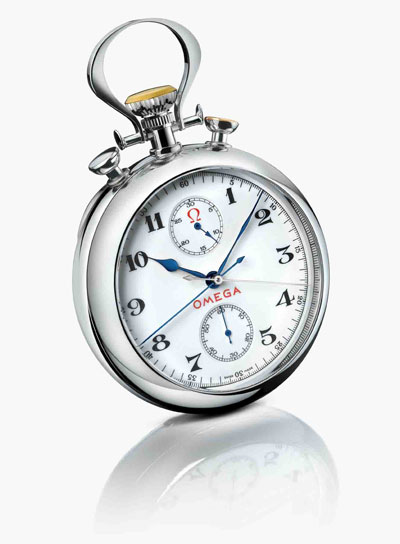 Omega is has created a 1932 pocket watch in honor of the Olympic games. Omega, as wel all know has, been the official timekeeper of the Olympics 22 times, including 2006 in Toronto. This watch is a single-button chronometer with blued hands and a sexy retro look that makes me squeal.

Entire release after the jump.


OMEGA has discovered a unique way to celebrate the value of great traditions in watchmaking and sports timekeeping. The first company ever called upon to time all events at an Olympic Games, OMEGA supplied 30 pocket watch chronographs for use at the 1932 Olympic Games in Los Angeles. The extremely precise, hand-crafted mechanical movements at the heart of the 1932 chronographs ensured that all competition results were recorded with state-of-the-art accuracy and reliability. OMEGA also sent along a fully-qualified watchmaker to make sure the chronographs were kept in perfect worng order throughout the Olympic Games. Since then, from 1932 in Los Angeles to the Torino 2006 Olympic Winter Games, OMEGA has been asked to serve as Official Timekeeper at 22 Olympic Games. To celebrate the historic relationship and OMEGA’s renewed role as Official Timekeeper of the Olympic Games, OMEGA has created the Limited Edition Pocket Watch 1932.

The OMEGA Pocket Watch 1932 project began with the extraordinary discovery of a number of unassembled chronograph movement kits, which had lain in storage for decades. The kits turned out to hold components for the very movement that had powered the OMEGA chronographs at the 1932 Olympic Games! The discovery sparked an ambitious and unusual undertaking: a plan to build a commemorative Pocket Watch 1932 using components recovered from the re-discovered assembly kits. Each kit comprised some 180 different parts and sub-assemblies, some of which proved to be in good condition, while others could no longer be used. All of the recovered components would have to be reconditioned, and a number of new tools would be required to assemble them. Clearly, the project represented an enormous challenge, yet the decision was never in doubt: OMEGA would produce an enhanced replica of the 1932 pocket watch chronograph. The new pocket watch would be based on the 1932 design, built using movements assembled from reconditioned and enhanced components, and completed with a small number of new components manufactured using contemporary watchmaking technologies. A search was begun through company archives for additional material that might prove helpful to the enterprise, and eventually even the original movement design drawings from the late 1920s turned up on microfilm!

The heart of the OMEGA Pocket Watch 1932 is the OMEGA calibre 3889A, a high-performance precision movement with an integrated rattrapante chronograph mechanism controlled by a double column wheel. The 24’’’ (53.7mm) movement beats at 36,000 alternations per hour, enabling accuracy to 1/10th of a second. All of the components recovered from the kits have been restored to immaculate condition. The gilt plates and bridges of the 1932 design have been reconditioned, rhodium-plated and enhanced with circular graining and Geneva waves. All steel components are satin-brushed, and the two column wheels are blued steel. The chronograph start, stop and re-set functions are integrated in the crown; beneath the crown is a safety-lock wheel to prevent involuntary stoppage of the chronograph (an essential feature for the official timekeepers at the Los Angeles 1932 Olympic Games!). The pushbutton at 11 o’clock controls the rattrapante function; the hours, minutes and seconds are set by holding down the 1 o’clock pushbutton and winding the crown.

The enormous care taken by OMEGA’s master watchmakers in restoring and assembling the recovered movement kits has allowed the Pocket Watch 1932 to achieve official COSC certification as a chronometer. The same precision and aesthetic sensibility evident in the numerous decorative enhancements to the movement has also led to other notable aesthetic enhancements. The chromium-plated metal cases of the 1932 model have been replaced by hand-crafted 18-carat yellow, white or red gold watchcases. Like the original edition, the contemporary OMEGA Pocket Watch 1932 features an exquisite 57mm enamel dial, crafted using a demanding process that has become a rarity in watchmaking today. The dial is white enamel with a recessed 30-minute totalizer at 12 o’clock and a recessed continuous seconds dial at 6 o’clock, both with black enamel “railroad track” rings. The black enamel Arabic numerals and 5-60 minute-scale, graduated to 1/5th second, and the red enamel OMEGA name and symbol are identical to those of the OMEGA chronographs used at the Olympic Games in 1932.
The hands of the 1932 edition have been reproduced using contemporary production technologies; the chronograph and 12 o’clock minute-counter hands are blue; the color of the split-seconds hand is yellow, white or red gold to match the case; the hour, minute and 6 o’clock continuous seconds hands are gold, coated in blue. The pendant protecting the crown takes the shape of the Greek letter OMEGA. Three different watchcases house the Limited Edition OMEGA Pocket Watch 1932; 100 yellow gold, 100 white gold and 100 red gold cases, representing the traditional gold, silver and bronze medals awarded to winning athletes at the Olympic Games. Similarly, on all three versions, the 11 o’clock pushbutton is capped with white gold, the 1 o’clock pushbutton with red gold, and the crown with yellow gold. The case back opens to reveal the movement, protected by a scratch-resistant sapphire crystal. Stamped on the case back is the official five-ring logo of the Olympic Games. The title Official Timekeeper of the Olympic Games and the words Limited Edition are engraved on the case back, along with the edition number of each piece: (001/100) for each of the yellow, white and red gold editions.

The OMEGA Pocket Watch 1932 tells an extraordinary story of art, emotion and technology. From the chance discovery of the 1932-design movement kits to the final assembly of 300 exquisitely finished works of art, the OMEGA Pocket Watch 1932 narrates the history of OMEGA and the Olympic Games. It tells the story of sports timekeeping from the day OMEGA first delivered 30 chronographs for the Olympic Games in Los Angeles to the company’s renewed role in 2006 as Official Timekeeper of the Olympic Games. From 1932 to the present, OMEGA has consistently delivered the most advanced sports measurement and timekeeping systems, always the key to the highly emotional moment when the medal winners—and the athletes’ winning times!—are officially announced. The Pocket Watch 1932 is also the story of OMEGA’s master artisans and their dedication to the fine art of mechanical watchmaking. Exquisite enhancements to the 1932 design make the contemporary Limited Edition OMEGA Pocket Watch 1932 a rare example of the best in mechanical watchmaking, combining fine Swiss craftsmanship with the most advanced of contemporary watchmaking technologies.

The choice of OMEGA to supply the most accurate, consistently precise and reliable timekeeping equipment was first made by the International Olympic Committee (IOC) in 1932. Seventy-four years later, the world’s top athletes will again look to OMEGA for precise, reliable and comprehensive competition results. OMEGA also serves as Official Timekeeper to the Paralympic Games, and will represent The Swatch Group as the designated Official Timekeeper at the Beijing 2008 Olympic Games and the Vancouver 2010 Olympic Winter Games.

Hands On With the New Breitling Super AVI