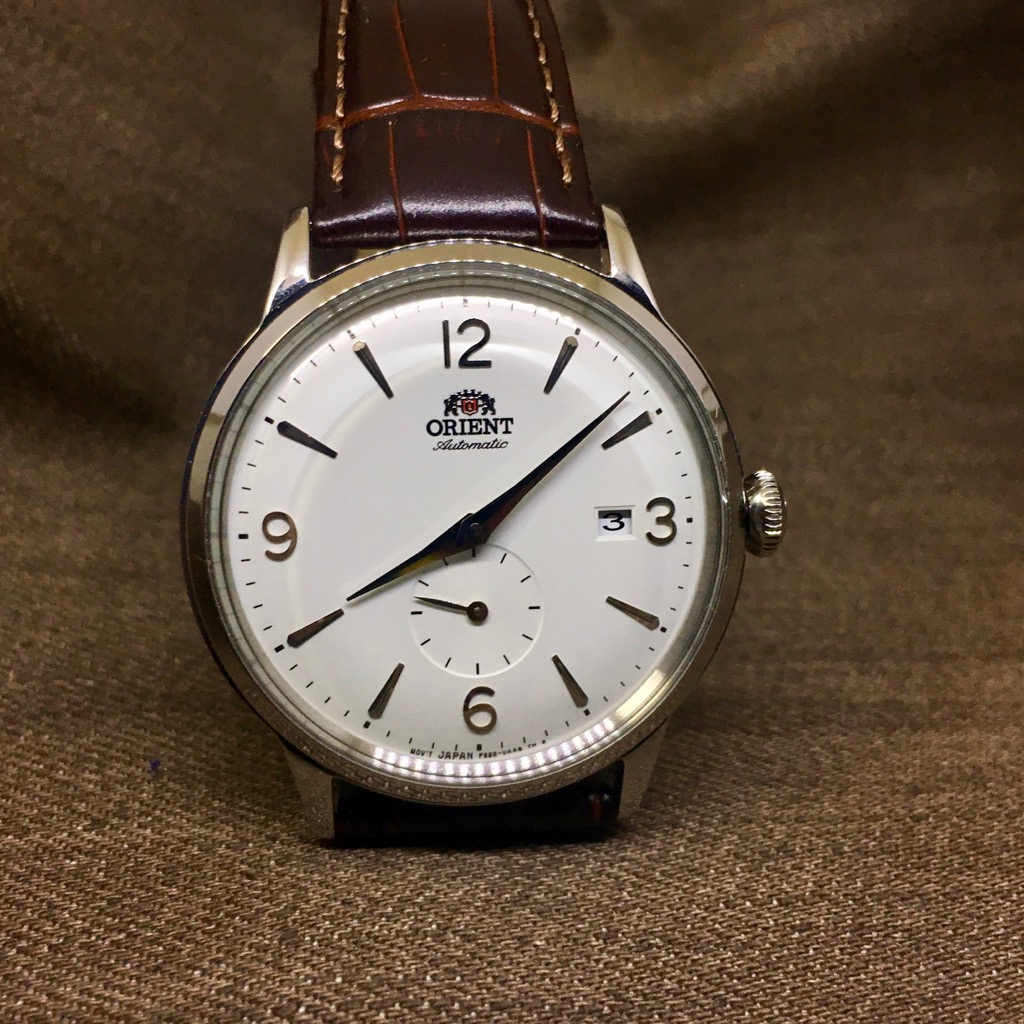 The Orient Bambino.  This is a watch many of you are no doubt familiar with, as it’s been quite a darling of the affordable segment.  Mechanical, good design – it’s easy to see why it would be popular.  While we’ve written about Orient here at WWR in the past, I’ve never actually seen one in person.  Which means I was always appreciating things from afar, or simply from the photos, which as we all know, doesn’t always tell the complete story.  Well, aside from our words and photos here, that is.  Regardless, with the latest release of the Orient Bambino SS, we (and I) get our first hands-on taste.

As it turns out,  the Orient Bambino SS was a great place to jump into the waters (not literally, though, as it only has a 30m WR rating).  Why is that, you ask?  Well, it’s because the Orient Bambino SS has a brand new movement, the F6222, which is based off of another movement in their collection. Why is this important?  Well, it’s because it brings some new things to the Bambino lineup, particularly hacking and hand winding, things we consider almost de rigeur for a modern automatic.  The modification also brings the small seconds to the party.

This really elevates the look of the Orient Bambino SS.  The Bambino line has always been praised as a vintage-look dress watch, but I think the move to a small sub-seconds (aka the SS part of the model name) really makes the design.  Which, for being a small thing, it’s surprising the impact.  I mean, the rest of the watch is basically the same – domed mineral crystal, domed dial, same case dimensions (40.5mm wide by 12mm thick).  Yet it’s those small details that seal the deal.  Along with the small seconds, I’m also happy to see the Arabic numerals and indices in place of Roman numerals.  Sure, Roman numerals may seem dressier, but I’d much rather do without them.

So, if you couldn’t tell, I was rather a fan of the Orient Bambino SS, from the first time I took it out of the box until I put it back in to send it on home.  The relatively thin profile – which, to the eye is thinner yet, as that height dimension includes the domed crystal) slips right under a cuff, and no one is the wiser.  Pop it on out, and those polished hands pop against the dial, you read the time at a glance, and you’re on the way.  The date window isn’t quite matched to the dial color, but it’s small enough that it’s not a distraction.

Speaking of distractions, I can’t quite make my mind up if the logo is one on the Orient Bambino SS.  As I pointed out in a prior AVI-8 review, when you have a vintage-style watch, it’s helpful if the rest of the dial (aka, all the extra printed bits) match in, thematically.  Here, that Orient logo and text are on the border between feeling period appropriate, and feeling too modern.  I wouldn’t mind seeing the brand play around with some logo variations out of their back catalog (presumably, they have some options given that the brand has been around for a bit).

Then again, these days they’re part of the Epson group.  What, the printer folks?  Sort of.  Flip the case over, and you see the Epson name right there, loud and proud.  What this really means, for us watch folks, is that Seiko (which is part of the Epson group) is taking a more transparent bit of ownership here (or at least, that’s how I’m reading it) in the brand.  I’m not a movement expert, so I can’t tell you if this new one is built with the reliability and longevity of your favorite Seiko caliber, but it’s nice to see the ownership being made a bit more clear.

Wearing the Orient Bambino SS was a treat.  I wore it both to the office, as well as with a suit, and it didn’t break a sweat.  Sure, it might look out of place a bit on the weekend if you’re dressed really casually, but otherwise, something like this could be a good, dressier everyday alternative (perhaps the black dial variant would be a bit more under the radar; if you want to stand out, there are some gold tone options as well).  And hey, at an asking price of $305, even if the watch is an every-other-day sort of a watch, you’re still coming out ahead in the bargain, if you ask me.  So, if you’re on the hunt for a vintage-look dress watch, these new Orient Bambino SS models should be one of your first stops to check out.  orientwatchusa.com

Another assist from my daughter