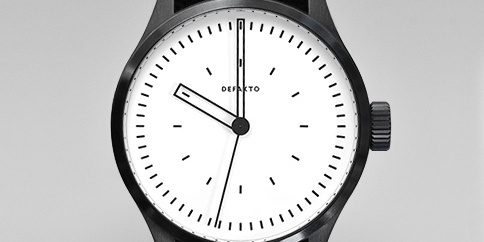 We are always on the lookout for new and interesting watches to bring to your attention, and while we have not written about many Defakto watches previously, one of their latest well and truly caught my eye. The Defakto Kinetik may be just a simple three-hander, but you will no doubt see that it is unlike any other you may have thought about putting on to your wrist. On the Defakto Kinetik, the big selling point is the handset. While they all manage to carry the same lineweight, they are recognizable and distinguishable. What really sold me on the idea of the watch was when I saw the image (just above) of all three hands aligned. It makes for a sort of stylized skyscraper look, but there is an itch that gets scratched in my mind when I see all those aligned lines. Of course, that sort of juxtaposition is only going to occur but once per hour, and for a second, so the look will be fleeting. No matter – for the rest of the day, the Defakto Kinetik is still a sharp-looking watch. There will be no doubt about the time it is indicating, either, as the outlined hands completely enclose the indice that it points at. Aside from being practical, it is a design choice that was made. Yes, watches have been pointing to their respective “tracks” for a long time, but how it’s done is often a matter of consideration. For all the nitpicking we do about handsets, the Defakto Kinetik is an example of how it can be done, and done well. The dial and handset of the Defakto Kinetik are packed into a 39mm case (Ickler design, of course) which lends its protection to the ETA-2824-2 movement inside. The three-piece case (which is topped by a sapphire crystal) picks up the same matte finish that is present on the other elements of the dial, which lends a great continuity to the look. Should you want to change things up a little bit more, you could instead opt for a plain stainless steel case, or go for a black dial (which then has a white handset and indices). That last dial – the black with white accents – I think is the most visually impactful of the four variants you can pick up. Regardless of the selection, you can pick up your own Defakto Kinetik for $635 (or (€665 for those within the EU paying VAT). Whatever your choice, you will have a watch that many will take notice of. defakto-uhren.de 2 thoughts on “Outlining the Defakto Kinetik”