The Russians are Here, with Poljot Watches on Touch of Modern 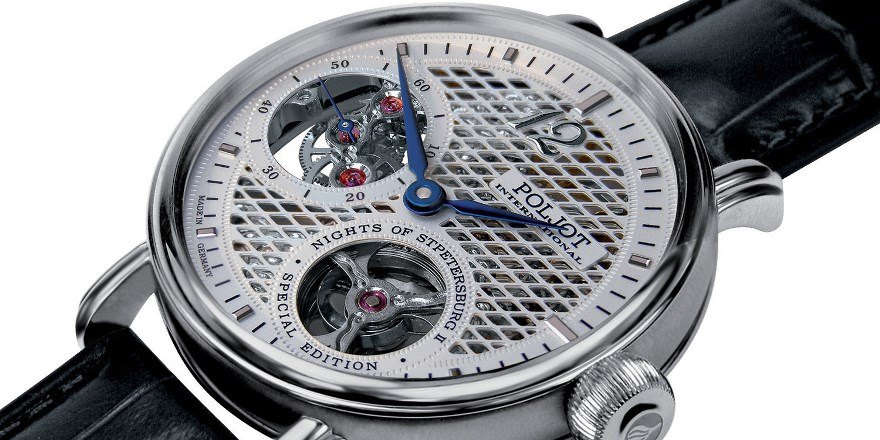 I don’t recall where I read the advice, but one of the other blogs out there once wrote that you really need to have a Russian timepiece in your collection.  After all, they are infrequently encountered, but not rare in the sense that they are unaffordable.  My favorite sale-of-the-moment site, Touch of Modern (join through this link if you are not already a member), has a sale going on for Poljot Watches, with a selection of automatics and even an affordable tourbillon (above). Now, the watches are currently made in Germany, so that takes a little cache out of the Russian moniker, but they do use Slava automatic movements, which are also used in the CCCP watch Patrick reviewed.  There are three watches at the lowest price point of $329, the most attractive of which, in my opinion, is the Red October 2, a 45mm diameter diver watch with a 100 meter depth rating.  There are also two pilot automatics for $329, and the Pioneer Automatic, which looks like it has an internal rotating bezel. Another entry level automatic is the International Automatic, in white or black.  At $349.99, the watch has a day date complication in an dress watch package with a double barrel Slava automatic movement.  The onion dome logo will definitely set this as a Eastern Bloc watch. There are also two types of skeleton watches available, the more ornate gold International Nicoli II (above) or the Nights of Saint Petersburg in stainless (banner image) or gold.  My preference is the stainless version of the Nights of Saint Petersburg, with the white mesh dial.  This skeletonization shows off enough of the movement, without sacrificing readability.  The blued hands of the Nicoli II with the white chapter ring is also readable, but the more ornate style and the gold case is not my cup of tea.  The watches run from $429.99 for the stainless to $499.99 for the gold. Last, but certainly not least, is the International Tourbillon, with white, cream, white mother of pearl or blue mother of pearl (I think) dials. The watches feature a power indicator and day/night dial, as well as the open tourbillon second hand.  Obviously not as highly finished as the finer tourbillons, and without the multi-axis gimbals we drool over, it also comes in at a (relatively) affordable $1,899 to $1,949.99.  So if any of there intrigue you, check out the sale, which ends on March 31 and noon Pacific.  If you are not a member, click through here and join.