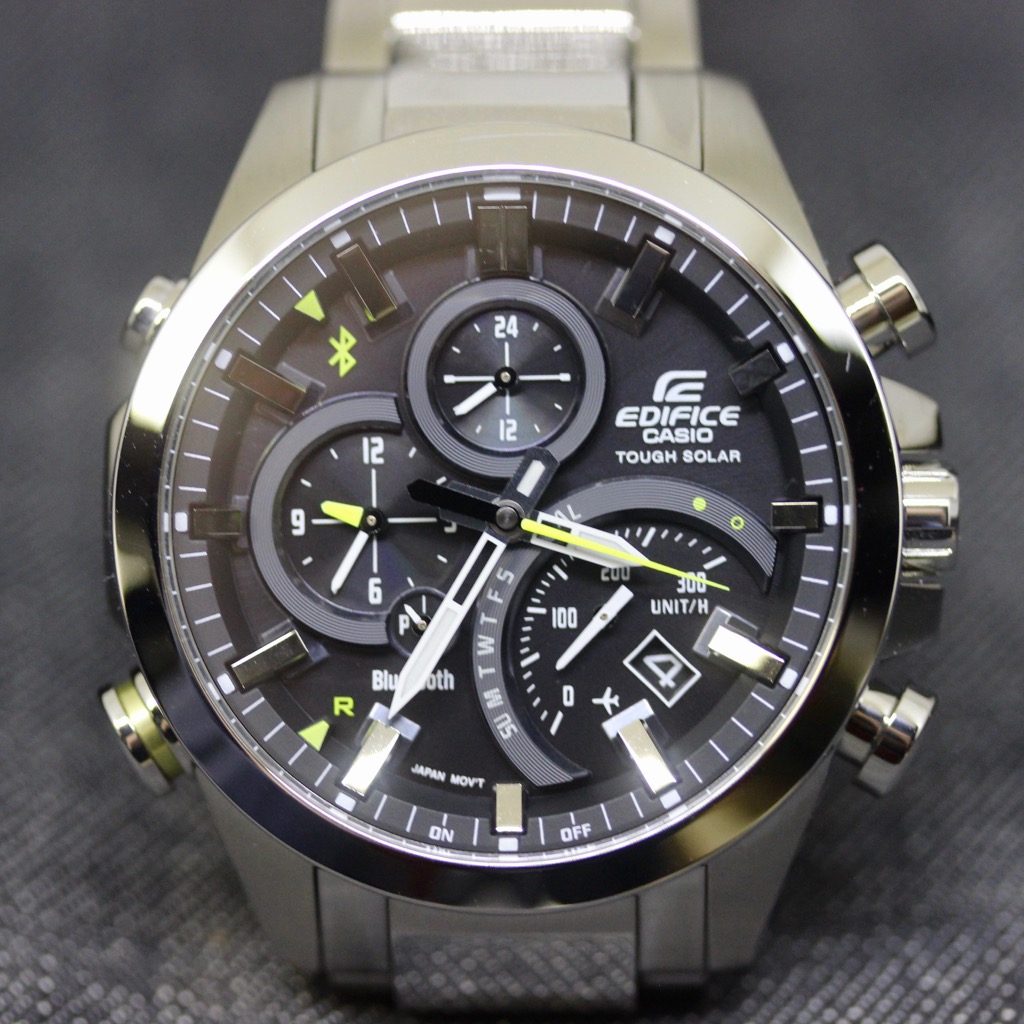 I have long had a fascination with solar-powered watches.  As a matter of fact, one of the first watches I bought for myself as an adult was a solar powered (and atomic-clock syncing) one from, you guessed it, Casio.  Even though that was about a decade ago, they’re still making those solar powered watches (funnily enough, I just listened to a podcast from Two Broke Watch Snobs about solar watches just today).  Let’s see what’s happened in the intervening decade with a look at the Casio Edifice EQB501D-1A.

So, let’s start with one thing – for the remainder of this article, I’m just going to call it the Casio Edifice, because that model name is not one that rolls off of the tongue, now is it?  That out of the way, let’s get to the review.  For starters, why would you even want a solar-powered watch?  Well, for one, you’ve got battery longevity.  The one I personally own, I’ve had that for about 10 years, and it’s still on the original battery.  Additionally, solar powered gets this watch firmly into the realm of things that a mechanical watch can’t do, which is a good spot for a quartz.

When you add in that the Casio Edifice also has Bluetooth, so it can lash up to your watch?  Well, yeah, you’ve got some tech under the hood.  Which would explain why this watch is as thick as it is, because the radio, the solar cells, and all that’s required for the functionality of the watch.  Speaking of, here’s a quick rundown of all the watch can do:

This is a lot going on, of course.  And, if I had one complaint against the Casio Edifice, is that there is a lot going on, and it can be tricky to manage via an analog dial.  In fact, for the longest time, with my own Casio, I had a wallet-sized cheat sheet that I carried around just to be able to tell how to switch between functions, and know where I was in the roster of capabilities.

Fortunately, that is ameliorated with the app you use to pair your phone to the Casio Edifice.  As shown above (and in the gallery below) the app can tell you what it is you’re doing on the watch.  And, actually, you can set quite a few different things (home time, travel time, alarm) on the app as well – so you may not even need to fiddle with the watch a whole lot.

Then again, we wouldn’t be watch folks if we didn’t fiddle around with the watches, now would we?  And in that regard, you’ve got plenty to play around with.  You’ve got four pushers that drive various functions (the one you’ll interact with the most is over at 8 o’clock, and that wakes up the pairing to your phone).  Just don’t try to move that crown, as it’s vestigial.  As in, it serves no purpose, and is locked in place.

There’s also plenty on the watch that plays with the light.  You’ve got polished surfaces galore (which does mean fingerprints, of course).  One of the best comes in the form of the bracelet.  With how Casio designed this bracelet, it almost looks like you’ve got two bracelets, one stacked on top of the other.  It’s a neat look, and it’s the single feature that attracted the most comments.

Then again, a shiny bracelet probably isn’t the only reason you’re going to the market to look for something like the Casio Edifice. Short of any very specific fitness or outdoors needs, this is a watch that will cover off on most of the bases for many folks.  With the high polish across the surfaces, this also means it’s a watch that fits into a dressier setting, which some of the things like the G-Shock and Pathfinder lines (which have similar capabilities) certainly wouldn’t.

With pricing for the Casio Edifice coming in at $300, you’ve got a whole lot of watch coming in for a rather reasonable price, in my book.  Sure, there’s no atomic clock or GPS time syncing, but it does lash to your phone – which would be pulling very accurate times.  So, yeah, I think this is a great option for someone who wants more than “just another” quartz watch, and appreciates some of the technical wizardry that goes in packing in solar and Bluetooth, as well as all of the other movement capabilities.  Or, frankly, even if you don’t care about that, but would like some help from your phone to manage a more complicated watch, this Casio Edifice has you covered.

What about those who are interested in a watch like the Casio Edifice, but don’t see it as daily wear?  Well, then, don’t worry, because the Casio solar tech has you covered as well.  Once it realizes it’s not getting light, it drops into a low-power mode.  At first, this just stops the running seconds, and the main time will keep going.  Eventually (I’m presuming here based on my other Casio solar) it will completely stop the hands, while still keeping time.  Then, once some light hits it, it springs back to life, and it’s ready for action.

For me, that’s really where watches like the Casio Edifice shine – with quartz and solar, they’re low maintenance, put them on when you want to, sorts of companions.  Adding the Bluetooth sync to the phone just sweetens the pot, giving quick time resets, as well as the integrated guides for how to operate this wunderkind.  So, yeah, I liked it, and I think this is a good use of some “smart” capabilities.  But, just don’t take my word for it.  Let us know below, or over in our Slack channel, what you think of the Casio Edifice – I’m curious to hear what others think.  casio.com