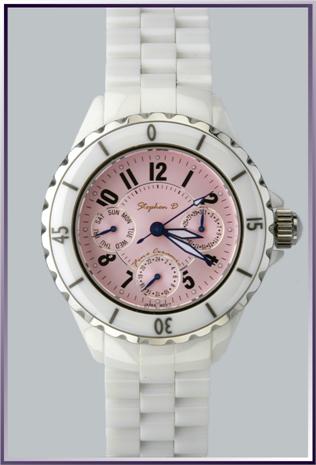 I have nothing but respect for competent, innovative marketing tactics. But when marketers fail to their homework and are clumsy with an unconventional approach, I will be first in line to call the ugly baby ugly.

Stephen D Time tried a clumsy attempt at guerrilla marketing on Amazon.com. A shill entered into the discussion groups spouting the merits of Stephen D watches in a forum inhabited by a number of watch nerds, including yours truly. Rather than rant and flame, I tried to be open and look at the merits of the watch.

I erroneously had the impression that they used a Swiss movement in all their models but as I double checked myself, this is not the case. They put a Seiko quartz movement in most (a movement Seiko doesn’t put in their own watches, as far as I could tell), and save the Ronda quartz movement for the “select” editions. This was the closest thing to a merit I could find, and then it went downhill.

The overall styling is a thinly veiled homage to Chanel watches, which in turn are overpriced homage to Blancpain… An homage of an homage; isn’t someone going to go blind like that?

Stephen D is using a historically successful but lame business strategy. Sadly, we can expect to see this pattern reappear, as it is a way to turn a quick buck.

But if you’re going to attempt an “out of the box” approach to marketing; research your methodology and target audience, don’t just throw it out there and hope.

Surprise! The Hamilton Watch from Far Cry 6 Will Get a...

The HourTime Show Asks, How Much for Breitling?