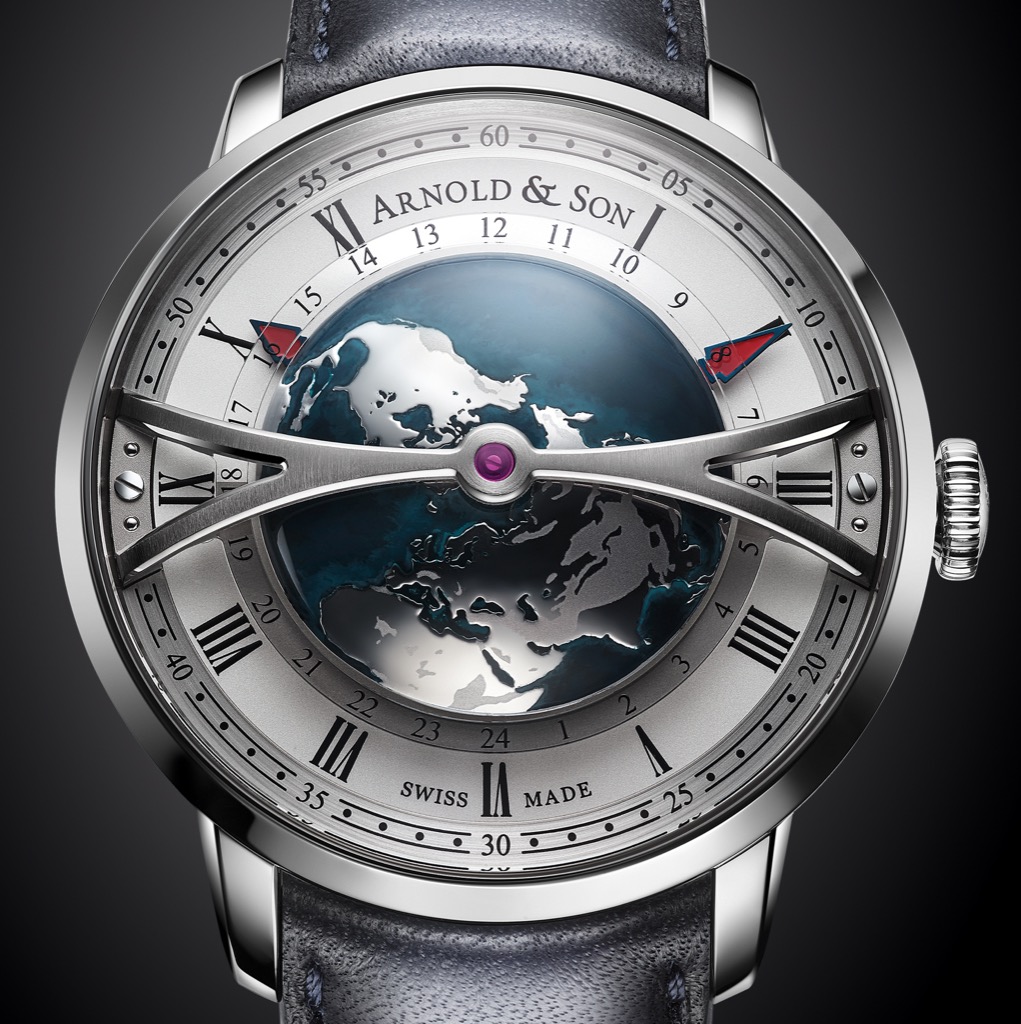 Over the past few years, I’ve been paying attention to what Arnold & Son have been creating.  The pieces they’ve announced are generally well-sorted, and there have been some rather interesting technical bits of uniqueness as well.  While I would not have minded going hands-on with any of them, there haven’t been any that I really felt I wanted to, other than the Time Pyramid.  Well, I’ve got another one to add to the list, the just-announced Arnold & Son Globetrotter.

If it was not obvious from the name of the watch, or the large representation of the northern hemisphere taking up a majority of the 45mm case, the Arnold & Son Globetrotter is a GMT watch (aka, the best of complications after time and date).  What they’ve done here, of course, is gone with an artistic, yet still realistic, depiction of the globe.  We see this on only a few other watches (Gruebel Forsey comes to mind) to this sort of detail.  Sure, other brand have printed maps on dials.  But bending a piece of brass, followed by etching and polishing to get the 3D look?  Now we’re in some rarefied air.

Of course, a depiction of a globe does not a GMT watch make.  No, for that, you need a few more things.  Here, a sapphire disk is mounted on to the same bridge that arcs over the globe, where you’ve got the 24-hour scale printed (along with a day/night indication via a translucent metallic finish applied between 18:00 and 6:00).  The other thing you need is a movement that can count out the 24 hours.  Here, that’s accomplished by the A&S6022 movement, which is as superbly finished as we’ve seen on other ones from the brand, and manages to control setting all of the elements via a single three-position crown.

While world time is certainly the focus of the Arnold & Son Globetrotter, you still need to know your local time, right?  Here, they’ve mounted the blued-steel hands (filled with red lacquer, to stand out between the blue globe and silver dial) so they just peek out from under the earth.  In short, it keeps things quite well legible (well, I’m guessing trying to read the time at an angle might be tricky) while maintaining the focus on the art and architecture.

And yeah, there’s definitely some architecture to the Arnold & Son Globetrotter.  For starters, you’ve got that large bridge arching over the globe, which makes it another focal point for the watch.  To get all of that mounted in there, there’s a fairly heavily-domed crystal as well (the likes of which we’re more used to on dive watches).  To illustrate, the watch itself is only 10.4mm thick – until you include the crystal.  It’s at that point, then, that the spec height of 17.2mm is revealed.  Pair that with the 45mm case diameter, and this is no dainty watch, for sure.  Here, though, it’s large for the sake of accomplishing some cool stuff (and not just for the sake of making a big watch).

I will say, I was mightily surprised (in a good way) when the Arnold & Son Globetrotter was announced, just based on the looks of the thing alone.  It was with some trepidation that I inquired after the pricing, and again, another pleasant surprise.  Now, I’m not going to try and kid you, the Arnold & Son Globetrotter is very firmly in the realm of small-make luxury.  That said, the $16,995 price tag was a good deal less than I was expecting it to be.  I know its easy to give the medal to the last thing you saw, but this watch easily takes the place as my favorite watch from Arnold & Son, and certainly is one of my favorite new releases of the year.  arnoldandson.com