Taking A Look At The Upgraded Smith & Bradley Atlantis 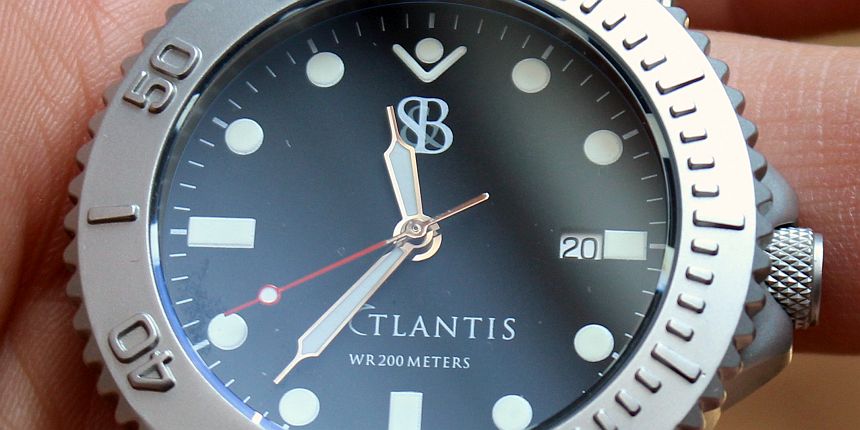 The last time we took a look at the Smith & Bradley Atlantis, we were spending time with the model that launched on Kickstarter. At the time we were looking at it, we were made aware of changes that were in the works for the production (ie, non-Kickstarter) version of the watch. Today, we will run through some of the changes and upgrades made to the Smith & Bradley Atlantis.

Perhaps the most striking difference of this new version is the overall finish. The stainless steel case, bezel, and bracelet (which is also new for this version) have been bead blasted, which gives the metal a softer look to it. This means that the 44mm case, which is still beefy, actually has a bit more of a subtle presence on the wrist, as you do not have light reflecting off of it. Another extremely nice benefit of the bead blasting is the fact that it really does not show fingerprints. The next noticeable change was actually just mentioned – the bezel. In the early versions of the Smith & Bradley Atlantis, the bezel was a more traditional-looking bezel, with recessed and painted numerals. On this new version, it is actually more of an embossed look, with raised numerals and markings. While this is largely impractical for someone who actually is a diver, it works just fine for us desk divers. It also allows the bezel to sort of fade into the background unless you are using it.

Past that, there are not a lot of visual changes that were made. The dial layout and handset are unchanged; there are some new dial color options (white navy blue, and orange are in the mix, alongside the black dial we reviewed here). The remainder of the changes are a bit more subtle (such as updated knurling on the crown), or even unnoticeable (such as an improved 3 o-ring system under the crown for water resistance).

Perhaps the biggest change that you cannot see is with the movement. The original Atlantis that we reviewed relied on a Seagull ST2130 automatic movement. Decent in its own right, it kept things to an affordable price point. The gents behind Smith & Bradley (Jerommie Smith and Ryan Bradley) felt that there was room for improvement though. They wanted a movement that fit with the commitment to quality they have built in to the brand, and as such, the Smith & Bradley Atlantis is now available with an ETA 2824 movement.

This does, of course, raise the price up a good bit (more on that later), but it is an understandable move. The 2824 is very much a known quantity, and I think does fit with the image of quality they are building up (again, refer to our prior review on how they are achieving that). That said, there is a part of me that wishes they did still offer a Seagull option, for those who like the style but would prefer a more affordable price point (again, we’ll cover that in a bit). In terms of wearing the new version around, it was just like the original – a good fit to the wrist, and wears a touch smaller than other, similarly sized, divers. As it is steel (plus the new bracelet), this is not a lightest piece in the world, but it is something that you easily get used to. I did appreciate the bead blasted finish, as it does make the watch a bit more subtle, and I think works quite well for casual or business casual sorts of scenarios.

Sure, I do still wish that the handset style was changed up a bit (those needle tips make the hands look smaller than they actually are), but my original impressions remain unchanged – this is a very nicely built “compact” dive watch. Of course, it doesn’t hurt that the Smith & Bradley Atlantis is built not all that far from me, so you of course have the “Made In The USA” appeal there as well. For this new Smith & Bradley Atlantis, you can pick up the 2824-driven model for a price of $1,395, with either a white or navy blue dial. For those looking for a lower price point, they do offer a ISA Swiss quartz-driven model for $650 (white or black dial). Last, but not least, if you would like a PVD finish, you can pick that up in quartz as well, for a price of $700 (with an orange or white dial).

While prices have definitely gone up from the Kickstarter launch of the Smith & Bradley Atlantis, there have been commensurate increases in what is actually being offered – and I can only imagine the confidence in the build process, which means higher quality and reliability. Having chatted with both of the owners, and sampling a variety of their wares (and some unreleased stuff in the works), I can say that if you are a fan of the styling, you should not have any reservations about picking one up. smithbradleyltd.com