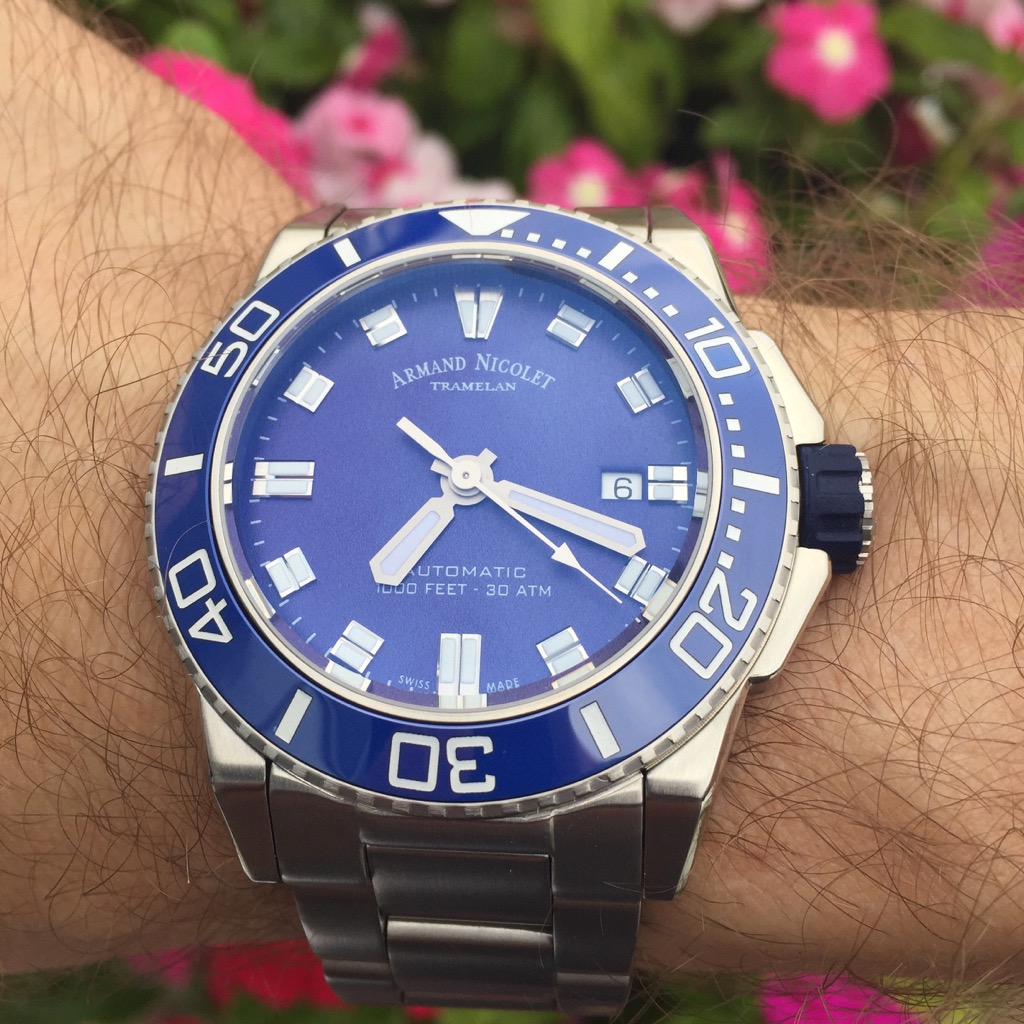 Armand Nicolet is a Swiss company you might not have heard about, but one you should know. They do things a bit differently in Tramelan. It’s time to answer the question, what do you get with a large thin dive watch that has more in common with a Royal Oak than a Submariner? This is the JS9, powered by the Calibre AN2846-9. Its a beautiful blue dial wrapped in 316L stainless steel capped with the blue ceramic turning bezel.

Let’s get this part out of the way. Why would I compare Armand Nicolet’s JS9 with a Royal Oak or Patek? It comes down to the mid-case shape and lugs. The side profile of the case and lugs are completely flat under the bezel, with sharp edge lugs that angle down to the bracelet.

I also mentioned that it’s a rather large, thin watch. When I put it on my wrist, conversations I had went a little like this:

And they are. The case is 44mm wide, and 13mm tall. If you like a big crown, this one is the biggest. The crown is not only large at 8mm, it’s wrapped in a synthetic cover for most of its body, giving an even larger gripping surface.

The bezel is short and is at a steeper angle up to the crystal than some other popular dive watches whose name begins with ‘R’. The sapphire crystal also has an angled edge, and looks just fine sitting atop the the bezel’s blue ceramic ascent.

The bracelet is well-made, and does not grab or pull hair. Its end links are solid, but rather than be a combined end and middle link to the rest of the bracelet, they have an articulated middle link, like Tudor, or like the bracelets of old with hollow links had. It’s a cleaner look for those who don’t like a middle link to stand proud of the wrist. Instead, the bracelet lies flat against the wrist as it descends gracefully from the lugs of the watch. I have one complaint about the bracelet, and a separate one about the end links. The bracelet is what some people call a suicide link: The links are not held together with a single screw. Instead, they use a screw from one side, a socket that the screw threads into from the other. This requires two screwdrivers, one from each side, to remove or re-attach a link. The issue is that trying to keep two screwdrivers straight, while in their tiny slots can be difficult. If one slips out, it’s liable to scratch the side of the bracelet or stab your other hand. The good news is that once it’s adjusted, it’s very comfortable. Regarding the end links: The lugs have beveled ends, and the end link does not, so there’s a bit of a jarring contrast where the end link doesn’t have the same profile as the lug. The bracelet uses a very nicely done butterfly deployant clasp, in line with the decision that this is more sport than dive. But it does have real dive chops, being resistant to 1000 feet / 330 meters.

The beveled end of the lugs is a continuation of the beveled top surface of the case, which is beveled all the way around on the crown guard side of the watch, but due to the way that the bezel is slightly recessed in the case between the lugs, the bevel disappears when the bezel meets the case edge on the non-crown side. It works well.

The indices on the dial are very much worth discussing. Instead of the normal dots and bars lume plots or lume filled in forged applied indices in the familiar circles and bars, these are diamond cut and polished indices, bars, that are arranged in pairs of horizontal aligned bars ringing the dial, with vertical pairs of bars at 6 and 12. The result is serious bling catching the light.

The movement is a Swiss caliber that’s been given Armand Nicolet’s own name, a Calibre AN2846-9. This is actually an ETA 2846 updated and decorated in Armand Nicolet’s factory. Even though it lives encased in the stainless steel back, not visible to the eye, it’s a nice, reliable movement.

There’s a lot to like here. A Swiss diver, ceramic bezel, diamond cut hands and indices, with a huge crown and thin case. Honestly, I like it a lot, and it’s not an imitator of much of anything. I love that they made a dive watch and eschewed the usual, the normal dive watch recipe. This is a watch to be proud of. If you’d like to wear one, too, 1700 CHF gets you into the club.