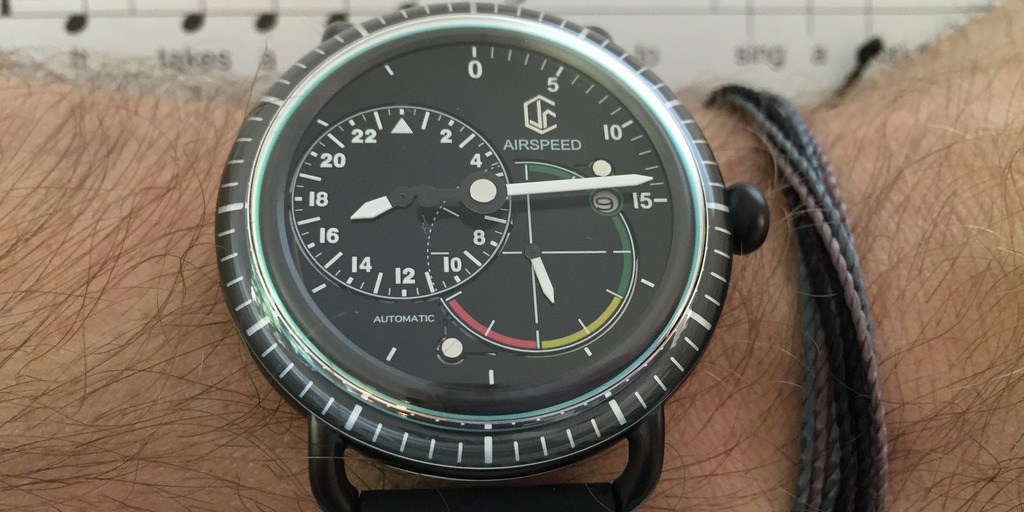 The CJR Airspeed Regulator watch launched on Kickstarter a short while ago, and so far, has raised over $118,000. It’s powered by a Miyota 9015 movement. It’s  got a really nice leather strap, sewn with cotton thread. I could tell you all these things, but none of that would tell you how cool a watch this is.

Start with the simple. The regulator clock was invented so that watchmakers would have an accurate clock to regulate, or set the speed of, the watches they were making. The regulator clocks separated out the hour, minute, and second hands. The dials were all in a row, so that the hands lined up at 12, and would make it easy for the watchmaker to adjust the newly-built watch to match the clock.

The CJR Airspeed Regulator is interesting. It’s not set up for the hands to align like the regulator clock of old. It places the minute hand in the center of the dial, seconds in a subdial at the 4 o’clock position, and hours in a 24 hour subdial at the 9 o’clock spot. This presents you, the wearer, with two difficulties. One, you have to read a 24 hour dial, and two, don’t attempt to set the time when it’s 6 am. The hour hand will be pointing somewhere around the center canon pinion that holds the minute hand. But these are minor details in the scheme of things. First of all, it isn’t too difficult to learn to read the time like this. The rounded hesalite crystals on both front and back surround the movement, are very comfortable, and make it look similar to the much more expensive Ressence watches.

The Airspeed Regulator is available in two colorways. The more classic look has a brown leather strap, cream dial, silver hands, and a red accent ring that surrounds the movement, and is visible from the side. It’s really nice, visually, to see the rounded domes and the red accent ring. The case and crown are polished stainless steel. There are two screws on the face, at the border of the seconds subdial, and a white date disc that stands out from the cream face just a little. The outer minute track benefits from the curvature of the crystal, and is rendered in silver. It’s a nice look. The black Airspeed Regulator has lumed hands, a black dial, black case and crown, and black minute track. How much more black could it be, as the quote goes? Well, some. There’s precious little writing on the dial. You get a CJR emblem, AIRSPEED, and AUTOMATIC. That’s it. On the display back, you can see the movement holder engraved with STAINLESS STEEL, the watch model number, AIRSPEED BY CJR, and that it’s water resistant to 3 ATM. The hands are lumed with white appearance in the daytime, the markers are white, and instead of red accents, the ring around the movement is in a sort of sea-foam green color. It’s a very interesting color combination, and one I found very appealing. Of the two watches, I thought I’d like the cream dial more, but in daily wear? I prefer the black watch. If you’re looking to see exactly what minute it is, you have to make the huge distance leap from the end of the hand to the outer minute ring at the periphery of the case. A regulator is classically something you can set other timepieces by, and here it’s visually difficult to do that, because it’s difficult to read any minute after 15. The water resistance is only to 3 ATM. This is not a swimming watch, this is not a showering watch. This is a watch that is safe to wash your hands while wearing, and that’s about it. That’s OK – you didn’t really want to swim with a leather strap anyway.

The Airspeed is available on Kickstarter (project page) with pledges as low as $329. For the money, you get a unique watch that’s comfortable to wear, nice to look at, and is a solid performer. Really, it’s hard to beat. cjrwatches.com