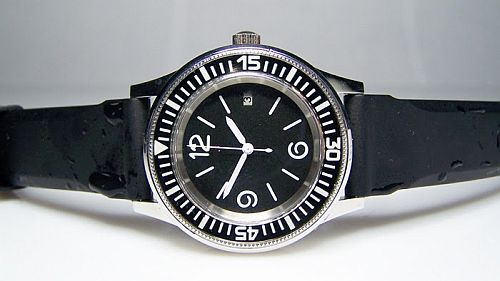 While I don’t write on this class of watches all that much, I do love running across a watch brand that breathes new life into an older movement that might otherwise be headed for the bin. Then again, if you run across an signed (but older) Blancpain movement, odds are that it’s going to get used in some form. That’s exactly what TNT has done with their Seahunter1 Combat Diver.

For this particular watch, they somehow ran across an AS 2063 movement (twelve of them, actually) that Blanpain used in the 1970s for the Fifty Fathoms. What makes this one all the bit more unique is that it’s signed as a Blancpain movement. So, what do you create when you have a movement of this vintage and pedigree? Well, a Fifty Fathoms homage, of course. The movement is wrapped in a 42.5mm case that has similar lines to the FF, and topped with what can best be described as a Panerai-inspired sandwich dial. The dial itself is topped with a sapphire crystal (bringing the overall height to around 15mm), and surrounded by a rotating bezel. While I can’t tell for certain from the pictures, it does’n’t look like we’ve got a sapphire-topped bezel (or at least acrylic), which likely means no lume either.

With it’s crisp black and white palette, this is a very easy-to-read watch, no doubt about it. That said, this is, ultimately, a watch I pretty torn about. On one hand, you do have a nice bit of history tucked away in the case, courtesy of the movement. The watch itself, though, looks like a combination of other homages that really doesn’t necessarily stand out from the crowd, at least in my book. Coming in at a price of around $814, it’s not exactly an impulse buy, either. I guess I’ll leave it up to you if the lineage of that movement makes the watch a worthwhile purchase. torsten-nagengast.de