World Time On The Wrist With The Butler Professional Series GMT 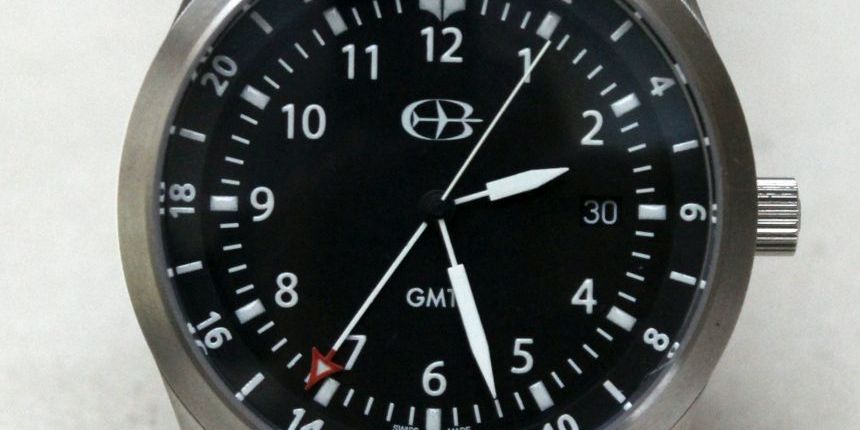 When it comes to watches, I have honed my own personal preferences down over the last few years. When it comes to case sizing, I tend to prefer something that falls under 44mm; when we are talking about complications, a GMT hand has become one of my favorites. The combination of those two items really is not a rare thing, but it is nice when they come together in a clean, legible package. That is exactly what we have in today’s review of the Butler Professional Series GMT. Now, if you are going to label something “Professional Series”, you had better have a good reason. As it turns out, Corey Butler does indeed have a good reason for this. For starters, this watch was designed with pilots in mind (Butler himself is a pilot). To that end, the dial does not have anything extraneous showing up on it. The handset sizing is done in such a way that the tips of the hands point to the appropriate indice (apparently, this is how aviation gauges are laid out as well). To cleanly delineate the GMT scale, the chapter ring is raised up. And, of course, the inclusion of a GMT complication is a useful tool for a pilot, as much of what they do (that relates to time) is in reference to GMT (or, more precisely, UTC time). Another consideration for the professional pilot? Well, that shows up in the movement. Butler chose a quartz movement, the Swiss Made Ronda Powertech Caliber 515.24h. Swiss-made for the quality that is generally implied, and quartz for the reliability and accuracy that quartz movements offer. As Butler himself notes, quartz movements may not be as sexy as mechanicals, but dependability and accuracy are critical. Additionally, it allows for a lower price point, which again is a valid criteria when selecting a tool to use. What this means for us, the non-pilot types, is that you have a very cleanly styled watch that sits lightly (it’s only 68g, another benefit of quartz movements) on the wrist. Some may consider the 40mm (12mm thick) watch to be on the small side – and it is, by modern standards. For my tastes though, it’s right on the lower edge of what I consider to be a good fit for my own wrist. It keeps the watch compact, while still allowing for a legible dial (of course, the white/black contrast also assists in this regard). The included strap and buckle are fairly vanilla, but they work just fine, with a matte finish that works well with the brushed finish of the case. Of course, should you want to swap it out, the 20mm lugs will be plenty versatile. In some ways, you could almost apply that label to the whole watch – vanilla. Some might call that boring, but I have come to realize there is a great enjoyment to be derived from vanilla (both in terms of the flavor, and using it as a descriptor), if you are willing to look for it. When applied to the Butler Professional Series GMT, vanilla means a watch that is serviceable in every aspect, and way that it is meant to be used. You very quickly have at-a-glance readability of the time and GMT time, with the high-contrast dial and decent lume. The matte finishes on the case and strap means it is not a flashy watch, but there is good reason for that. Pilots do not need any extra glare in the cockpit, so those finishes (plus the AR coating on the sapphire crystal) are of great benefit. For the casual wearer, that means you have a watch that can fly under the radar.

Vanilla also means that, while this is an aviator’s watch, there are none of the regular styling cues we are used to seeing with a Pilot or Flieger watch. As a matter of fact, you will not see anything that is particularly plane-oriented, short of the Butler logo on the dial. Even without those, it is not like this is a boring watch. You have the previously mentioned raised chapter ring giving us some dimensionality, as does the applied lume on the indices. The handset is another example of the complexity vanilla can bring. Yes, they are reminiscent of what you see on any other pilot watch, but they are different in their own right. They are slimmer than we would normally see (in keeping with the overall dimensions of the watch; more on that in a bit), and the hands have a cutout that runs up from the pinion – another cue I have not seen before. These are the sort of details that the casual observer would probably overlook, but are picked up by the eye once you know to look for them.

In terms of wearability, the Butler Professional Series GMT was just about spot on for my wrist. The lug-to-lug did not cause any overhang, the strap conformed well to the wrist, and the overall compactness and lightness of the piece meant that it was a watch you could almost forget you were wearing, until it was time to, well, check the time. I found that strikingly easy to do at a glance, and the date window was not a distraction either, given it was color matched to the dial. I have maintained that quartz watches do indeed have a place in our collections, generally when they can do something that a mechanical cannot easily do. With this review, I think I am going to amend that position a little bit. I am not quite sure how to put words to it, but it’s like they say about obscenity – I know it when I see it. In this case, the Butler Professional Series GMT fits that criteria. For my own tastes and preferences, it just plain works.

Looking at the watch with an objective eye, yes, there are some tweaks one might desire. For example, some changes to the handset to make the difference between the hour and minute hands more obvious could be helpful. You might also be looking for an upgrade in the strap, or perhaps even the option for a bracelet. Past all of that, I think Butler met what he set out to do – create a simple, elegant, and utilitarian design. Of course, I am not a pilot, but the piece works just as well in the office, and I can only assume while traveling. I do have one aside, before we wrap things up, regarding the model numbers that Butler has assigned to his watches. In short, they are another hidden reference to aviation that only people who are pilots would normally pick up on. Well, and now you as well, dear reader, since we’re telling you the information. Our particular review sample has a reference number of B762.12 – pay attention to that first part. Here is what Butler had to say about it:

Our serial numbers use the aircraft type as a prefix; “B762” is a code for Boeing 767-200 series aircraft. All of our watch models will carry a unique prefix to their serial numbers. The Mc Donnell Douglas DC-8 and Boeing 767 happen to be the first two jets I flew in my career, so they received the nod on the first two models, with different model series differentiating the SS or DLC.

So, as you can see, it’s a clever little nod that both speaks to the intent of the watches, as well as the background of the fellow who’s name is on the watch on your wrist.

In the end, the Butler Professional Series GMT is a great (and affordable) watch designed to a specific set of criteria, creating a pilot’s watch that is a bit different from what we have come to expect from that genre. As to the affordable part, you can pick your own up for a price of $449, or opt for the PVD variant, which bumps the price up to $479. While the presence of the Swiss-made quartz movement might turn some people off, I think there is definitely a place for them. For a traveling companion (especially if you tend to travel with more than one watch), I think the Butler Professional Series GMT makes a compelling argument to be on your wrist. butlerwatch.com