Anstead Oceanis – A second try at their premier watch 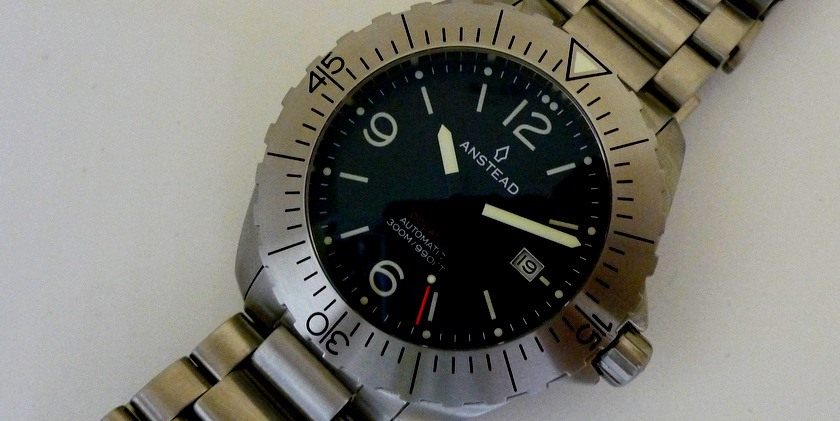 I have written about it here before, and I will say again, that I own an Anstead Oceanis.  The original Anstead Oceanis, as sold on Kickstarter.  It was my first really big (relatively) purchase on that site, my first crowd funded watch, and one of the reasons why I am currently on staff here at WWR; it stirred enough passion in me to offer to write a review, which led to more writing, which led to this gig.  Now Tom Anstead, the man behind the watch, has relaunched it in a way, selling the Oceanis direct through his web site.  But this version, still under the same name, and still “the first of the naval combat series,” is really an improvement and refinement over the original Oceanis, a watch I still enjoy and wear.

I am not going to rehash my review of the original, but I am going to highlight the changes between the two models, and these changes help illustrate how a crowd funded watch goes from a project to an actual product.  The first, and most obvious change, is in the price.  I got in on the early bird tier, so my watch was $250 for an automatic diver with a Seiko NH36a (hacking and hand winding) movement.  When he put the project together, he wanted to put out a watch that rivals others offered at $800.  He aimed for the right mark, I guess, because the retail version of the watch is $799, with free shipping and a 10 day return policy.  The other obvious change was the switch from a leather strap to a stainless bracelet.

I like the leather strap on my watch.  I generally prefer a strap overall, so that may be part of the reason, but with a leather strap, the watch does kind of become self defeating as a dive watch.  Anstead solved this issue with Kickstarter by making a branded silicone strap available for an additional $40 pledge.  I bought one, and swapped out the leather strap for it when I took my recent vacation to Hawaii.  With a stainless bracelet, the need for a second, waterproof, strap goes away, but I wonder if he will bring these back as options or accessories down the road, as they can change the look of the watch.  As for the bracelet itself, it is well done.  The links are connected with screw-in pins, and there is a pinch release to open the buckle, reducing the need for a fold-over secondary lock.  The clasp has a micro adjustment built in with three attachment points so you can adjust the strap by about 1/2 a link that way, and there is a ratcheting expansion link so that the strap can be made large enough to fit over a wet suit sleeve, a key feature if you wan to use the watch for diving and non-diving activities.

Visually, the face of the watch has only changed slightly.  The handset is the same, with pencil style hands and a round dot of lume just back of the red tip of the second hand, reminiscent of a Breitling perhaps.  Five minute markings are done in SuperLumiNova, as well as readable Arabic numbers for 12, 3 and 9:00.  These are a bit more reminiscent of the styling on an Omega, but not an exact match.  A chrome outlined date window is located at 3:00, but gone is the day of the week indicator from the Kickstarter version.  Branding/text is limited to a small line of the company name and arrowhead logo in the top half of the hour, and “Oceanis,” “Automatic,” and “300M / 990 FT” in the bottom half. The 120 click, unidirectional bezel is a place where another obvious change was made between the two versions.  The Kickstarter watch had a sawtooth edge, while the current iteration is gear toothed.   I think that the current style is more refined and easier on the hand without making it harder or less secure to grip.  The bezel on my watch is also tight, something that was solved this go around.  While still secure, it moves freely when turned, making adjustment an easier action.  The larger triangle at “0” is retained, but the overall markings have been made a fair bit lighter and less pronounced.  It makes for a more refined watch in a dress situation, but this is the one place where the original is more readable.

The overall dimensions are unchanged, 44mm in diameter, but the new version includes a crown protector.  It is small enough that it does not get in the way when you are adjusting or winding the watch, but it does provide protection if you are hard on your timepieces.  A sapphire crystal (a nice inclusion at the project price point) is continued through, but this time the crystal is slightly domed, a very nice enhancement over the flat crystal of the original.  The curve of the crystal follows nicely from the angle of the bezel, probably contributing the addition of a little less than a millimeter of height (14.3mm) from the original’s 13.5mm.  Another unexpected detail was the finishing on the interior of the clasp.  It is a minor thing, but I like the machining marks.

Overall, it wears comfortably, but the bracelet does add weight over the two strap options on my version.  It is not so heavy that it stays noticeable, and it is not as heavy as some other divers I have reviewed, but I feel it when I put it on.  The color scheme makes it very readable, and the handset keeps the look of the watch very open.  As I noted above, I do think I prefer the slightly heavier bezel markings of the original, but this version is readable enough, especially when they are used these days more for parking meters than for diving.  I definitely think it is worth consideration against other divers under $1,000.  It isn’t the no brainier of the Kickstarter version at $250, but this is a refined and improved watch over the first go round, and a job well done by Anstead.  ansteadwatches.com

The original (right) vs the current version

slight curve on the cystal