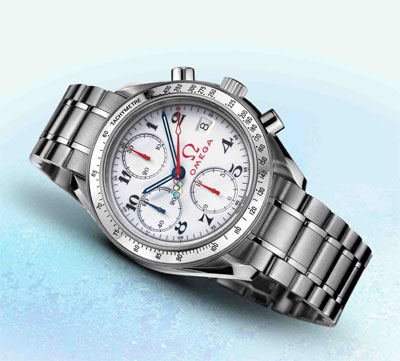 Omega just launched SIX more chronos for the Olympics Timeless Collection. I’m going to go through them all very quickly, but they’re all generally styled like the 1932 pocket watch we just posted and all of them have the little Olympic logo dongle hanging off of the seconds hand. They’re a bit too Rah-Rah Go Olympics for my taste, but to each their own.

The Speedmaster Date in the OMEGA Olympic Timeless Collection has red chronograph hands and blued-steel hour, minute and small seconds hands set against a white dial. Available exclusively with a matching stainless-steel bracelet, it retains the typical Speedmaster feature of a tachometer scale engraved on the stainless-steel bezel and has a scratch-resistant sapphire crystal. This chronograph is powered by the OMEGA calibre 1152 self-winding chronograph movement, which has an exclusive rhodium-plated finish and a power reserve of 44 hours. The Speedmaster Date of the OMEGA Olympic Timeless Collection is water resistant to 30 metres / 100 feet. 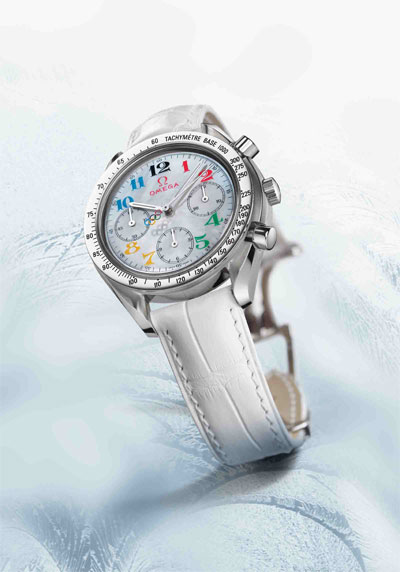 The Speedmaster Ladies’ of the OMEGA Olympic Timeless Collection derives from the original gents’ Speedmaster, launched in 1957 and later chosen by NASA for its manned voyages to the moon. The Ladies’ Speedmaster uses a reduced case size and retains the classic tachometric scale on the bezel. The hour markers on the mother-of-pearl dial appear in the official colours of the Olympic Games—yellow, blue, black, red, and green—and complement the coloured rings on the counterweight of the central seconds hand. The heart of this distinctive model is the OMEGA calibre 3220 self-winding chronograph calibre; the movement’s high-performance winding system ensures a power reserve of 40 hours. This Speedmaster Ladies’ of the OMEGA Olympic Timeless Collection is protected by a sapphire crystal and is water-resistant to 100 metres / 330 feet. Available exclusively with a white alligator leather strap that subtly underlines its feminine elegance. 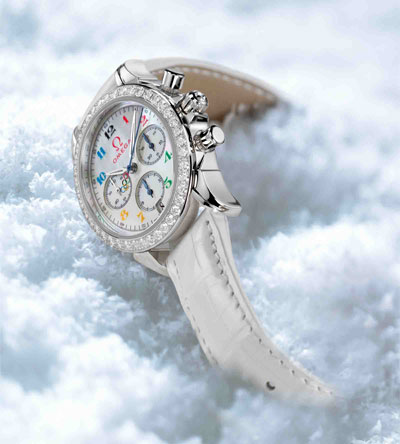 The De Ville Co-Axial Chronograph Ladies’ of the OMEGA Timeless Collection is a tribute to the Olympic Games and a celebration of the fine art of watchmaking. The diamond-set bezel and refined mother-of-pearl dial set off Arabic numerals in the official colours of the Olympic Games, with a diamond briolette on the crown completing the luxury touch. Elliptical counters add a subtly feminine refinement of the popular OMEGA models of the fifties. This superb Olympic Timeless Collection De Ville is powered by the high-end calibre 3313 self-winding chronograph movement, which is fitted with the OMEGA Co-Axial Escapement for better long-term accuracy. The movement’s precision is attested by its chronometer certificate issued by the official Swiss chronometer testing institute COSC. It has a power reserve of 55 hours. Fitted with a domed scratch-resistant sapphire crystal with anti-reflective treatment on the inside, this De Ville Co-Axial Chronograph Ladies’ is water resistant to 100 metres / 330 feet and is available exclusively with a white alligator leather strap. 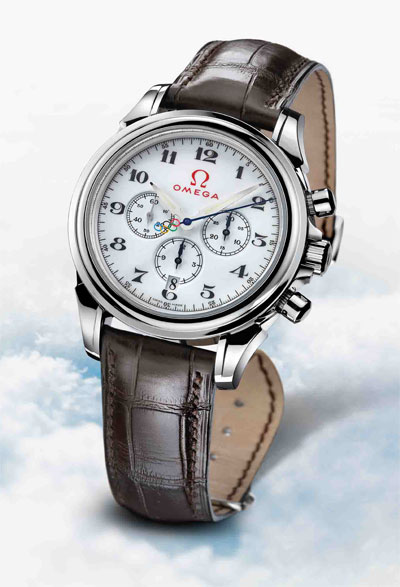 The De Ville Co-Axial Chronograph of the OMEGA Olympic Timeless Collection has a sober white dial, elegantly set off by the thematic design reference to OMEGA and the Olympic Games. The De Ville Co-Axial collection represents the fine art of watchmaking in all respects. Its case design recalls the popular OMEGA models of the fifties; all models feature the revolutionary OMEGA Co-Axial Escapement, which offers better long-term accuracy. The De Ville Co-Axial Chronograph of the OMEGA Olympic Collection is powered by OMEGA calibre 3313, a self-winding chronograph movement with official chronometer certification and a 55-hour power reserve. Protected by a sapphire crystal with anti-reflective treatment on the inside and water-resistant to 100 metres / 330 feet, it is available exclusively with a brown alligator leather strap and stainless-steel foldover clasp. 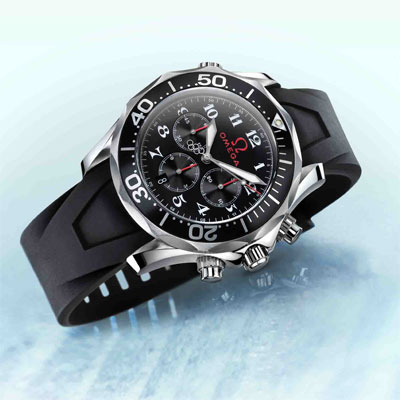 The Seamaster chronograph in the OMEGA Olympic Timeless Collection combines white Arabic numerals and red chronograph counter hands on a black dial protected by a scratch-resistant sapphire crystal. Its distinctive Olympic look is underscored by the rhodium-plated Olympic Rings as the counterweight of the chronograph seconds hand. Its divers’ watch status is underscored by the robust case, the unidirectional rotating stainless-steel bezel, patented OMEGA helium escape valve and water resistance to 300 meters / 1000 feet guaranteed by a screw-in crown with O-ring gasket and decompression ring, screw-in pushers and a screw-in case back. The sporty look of this chronograph, which is enhanced by a tough, water-resistant rubber strap, belies the high-end technology inside. The Seamaster Chronograph of the OMEGA Olympic Timeless Collection uses the exclusive OMEGA calibre 3303 movement. This self-winding OMEGA chronograph movement is a certified chronometer and uses a column-wheel chronograph mechanism – the sign of a truly superior chronograph. 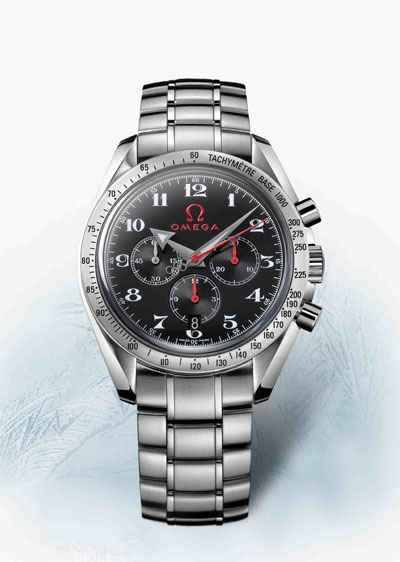 Podcast: Why It’s So Hard to Buy a Rolex (John Gruber...

Rolex claims the supply shortage is not planned, unconvincingly