Hands On With the New Breitling Super AVI 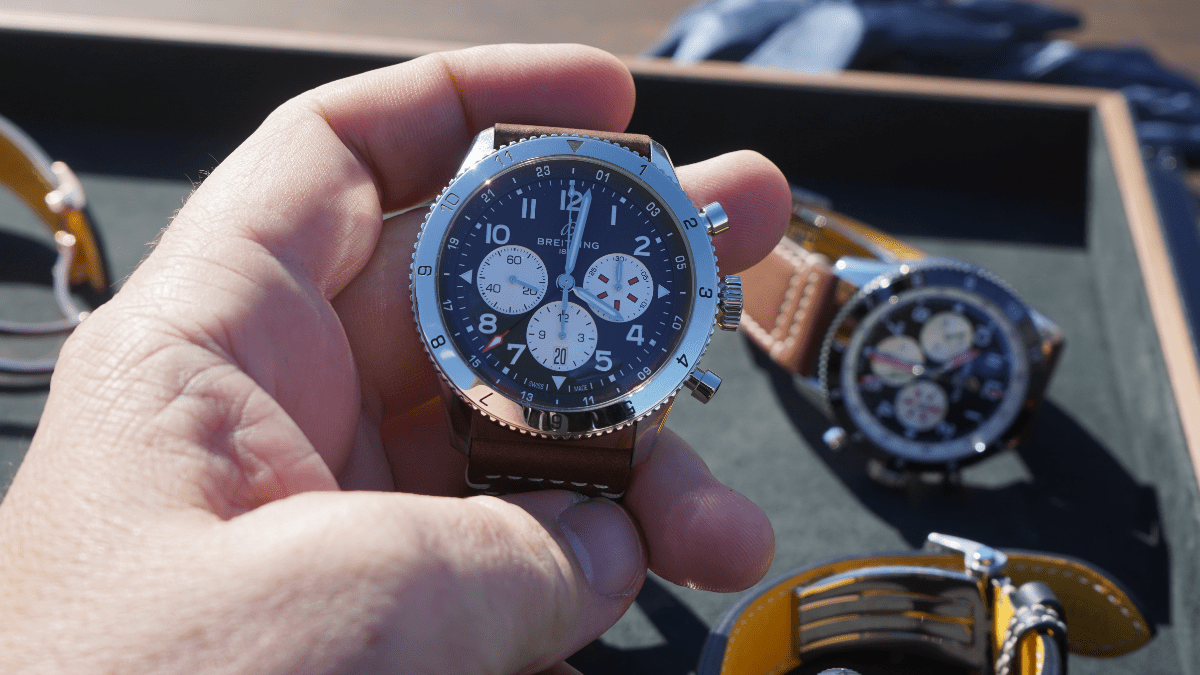 On a sun-bright tarmac in the middle of Dallas a set of four classic fighter planes idled under a late-Fall sky that was nearly severe clear but studded with small clouds. This was the launch of Breitling’s new Super AVI line, watches styled to recollect the P51 Mustang, the Vought F4U Corsair, the Curtiss Warhawk, and the de Havilland Mosquito. These small and light warplanes once dotted the sky over Berlin and Normandy and now they’re collectors items, flown by men and women who strive to keep their unique memories alive. These watches, a set of four unique pieces, were built to continue that tradition.

I flew out to Dallas to check them out and came away impressed. The Super AVI line is based on the 1953 “Co-Pilot” Ref. 765 AVI, a smaller Chrono that was once a favorite of pilots and jet setters. The new watches feature the same styling and radioactivity warning minutes subdial at 3pm but include a GMT hand, date, and a big crown for easy setting.

“This collection embodies that sense of nostalgia for the early days of aviation when pilots relied on their watches as onboard tools,” says Breitling CEO Georges Kern. “But you don’t have to be a pilot or vintage-aircraft buff to appreciate the exceptional craftsmanship and rugged design.”

The watches are quite striking. I love the extra complications that clearly separate this watch from similar flight-oriented pieces and it’s probably my favorite Breitling in recent memory. Each model hints at the design inspiration without being heavy-handed. The Mustang is no-nonsense with a black face and tropical numerals (it also comes in gold). The Warhawk is military green and looks like something that an old Master Sergeant would strap to his wrist. Each piece is a great mix of old and new and even the leather straps, designed to mimic older pilot straps, look great.

Breitling spared no expense with the event, flying in each of the four planes for viewing and even taking a photo where all four took to the skies together for the first time in history. These are all warplanes, let’s not forget, so the entire line has a military feel that might be missing from some other Breitling pieces.

The watches are priced at $10,000 or so and available now on Breitling.com. The goal here, I suspect, is to entice aviation buffs and general military buffs and then potentially convince chrono lovers that these things are worth a look. I personally liked them all (except the $23K rose gold model) and wouldn’t kick any of them out of bed for ticking.

Breitling knows how to do history. These watches are all perfectly calibrated to maximize the nostalgia of bygone flying days and ensure that fans of each of these beautiful planes are well-serviced. They are well worth a look if you’re in the market for a new chronograph and I know I’ll probably be picking one up in the next few months.