Modding the Invicta 8926 and watch brotherhoods 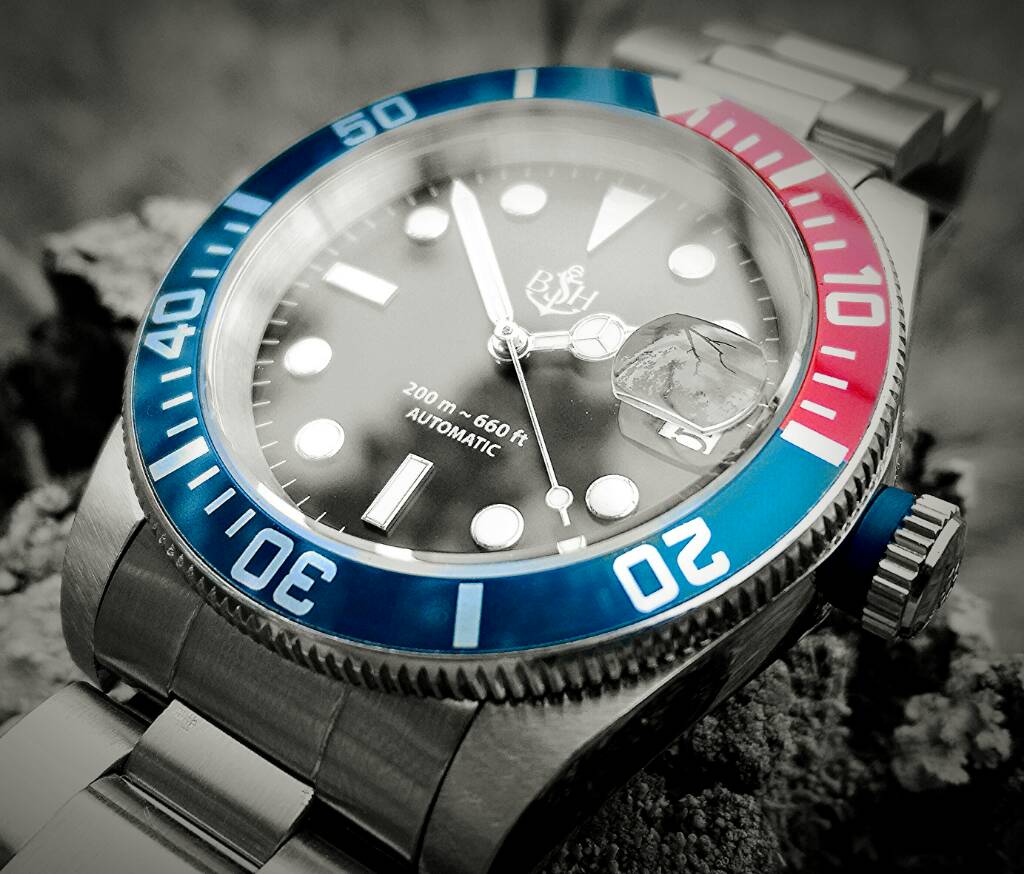 The other day, I wrote about the Invicta 8926OB, and how it was a great little watch for less than $100 bucks. You know what you can do with watch that’s inexpensive? Modify it.

Modding has been around for ages. Various stores and watchmakers like MotorCityWatchWorks or Dagaz have supplied parts and services to modify Seikos for almost a decade. Bill Yao of MKII Watches began as a modifier – making dials and hands for Seikos, and then ETA movements, before cutting off the custom parts business and making expensive high-quality homage watches.

What’s so satisfying about modifying watches is that with a little effort, you can take a watch that’s a little boring and make it great again. Whether it’s changing a dial from a black one to an orange DOXA style, or something else.

So I took the Invicta 8926OB and began to modify it. I did a simple dial and hands mod, where I changed the dial to a BSH dial. A BSH dial is one created for members / participants of a thread in the watchuseek forums called Brotherhood of the Submariner Homages. It’s signed with a very nice BSH logo, with the S comprised of a rope twisted around an anchor. The other dial text is the 200m / 660 ft water resistant indication. It looks nice enough with the Invicta hands, but changing to another set of Mercedes hands or even Snowflake hands really pairs well with the larger indices on the BSH dial.

But that’s not where the mods stop. Most people who modify these watches remove the bezel and take a file to the side of the case, removing the INVICTA branding. With a bit of coarse filing, followed by sanding 400, 800, 1200, 1800, and some green polishing rouge on a cotton wheel, you can make it look like it was never there.

With the bezel off, the more adventurous buy a checquering file and turn the scalloped bezel into a coin edge bezel not unlike the one found on the Tudor Black Bay. Here’s when people change the bezel insert color, or material, from aluminum to ceramic.

By the time the watch is thoroughly de-branded, re-dialed, with new hands, and a changed bezel, it’s a whole new watch, and more than that, it’s customized to your tastes. Prefer the big crown trend of a year or two ago, where everyone was making Rolex 6538-inspired homages? File off the crown guards. Prefer a Black Bay style? Chequer the bezel and replace the insert with a red one. In fact, rbesass in the forums has gone on to make a new run of gilt dials, perfect for pairing with a Black Bay homage case (not the 8926OB) and gilt snowflake hands. The original black/white dial with silver lumed indices was managed by fmadrid.

How does a small cadre, a cabal of unknowns, a crack commando unit, sent to prison by a military court for a crime they didn’t commit, who promptly escaped from a maximum security stockade to the Los Angeles underground, begin such an adventure of watch lunacy?

In the beginning, there was one watch. It began when they decided to do a watch pass-around. One member donated a case, another assembled a dial from a one-off print-out and indices, and a third contributed the case and movement. The dial was printed by Fmadrid. Jelliotz applied the indicies courtesy of a dial donated by Imitrex. Paullyjay donated the case (Parnis) and movement (dg3804b). Jelliotz assembled and had the engraving done, making it truly a group effort. The humor wasn’t lost on them that the first BHST (Best Homage Submariner Thread) watch was a GMT homage. Mark Kiger contributed a stealth big crown sub, a dark-dialed 6538 homage with mil-sub hands after a prototype Rolex never put in production, with printing on the dial that was only really visible in the right light.

The logo was created by fmadrid, with a careful guidance from Justadad, Fullers1845, and Jelliotz. Once the logo and dial design was done, it was printed it on photo paper, then sent it off to jelliotz in the States. He finished the dial off by reinforcing the photo paper with a real dial plate and attached raised lume dots taken from a donor dial. it was a beautiful watch.

The watch was a big hit, and fmadrid kept making paper printed dials for a while. Eventually, he was convinced to make it a reality for all the members. Around September of 2015, fmadrid contacted Dagaz watches and Helenarou and by October of 2016 for delivery, they’d made a run of date and no date dials for members. Managing a project is never easy – there are always delays and difficulties the first time.

Recently, a run of gilt dials have been made by rbesass, suitable for a Black Bay style case. It’s another interesting development, and just shows how modification captures the imagination around cheap watches, and brings people together to appreciate these little mechanical wonders.

That’s the beauty of this little corner of the gargantuan WUS forums – it’s created a brotherhood of sorts, and all you have to do to join is start participating, and share a picture of a diver style watch. There are days set aside for different types of pictures, heavy-metal-Monday for bracelets, 3-6-9-Tuesday for 3-6-9 watches, Whatever Wednesday, and so on. I’m still trying to make Leather-Sub-Sunday a thing.

And that’s the point of all this – fans of watches, forming friendships over forums, and creating things together that make owning a watch fun. Sure, the watch isn’t a huge investment – it’s not meant to be. It’s good fun, comraderie, and having the freedom to change things up.

my own mod – new hands and dial in progress

One thought on “Modding the Invicta 8926 and watch brotherhoods”