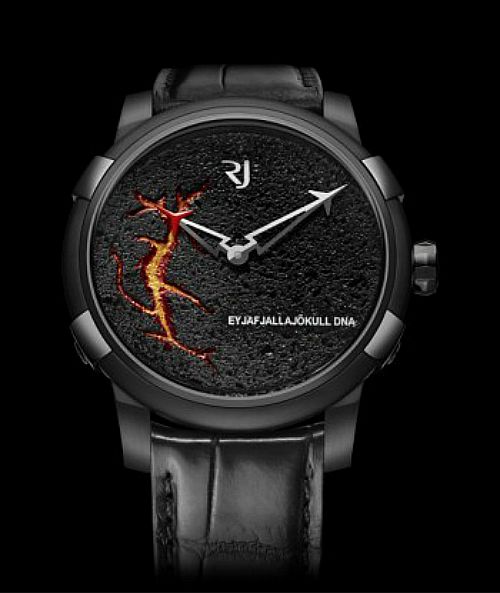 Romain Jerome does things… differently.  Their latest watch is a commemoration of a grand geologic event, that happened to ground air traffic in Northern Europe for 6 days.  The Eyjafjallajökull (Icelandic for “Island mountain glacier”) volcano erupted in April 2010, creating some spectacular images, but also producing an ash cloud that disrupted air travel in Europe.  The watch is part of the DNA series, meaning that it contains a part of the namesake, in this case volcanic stone.  This iteration, with an Evo designation, is the third in the line, with a black PVD stainless steel case. As with the previous versions (above and below), it is offered in a limited edition of 99.  The EVO model is 43mm, slightly smaller than the two previous versions with steel and stone bezels, which measured at 46mm.  The red molten lava, rendered as a hand laid enamel, is still shown through a fissure in the face, and the hands are a reminder of the air traffic that was grounded by the event.  The movement is an unspecified Romain Jerome mechanical self-winding movement. The Evo is presented on a black alligator leather strap, as opposed to the previous versions on crocodile straps.  Common through the line, and through almost all the company’s offerings are the 4 paws clenching the bezel at 2:00, 4:00, 8:00 and 10:00.  The caseback is engraved with a map of Iceland.  I like the watch a lot, more so than the previous two in the line because the bezel is a bit more understated, but then I also like most everything that the brand produces.  romainjerome.ch