John just posted a video showing how close the quality in fake watches is coming to those of the genuine ones they replicate. I want to respond here. In fact, I’m a little angry.

First, let’s get this out of the way: replicas are at once beloved and reviled. They’re beloved because they let someone with a limited budget to enjoy the experience of a nice watch. They’re reviled because, quite simply, they make people who paid full retail for a Rolex or Patek feel bad. In the language of consumerism a replica is a shortcut and we all hate folks who take shortcuts, don’t we?

So let’s go back to the original video. It was very good. It shows that Rolex is no longer the only company that can make a Rolex. That’s scary and fascinating and valuable information for the watch buyer.

Small details like the laser etched crystal, blue anti-reflective coating under the cyclops date magnifier can contribute to the giveaway, but if you don’t have a genuine watch to compare to side by side, it becomes harder to tell without taking the case back off. Even then, it can be difficult: there are both replica movements, and people who purchase genuine movements for their replica-cased watches. Think about the math for a moment – if a genuine movement costs about $2,000 and the case is perhaps two or three hundred, even with the added costs of dial, bezel insert, genuine crystal, crown and crown tube, you still end up with a very good looking watch for less than the watch costs from the dealership. It’s not authenticated, but it would be nearly indistinguishable for all but the authorized service center that can check serial numbers against case and movement.

What was nice to see about John’s video, above, was that it was so even-handed, giving credit to the replica for quality where it was deserved. There are other videos, like those from our esteemed and reputable colleagues at Crown and Caliber, who chose to pick a much worse example.

First, I wish C&C had picked one of the better replicas for the challenge. Picking a Canal Street watch for the challenge may be representative of what “my-first-replica” customers buy, but there are so much better reps out there. As the video from John’s article shows, there are watches that are nearly indistinguishable until you look at the movement.

The other annoyance with the Crown and Caliber video is the borderline racist “I would not trust Mr. Wong with my watch” statement. Give me a break. Asia is one of the largest growing watch markets in the world, and has watchmakers who can service watch movements just fine. Crown and Caliber’s statement in the video is not only bullshit. It’s a bullshit statement in a bullshit video. 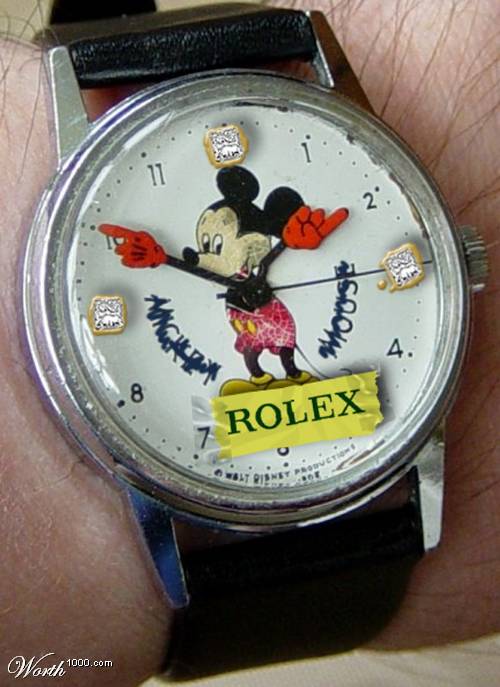 We should want to highlight the best in watchmaking, whether it’s the Swiss, Japanese, Chinese, or Americans giving it a go. There’s no sense in making the watch-appreciating community smaller by mocking watches from a specific country.

They can copy just about every detail on Rolex these days. It comes down to how much you wish to spend in order to do it. Rolex use some expensive manufacturing methods, and those can be the places that replica makers take shortcuts, in order to retain their margin. There’s a surprising amount of work to get the details right, it’s pretty easy to get 80%. It’s the last 20% that you go nuts trying to get manufacturers to produce properly.

Let’s go back to the the Crown and Caliber video.

“A lot of fake watches will try to cut corners by putting in glass or plastic crystals over the dial, which you can identify pretty easily by roughing it up a bit (or even tapping on it).” To this, I have to say, “Yeah, no.” If I have a watch, even a shitty fake one, the asshole is the person who scratches at the crystal to prove it’s bad.

Watch collecting is a commercial endeavor, not the Yalta negotiations. If I’m happy to run around with a fake Movado what do you care? You know that you own genuine pieces but why damage my piece? Heck, I’ve heard of people going into a watch repair shop (really a battery change shop) with a watch they didn’t know was fake, have the person behind the counter recognize it as such, and then witness the repair guy take tweezers to pull out the balance wheel, destroying it. I don’t care if you don’t want to repair a replica, but it really pisses me off that anyone would recommend destroying property they don’t own.

Back to Crown and Caliber’s video.

“A fake watch will never have the real thing inside—too sophisticated, too expensive to reproduce. But they’ll substitute where they can, bringing in more cheaply-manufactured movements (like the Miyota movement we found in our fake). Sometimes they’ll try their hand at replicating the movement too, so be prepared to look pretty closely when you scrutinize.”

I see a contradiction: the movements are “too expensive to reproduce” and “they’ll try their hand at replicating the movement too” – which is it? They don’t know. But I do, because there is a mostly one-for-one movement replica of the Rolex 3135. May I present to you, the Yuki 3135.

The balance bridge isn’t identical, but it can be serviced with genuine parts. People have bought them and serviced then with parts to make the GMT 3186 / 3187 movements. It’s akin to buying an aftermarket engine for your car.

The Crown and Caliber guys did a lousy job. They were having more fun entertaining themselves than actually evaluating replicas versus genuine watches. The Watchfinder video from John’s link is much better. Also good as a comparison is this one from TimelessLuxWatches.com.

A valid question is why are people putting their effort into making replicas when they could be making their own watches of obviously high quality? The answer I suspect is that the market isn’t with them. Establishing yourself as a microbrand and maker of homages (because again, the market is there) is a little harder, and everyone looks at you with skepticism, when as a replica maker, the skeptics weed themselves out, leaving a customer base.

Here’s where I’m going to leave this: The most important watch is the one you want to have on your wrist. The most important thing to maintain is personal integrity – wear your replica watch, but don’t tell people it’s real, and don’t sell it on as if it were. As the watches are getting better and better, and it’s entirely reasonable to wear a good one to try out the feel before making the payment on a genuine one, I have a hard time accusing wearers of being evil (as some watch fans do) – instead, it helps you learn what you like to wear, and appreciating the mechanical genius that makes any of these things work at all.

Car collectors can collect replica Alfa Romeos and Porsches. Plane collectors fly replica Spitfires. As long as they don’t pass them off as real, as long as they aren’t so shallow as to point to a replica as a “status symbol” and accept that they are enjoying a product that is either difficult to acquire or in fact impossible, then there is nothing wrong. The manufacturers will grunt and say that it is an affront to their hundred year tradition of quality. When they do that they are trash-talking up-and-coming manufacturers that will soon replace them. For every Rolex there are a thousand Miyotas and it will only get worse.

Watchmaking is shrinking. The watch-collecting world is contracting. Attacking whole segments of people in the fandom is not a winning strategy to get more people to appreciate these mechanical wonders. If we say aspiration is cheating then we’re all losing the game.

10 thoughts on “Thoughts on the replica watch discussion”