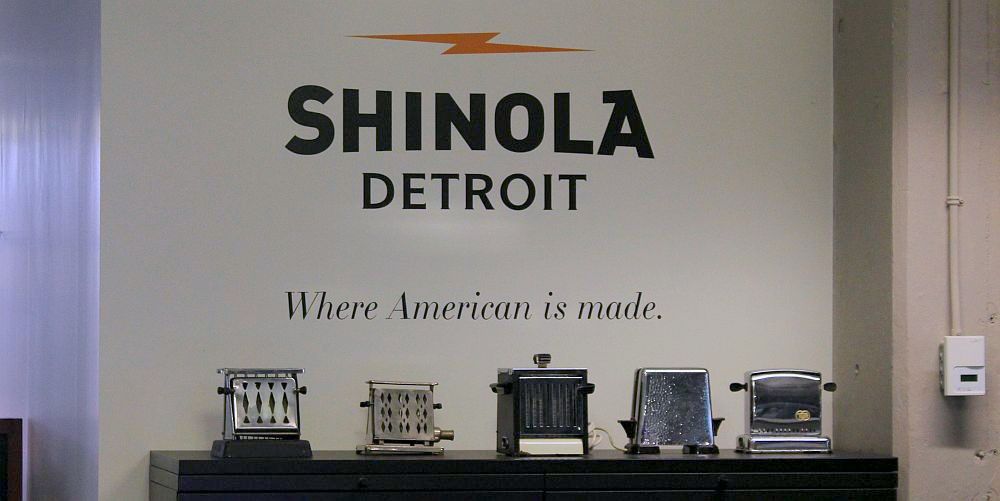 As any longtime reader of my writing will know, I have a soft spot in my heart when it comes to Shinola. I am originally from outside of Detroit, and had been intimately familiar with manufacturing and automotive, and the impact the downturn has had on those industries, and the people involved in them. Will one single brand setting up shop in Detroit revitalize things on its own? No, it won’t – but they can certainly lead the charge to a revitalized – and skilled – manufacturing base in the city. On the day we went to visit the Shinola Factory, it was actually a pretty quiet day. There was an extensive training going on, so most of the floor was actually pretty quiet. Where we started, however, was quite bustling with activity. That was with the leatherwork part of the operation. You do not hear a lot about this part of their operations, but as I learned, it’s no small bit of what they do. The first thing we saw being made were straps, from the raw blanks up through things being sewn together and edge finishing being done. The exact number escapes my memory at the moment, but there were an astonishing number of steps involved in creating a “simple” leather strap. They were also producing a variety of other leather goods (including a passport wallet that was being released not long after our visit). As it turns out, Shinola is making the vast majority of their leather products there in the Detroit factory. The baseball gloves are the exception, but it sounds like everything else made from leather (by the way, that part of the operation smelled as amazing as you might guess), is made there. To facilitate that, they have a master craftsman coming in regularly to train the employees in the skills they need, and there is a separate R&D portion that allows them to explore new designs. For me, the leatherwork was the surprise of the visit, because we hear so little about it in the watch world. Speaking of the watch world, we did visit the assembly floor for the watches (complete with getting garbed up to keep from contaminating the process). While things were quiet, we did still get to see watches put together, and saw pieces of movements staged and ready to be built. This part of the operation has gotten a lot of attention, especially as of late with the ruling around the usage of the “American Made” label. In talking with our guide, this has become mostly a marketing issue, and changing the language we use. In the watch press, I think it is easy to jump all over the brand for the use (or mis-use, if you fall in that camp) of the American-made, Made-in-Detroit labels. In the midst of all that, it is all-to-easy for one to forget that it is not some faceless, automated, corporate entity that are making these products. There are men and women putting these movements and watches together, and from what I saw, doing it with a smile, willingly explaining to my oldest daughter what was going on. And while I myself am no watch maker, the finesse (and speed) that they were working with is something I could certainly not replicate any time soon. Is the parent company of Shinola trading on the history of the brand? Sure, they are, and they have also capitalized on the Detroit story. Those are all marketing angles, though. When you get down to seeing these products being designed and built, they’re regular folks doing a job, just like you and me. Evaluating watches from afar is something that separates us from that work, and being cognizant of what goes on. I know I have my own preferences for seeing things made (due to my own manufacturing background), but I think tours like these are invaluable. Sure, the Shinola visit may not be a technological wonder like some of the Swiss factory tours may be, but there is still value in seeing how a thing is made, even if it’s “just” a quartz movement. There is a skill involved here, whether it’s building a movement, assembling the watch, or creating some really nice leatherwork. A skill that many of us could only hope to replicate in our own home workshops. While I had originally intended this to just be a writeup of what we saw and did on the tour, it looks like things have taken a turn here – sometimes the writing process will do that to you. Specifically to the Shinola tour, if you find yourself near Detroit and have the time, try to get in there and see what they are doing. It may not change your mind about Shinola products, but you can at least appreciate what they are doing, and can put a smiling face behind that lightning bolt logo. More generally, being aware of these manufacturing process is of benefit to us all. If you cannot get out to a tour, check out videos, and look for other manufacture write-ups. They can help you put this all in to context. While there are certainly some smaller, independent brands that I would say are creating things more artistically, a vast majority of what we all see is something of a more industrial style, be it large- or small-scale. Whether art or manufacturing, these visits (or videos and writeups) help us keep the end product in the context it was produced, and I think can help us be a bit more even-keeled about when we hear about some of the marketing-driven stuff (positive and negative) coming up.  shinola.com