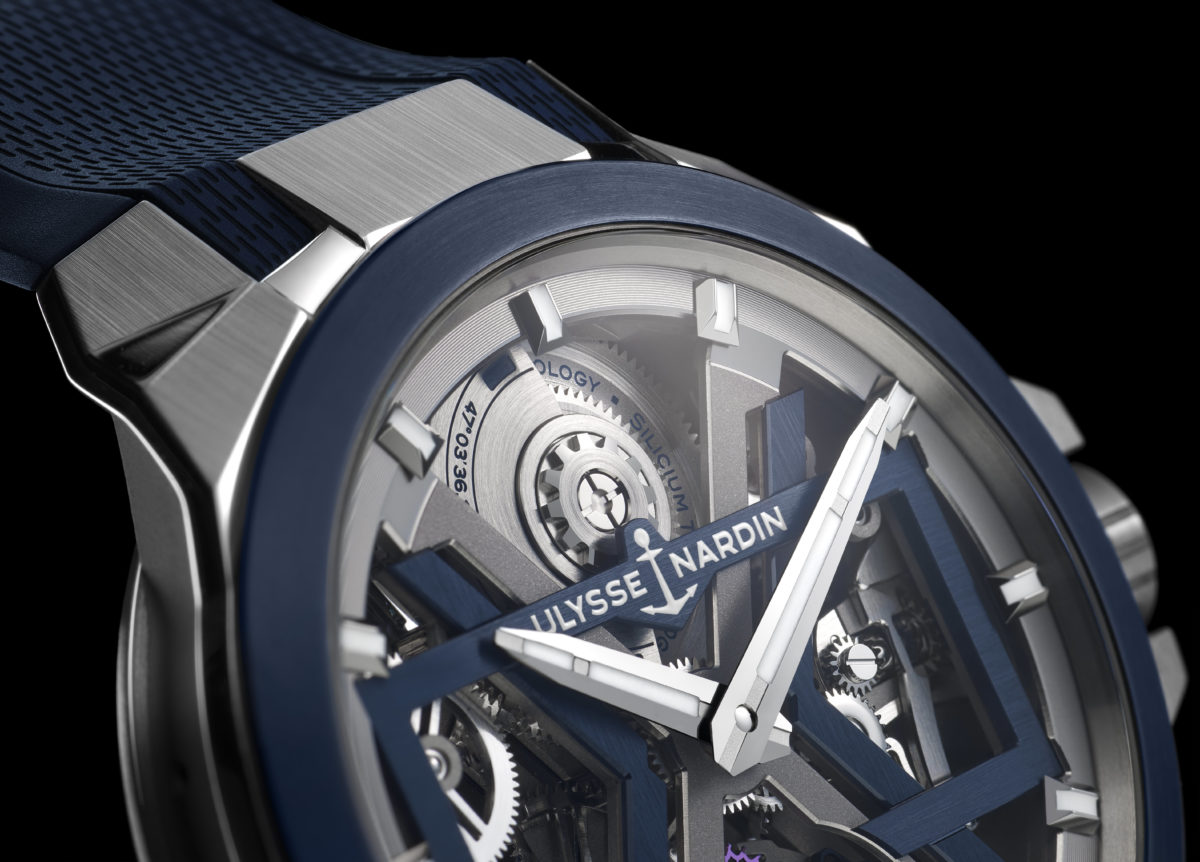 With a name that sounds like something a Tintin villain would say, Ulysse Nardin has launched its latest watch, a $44k skeletonized beast featuring “the complex, geometric architecture of the tessellated horns ? reminiscent of furtive aircraft ? create a pumped-up, vigorous and imposing masterpiece.” It’s called the BLAST.

As you can see, the BLAST offers a bit of a Big Bang feel with a huge case and massive face. Let’s go back to the press release for some more breathless prose:

With its tight, edgy blueprint, omnipresent ?X-Factor? and stealth design, the new?BLAST???a fresh, muscular and robust open-worked model ? will send you rocketing into?the?stratosphere.?BLAST?is taking your mind by storm, playing off the transparency of its new powerful automatic silicium tourbillon nested in a bold, X-shaped cage, which beats inside at a frequency of 2.5 Hz. Light penetrates the open-worked body of the watch like a laser. Some Ulysse Nardin emblematic codes have been included ? the rectangular frame, the 3-horned signature fixing the strap, the smooth, colored bezel, the verticality of the movement with the barrel at 12 o?clock and the flying tourbillon at 6 o?clock.

This distinctive look ? modeled on the same lines as a stealth aircraft ? is the latest proof of Ulysse Nardin?s aesthetic prowess. Aeronautical and military engineers have created furtive aircrafts with aligned edges and serrated triangular patterns to make them invisible to radar and to deflect radio waves. The Ulysse Nardin designers have restyled and rebuilt the watch horns making them strong and geometric like the sharp wings of a stealth aircraft as it slices through a storm. Smooth yet muscular, the horns are aerodynamic and imposing, much like the sharp rocks that jut out of a volcano. Each triangle has a different finish, the surface of the horns alternating between polished, satin-finish and sand-blasted veneer. The result is a shock to the eye and the effect otherworldly, like the lunar landscapes of black, cold magma that surround a volcano and glisten under the light of the moon.

There’s a lot more but I’ll spare you. The watch runs a UN-172 tourbillon automatic movement and features a front microrotor.

It comes in white, rose gold, black, and blue.

Honestly I think this is probably UN’s next big hit. Given all the features, the design, and the size, it could take on some of the big boys when it comes to ostentatious watches – and I mean that in the most loving sense. Why go 43mm when you can strap this thing on and hit your superyacht?

As we mentioned before, this thing will cost about $44,000 so this is probably as close as any of us will get to it.

Ulysses Nardin gets into the spirit of Summer

One thought on “BLAST! Ulysse Nardin has a new watch”