Forget the rings of Saturn, we’re all about the Patrick Adair Stardust Ring 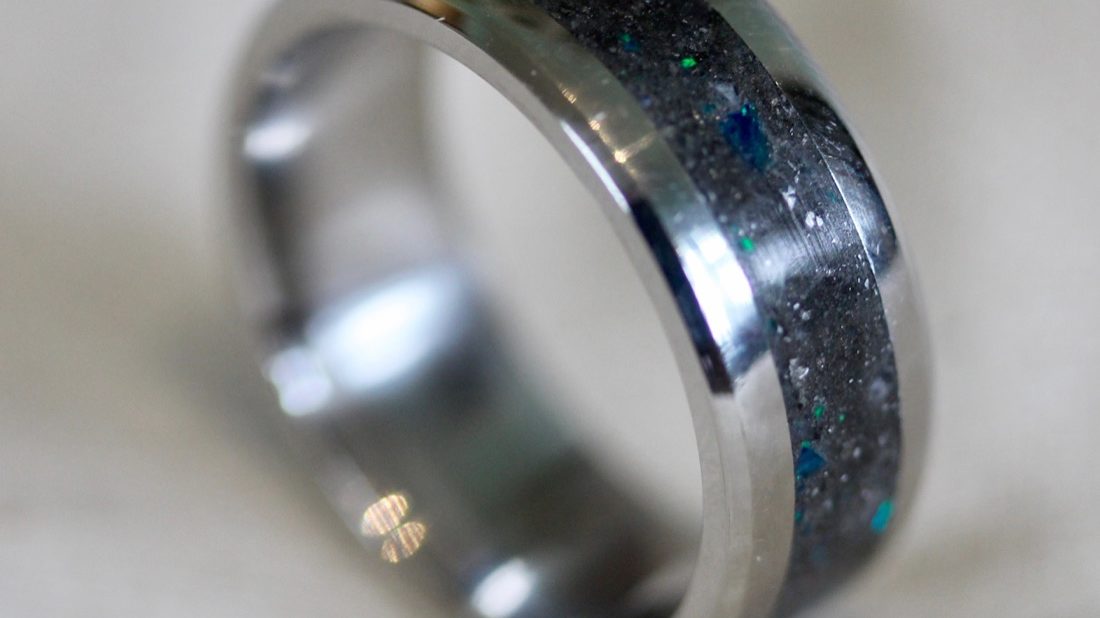 We’ve reviewed a number of rings here on WWR, and there’s a group of makers that I’ve started following a little more closely. Interestingly enough, they tend to collaborate together as well on projects, and that led me to an introduction to Patrick Adair (great name, in my book). Well, long story short, we were able to get one of his Stardust rings in for review, and it is quite out of this world.

A number of the rings we’ve reviewed (here, here, and here) have relied on carbon fiber with luminous layers baked into the construction before the rings are made. If you’re looking for something that glows, though, that’s certainly not the only route you can go. There are options when it comes to inlaid rings as well. I’d long admired some rings with inlaid crushed opal, as it makes for quite the display. In that same vein, but a touch less flashy, is what you’ve got in the Patrick Adair Stardust Ring. Here’s a video on how one is made:

From the description of the ring (in the video, and see below), the Patrick Adair Stardust Ring is looking to evoke what may happen as the result of a cosmic collision or explosion. From the photos, I expected quite a dark inlay. And in some lighting, it is. In other lighting, though, it’s a bit lighter in tone. It was that lighter tone that I first saw it, and it called to mind a sandy beach, which can also have some sparkles and glimmers of color from rocks or sea glass. It becomes a fun exercise, then, to see where you can find these flashes, and makes it so you can actually focus on something as you fiddle with the ring (if you’re the sort to do that).

Many of the rings that look like this (with an inlay) will use tungsten carbide (and I actually have one of those as well), but that’s not what’s used here. Instead, you’ve got cobalt chromium on hand, which is used in all sorts of crazy high-end (and high precision) applications. For the ring wearer, the important things are scratch resistance (similar to tungsten carbide) and it being less likely to crack if it gets hit (say, banging into a door jamb). It also doesn’t oxidize, which means it’ll keep that bright, clean look to it.

Obviously, all of that starry, sandy, crystalline stuff is set into the ring using resin. That’s where things get really fun, as there’s a glow material mixed in as well. So, when the lights go down, your ring lights up. In our case, it was a greenish blue glow that is a hue rather familiar to the watchfam, I do imagine. It’s not a blinding glow (like your Orange Monster LINK) – but while it’s soft, it’s noticeable. Of course, if you’re out in the sun and come inside, you’ll notice it shine through a little bit as well, even in daytime.

Since I’ve had the Patrick Adair Stardust Ring, it’s been all but a permanent fixture on my finger, and has even made it’s appearance in the lime shots of some recent watch reviews. What I rather like about the ring is that it has the appearance of a traditional ring. By that, I mean you wouldn’t know the glow is hiding there, nor that it’s using the space-age material for the main body. It looks like a silver, gold, or even platinum ring that you could find at a local shop, but it’s so much more than that. Almost hiding in plain sight, if you will. The carbon fiber rings are great for lightweight, colorful options for sure. If you’re looking for something with a bit more of an upscale look and feel, something like the $345 Patrick Adair Stardust Ring (or his other inlaid rings) are worth checking out. patrickadairdesigns.com

The inlay for the Star Dust Ring is made using crushed diamonds, moonstone, meteorite shavings, a dash of blue opal, and aqua glow stone. The end result is meant to look like a ring that was crafted from the debris of a massive cosmic explosion. This mixture is inlaid into a Cobalt Chromium ring base. Cobalt Chromium is a super-alloy often found in jet turbines and medical implants. It has a scratch resistance similar to Tungsten Carbide but is much more resistant to cracking from hard impacts. It never oxidizes making it a great choice for a ring that is meant to be worn every day. It also has an exceptionally white color similar to platinum.

A different way of tracking your money, courtesy of the Ekster Parliament Wallet

Slippers for high-performance comfort: Timeslippers on the feet review