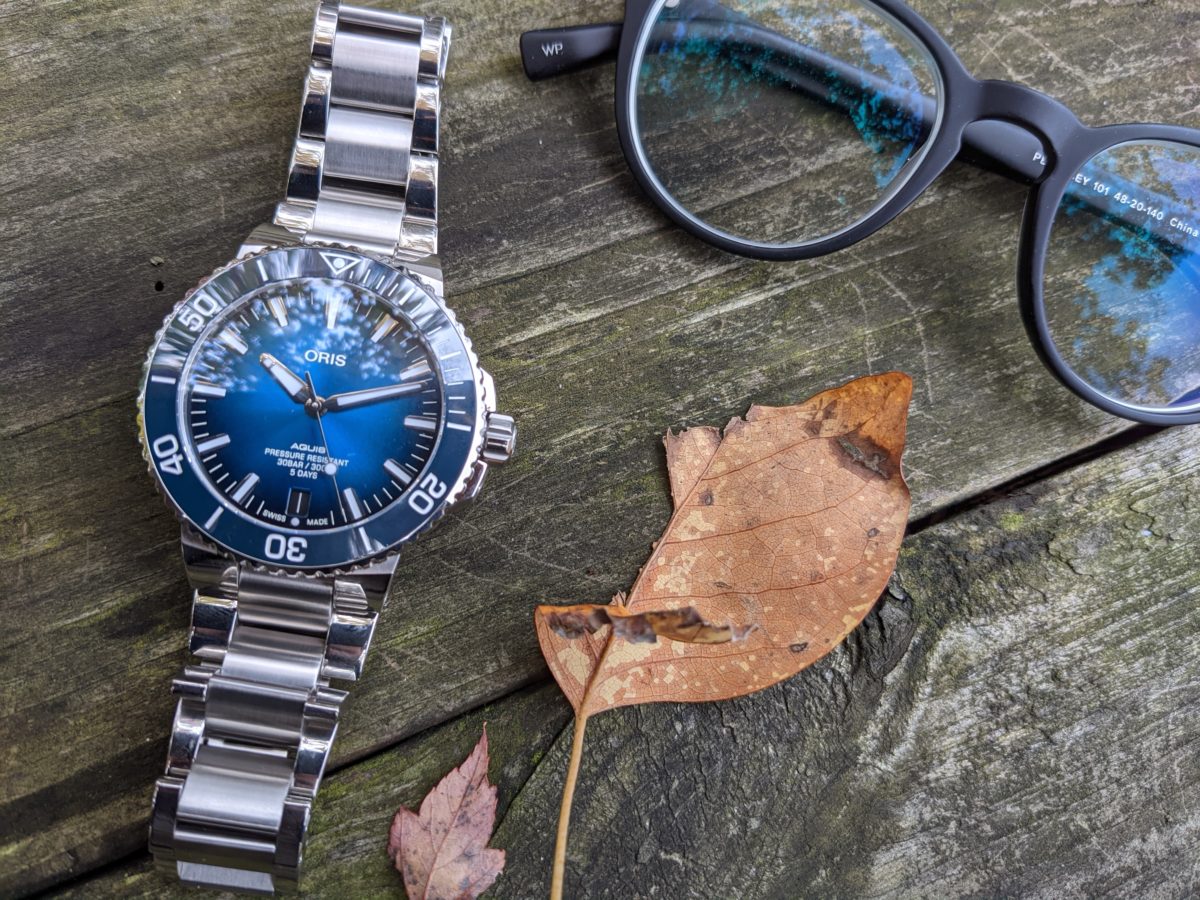 This has been a rather strange year for any number of reasons, but Swiss watchmaker Oris intends to end it on a high note with the Aquis Date Calibre 400, a handsome blue diver that is the first watch to be powered by its new in-house Calibre 400 movement. Going in-house rather than off-the-shelf necessarily adds expense, but there?s a certain cozy feeling you get knowing your entire watch, and not just its exterior design, comes from one and the same shop.

The Aquis Date Calibre 400, which Oris loaned us a few days ago, very closely resembles the non-Calibre 400 Aquis Date. In fact, outside of the descriptive lettering at the 6 o?clock boasting of its mighty 5-day (aka 120-hour) power reserve and, naturally, the (very pretty) movement as seen through the exhibition caseback, you?d have a hard time telling the two apart. That?s a good thing. At 43.5mm, this is a well-proportioned yet masculine watch that wears smaller than it reads, which is more than welcome if, like me, you?re cursed with tiny wrists. It?s very annoying, let me assure you.

To me, a big part of that masculinity comes from the angularity of the case and lugs: they are sharp and purposeful and make no attempt to hide. I like that. The same can be said of the crown guards, which jut out from the case without a care in the world while not quite dominating the watch like, say, the Willard?s do. I could pop out and screw in the satisfyingly chunky crown all day long, so smooth and pleasant is the threading.

Oris calls the dial color ?gradient blue,? which feels about right. When viewed head-on the dial transitions, from the center outward, from a light to a dark blue; there?s a subtle starburst effect when the watch is shifted about. In certain lighting conditions (such as when my Philips Hue Go lights are set to the ?bright? color temperature) the dial gains an almost aquamarine quality to it.

And while my overall feeling toward the Aquis Date Calibre 400 is positive, there are a few nits I?d like to pick. Nits is a good word to use, actually, because I?m not especially impressed with the lume here. I mostly live in the $1,000-ish realm when it comes to watches I personally own, and I have several watches in that neighborhood that handily outperform this Aquis Date. I?m obviously not suggesting that anyone will confuse, say, a $300 Seiko or a trendy microbrand with a luxury Swiss timepiece, but as someone who?s relatively new to watches the dullness of the lume surprised me. I also found it pretty difficult to remove the links in the bracelet, which, admittedly, is a temporary problem, but one worth noting.

Now, the Aquis Date Calibre 400 retails for $3,500 on a bracelet, which is on the higher-end of watches we usually talk about at WristWatchReview. If you?re smitten with the design but don?t necessarily want to spend that much Oris does offer a non-Caliber 400 Aquis Date for $2,200. This model uses the Oris 733 movement (which is based on a Sellita movement), and has 38 hours of power reserve versus 120 hours of the Calibre 400–but you lose the warm and fuzzy feeling of wearing a brand new, in-house movement. And or course, if that is too much for you to consider right now there are plenty of more affordable divers from both large and small companies that may be worth your while, including options from the likes of Seiko and Phoibos.